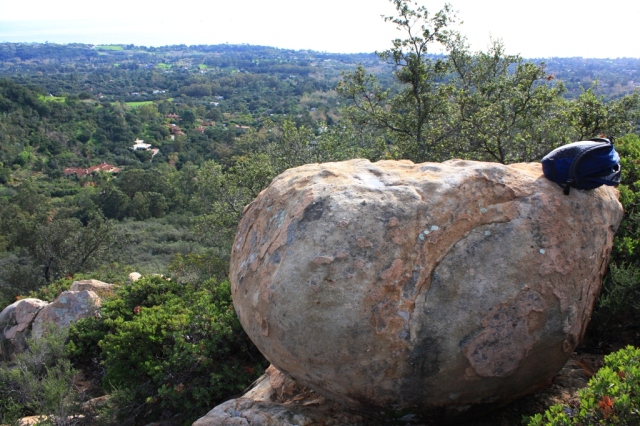 Pushed from the right side, the boulder rocks back and forth. The backpack is to note scale.

About fifteen years ago, I was scrambling through the chaparral and up the sandstone studded ridge on the west side of the mouth of San Ysidro Canyon in Montecito, and came across a boulder. I don’t recall why I stopped at this particular rock, as it is little different than all the others, but something about it caught my eye.

It was perched precariously on a stone ledge overlooking the creek far below. Perhaps it was the mischievous little boy’s mind in my otherwise adult body that drew my attention to what looked like the king of all boulder rolling opportunities. For it is the quintessential boulder of a Wile E. Coyote and Road Runner cartoon. Whatever it was it lead me to lean against the massive gritty concretion and give it a heave. And it moved.

It rocked forward and then gently settled back into its prior position. Holy crap! I thought. This thing is ready to roll. The boulder rocks back and forth with little effort, and although I really wanted to see if I could heave it over the ledge, and watch it crash its way down the brush covered slope and slam into the eucalyptus trees in the creek below, I was concerned that, yeah, this thing really is ready to roll and I could actually push it down the canyon, but it could flatten somebody like a pancake if it hit them.

I have since found that, although the boulder is teetering, it is impossible to set it rolling in its current state. There is just enough of a sandstone lip underneath it to hold it in place despite its rocking, but it wouldn’t take much to make it so it could be rolled.

How did it come to rest in its present unsettled state? How long has it sat there? A thousand years? Five thousand? How long will it continue to sit there? Who knows?

The faint red circle to the top left of the boulder notes the trail (dirt road) far below.

The boulder, noted by the faint red circle, seen from the trail below.

Just up the ridge from the boulder there is an unusual rock with a window-like hole overlooking Montecito. You can actually sit in the little pocket and look out the window.

At the foot of this rock formation there is a vernal pool, which due to the recent heavy rains is filled.

The reflection off the vernal pool. This photo has been turned upside down. The lower portion of the rock on the left, slightly out of focus, is not a reflection.

View from rocky ridge looking up San Ysidro Canyon. The road cut on the right is an Edison access road. 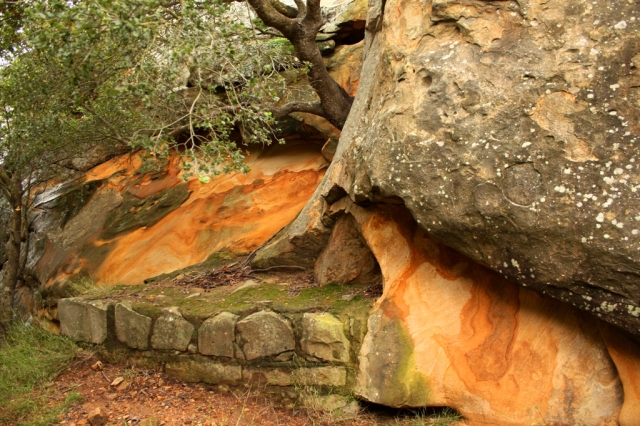 Some sort of old stoneworks cemented against the sandstone outcrop at the base of the rocky ridge and just beside the creek.

3 Responses to The Teetering Boulder of San Ysidro Canyon