Earlier this week I took a walk along the north end of Cold Springs Trail for an out-and-back day trip down to Mono Camp from East Camino Cielo Road. 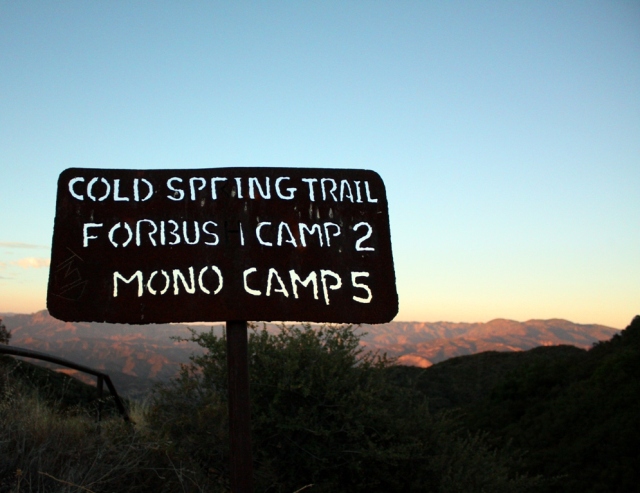 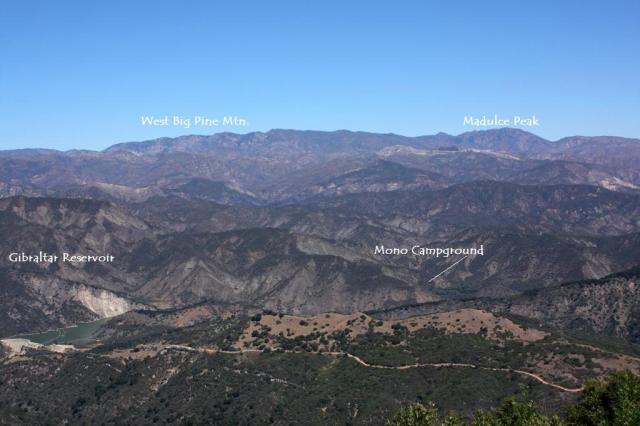 Surveying the target for the day from East Camino Cielo Road along the crest of the Santa Ynez Mountains.

I stopped by Forbush Flats. The campground was founded in 1934 and named after Frederick Washington Forbush, a settler that built a cabin there in 1910.

Under the terms of the Forest Homestead Act of 1906, a settler could file a claim on parcels surveyed by the Government Land Office (GLO) that were within the bounds of the national forest, which was established several years earlier in 1903 as the Santa Barbara Forest Reserve.

To secure a claim a homesteader paid a nominal per-acre fee and had to reside on the parcel for several years or at least keep it occupied. In addition, they had to improve the property, which typically meant building a house and cultivating the land. Within five years they were required to be “proved up” with the GLO, which meant filing proof of their capital improvements and thus fulfillment of the contract. At that point a homesteader gained title to the land and owned it outright. This old defunct law is why today there are private inholdings within the Los Padres National Forest.

On the old Forbush homestead plot a few pear and olive trees still grow in the tiny orchard he planted long ago. The pear trees look remarkably lush right now after the abundant rainfall this season. Planted on a flat on the north slope of the Santa Ynez Mountains, and near a reliable stream, they’ve managed to survive nearly a century of neglect and sweltering backcountry droughts. ‘Ol Freddy Forbush chose his plot well.

A view looking toward Mono from the ridge between Forbush Flats and the Santa Ynez River. 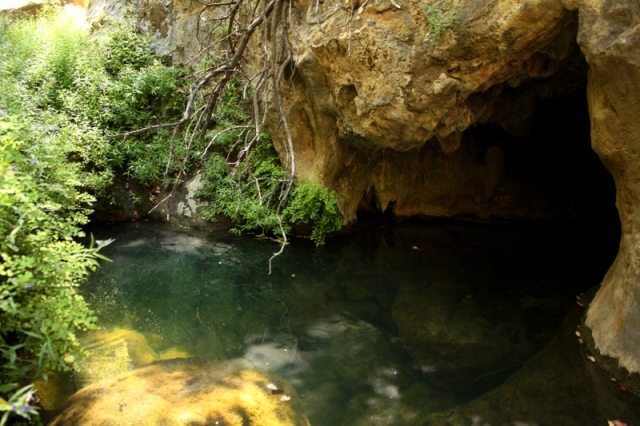 There are several small pools along the trail between Forbush Flats and the Santa Ynez river.

The Santa Ynez River bed near the Mono Creek confluence. The trail crosses the river and continues through the cottonwood forest known as Mono Jungle. 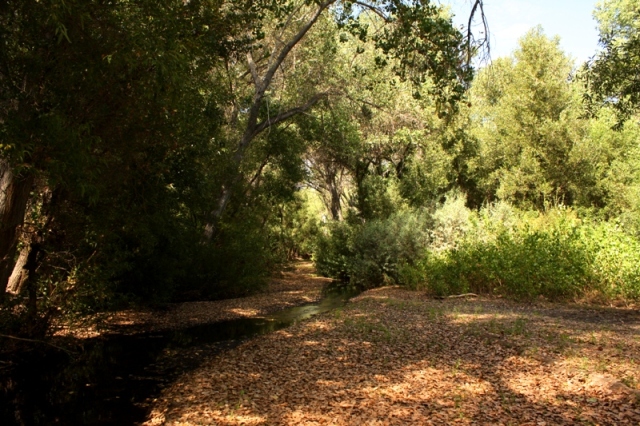 Following a finger of water downstream through one of the few openings in the dense snarl of plant life that is Mono Jungle.

I stopped for lunch somewhere deep within the cottonwood forest. I’d been paying attention to the surroundings as I hiked and stopped frequently to get a good look behind me at my back-trail. But while eating I felt the uneasiness of uncertainty creeping at the edges of my mind. I had lost the marked trail a little ways back and had been following the stream down canyon, but wasn’t sure if I was in the Santa Ynez River bed or Mono Creek. I figured I’d keep heading downstream.

The sprawling stand of massive cottonwood trees goes on for acres. Under the canopy, with no sight of the surrounding mountains and all the old logs and bushes and vines everywhere obstructing the view, it’s not easy knowing where to go at times. Much of the area turns into one large flood plain during winter rains and there are stream channels everywhere. It can be hard to tell which way the stream flows.

It had been many years since I last hiked around lower Mono Creek. I wasn’t sure if I was heading in the right direction or if I’d be able to follow my tracks back out. Worse case, I’d just pick a direction and find my way to one side of the riparian thicket and climb the nearest hill to get a look around. But that takes a lot of effort and eats up valuable daylight time.

I reached into my pack and grabbed my GPS. Due to the tree cover I wasn’t sure if it’d work, but it did. As it turned out I didn’t need it after all and I soon broke out of the woods and into the gravely dry bed of Mono Creek and was at Mono Camp a short time later. Although the trail through the cottonwood forest is pretty clearly flagged at the moment, I missed at least one turn on the way in and I can see how people can get lost. Although I’d rather spend a cold miserable night lost in the woods and have another try at finding my way out next morning, rather than call for help. I’d die sooner from embarrassment than exposure.

A panorama view of Mono Debris Dam or what was once a fairly good water slide.

I haven’t been around long, but I’ve seen a few things change. There was once a pretty good little wave down yonder south of Rincon at Oil Piers until the wharf was removed; Haskell’s meadow before the Bacara; there were more lemon fields around and fewer houses; the stop lights crossing US-101 before the overpasses. Stuff like that.

Then there came the end of Mono as a swimming hole and water slide. No more sliding down the face of the dam, hitting the launch ramp-like lip at the bottom and getting tossed through the air and into the big pool of water below. 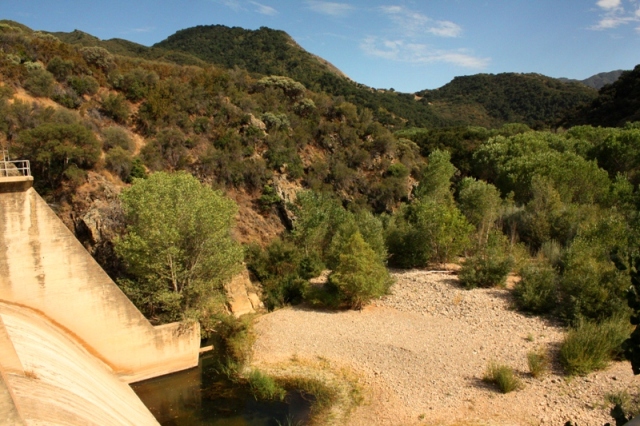 I stand on the catwalk on top of the old cement barrier gazing down upon 20 to 30 feet of dry cobblestones piled up where I used to swim. The bedrock shoreline below the dam, where we used to lounge around baking like lizards in the sun, is completely buried. A large pipe sticking out of the dam that I used to walk under to jump into the water is now only several inches above the waterline. The launch ramp-like bottom of the dam that spit us into the air over the swimming hole is several feet underwater; it used to be about three feet above the waterline.

Sometimes the creek wasn’t quite flowing over the dam enough to slide down, but by piling up rocks to pool water at the bottom in front of the launch ramps it was possible. Somebody would push waves of water over the top of the dam to add to whatever was already trickling naturally and somebody else would slide. Over the years I’d seen people go down in inflatable boats and sitting on lawn chairs on boogie boards and other entertaining ways usually inspired by an absence of sobriety. And for an encore, warm weather and summertime full moons lit up the dam for night sliding.

The creek above the dam had nearly completely silted in by the time I first remember being brought up to Mono as a boy long before the campground was closed to vehicles. The pool below the dam was always in a slow process of being filled in, but it was doomed for good in 2007 once the Zaca Fire scorched nearly 100% of the Dick Smith Wilderness that is the watershed upstream. Over the next several years an unimaginable volume of sediment was swept off the mountains and flushed down Indian and Mono Creek and over the dam toward Gibraltar Reservoir. Only memories and old snapshots tucked away in personal collections remain to record how things once were.

A view from the catwalk looking down on the bottom of the dam, which is just barely visible underwater, where it isn’t already buried by rocks and mud. The horizontal lines drawn in red show the outline of the lip of the ramp that formed the bottom edge of the dam, which we used to slide off of. The lip was once about three feet above the pool of water below. The rectangular-shaped channel formed by the vertical red lines is one of the drainage ports that water would flow through after coming down the face of the dam.

Looking up Mono Creek from atop Mono Debris Dam. 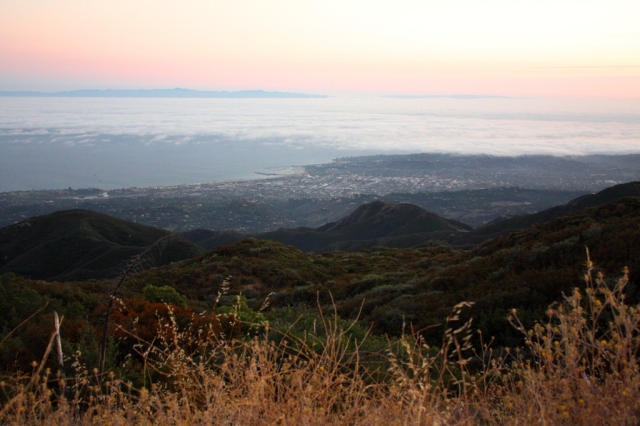 The parting shot looking over the backcountry with the San Rafael Mountains making up the mountain line silhouette in the distance and Little Pine Mountain faintly visible in front.