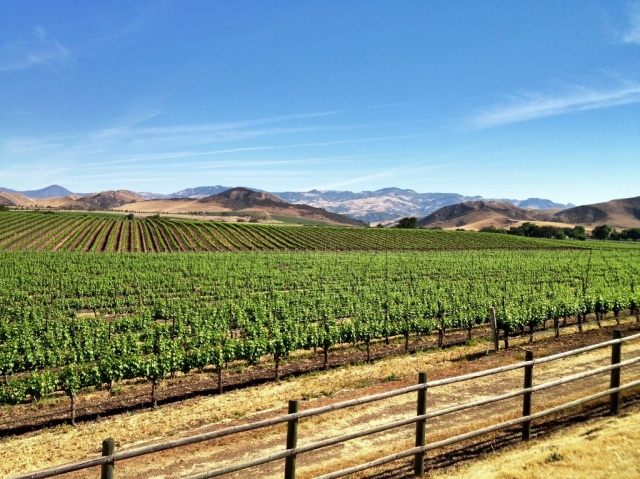 Santa Ynez Valley viticulture as seen on drive to trailhead.

It’s an ordinary summer day. It’s not one of those media hyped heat wave events, but it’s supposed to be hot out. Such forecasts don’t really apply to the backcountry, though, and I expect it to be hotter than called for.

County-wide to date Santa Barbara has received less than half its normal rainfall amount for this season. And a little more than half the normal amount of rain fell the previous season. Bradbury Dam at Lake Cachuma last spilled in 2011.

The San Rafael Wilderness is hot and dry. It’s withered, shriveled, and crunchy. And hordes of tiny flies are out in search of heads to ceaselessly buzz around and eyes, ears, noses and mouths to crawl into. These less than pleasant conditions deter most people, a fact confirmed by my arrival at a parking lot devoid of vehicles. 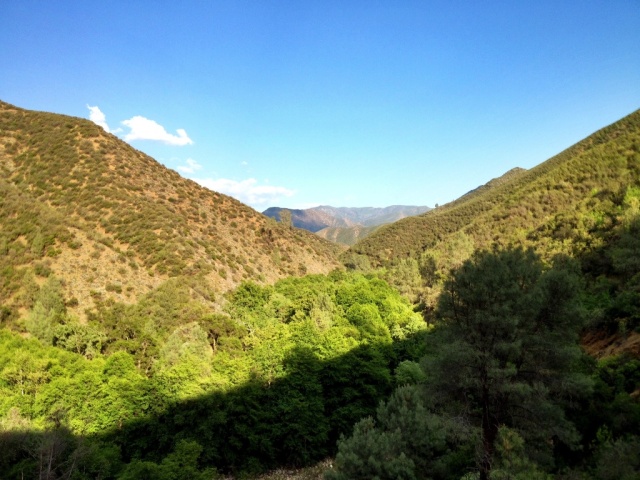 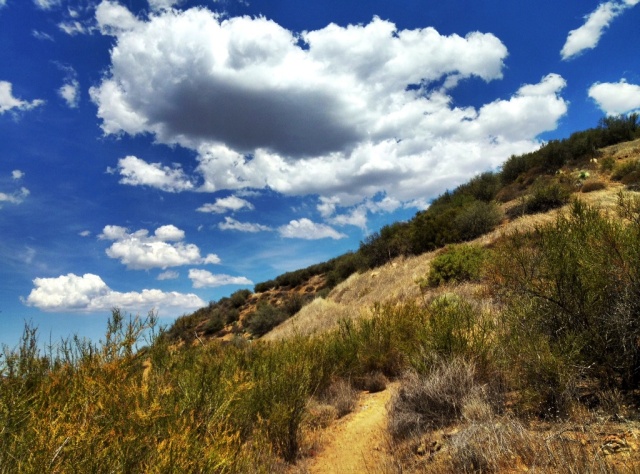 I plod along the trail with my head down and a steamy red face, step by heavy step up the gravely mountainside, glistening and dripping with sweat, my heart throbbing audibly in my head. The world bobs and weaves with the motion of my head as I stomp along, randomly glancing out here and there from under my hat brim. The only sounds are my heavy footsteps, the forceful rush of breath in and out of my nose and the rhythmic dull thump of my heart.

It’s like I’m fighting against myself as I hike, because as I struggle along, sucking and puffing wind, legs laboriously scissoring back and forth, the world around me, the plants and rocks and everything else, it’s all still and silent. It’s not doing anything. It’s not for me or against me. It’s inanimate. Indifferent.

It’s always like that, of course, but on this exceptionally hot day the feeling seems particularly acute as I grind my way up the sweltering slope. I’m working myself toward dehydration, fatigue and heat stroke and all I’m doing is slowly walking up a dirt path. 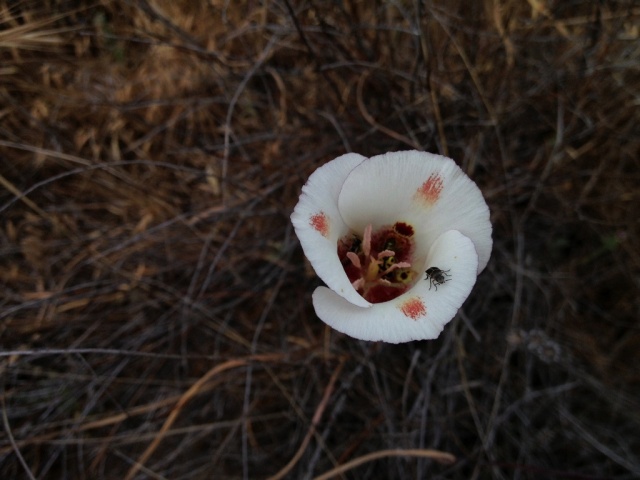 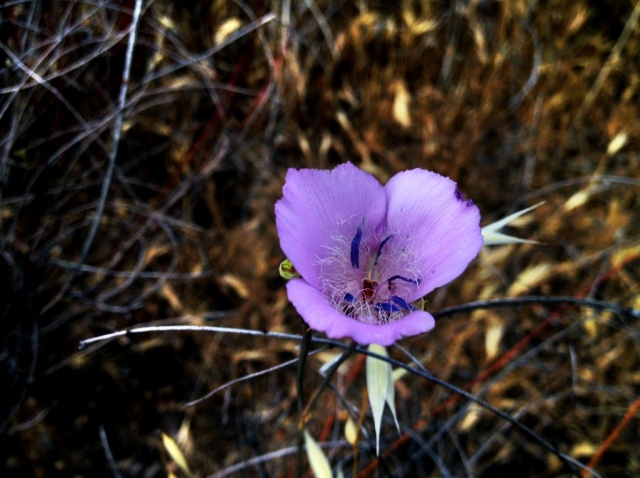 I slog up the mountainside through the crispy dry chaparral, caught between the life shriveling, merciless glare of the sun overhead and the rocky mountainside underfoot radiating its solar energy back at me.

I come upon a scant patch of shade under an overhang of brush. The shadow falls over a small trailside slope of bare soil. I collapse onto the dirt, scrunching myself up against the shadowy foot of the chaparral and trying to escape the sun’s deadly wrath.

Like a victim cowering from an aggressor, I curl up in the shadow. I’m able to get most of my body out of the sun except my lower legs, which I try to shade by placing my hat on a raised knee like an umbrella. After ten minutes or so I glance at the thermometer on my backpack in the shade: 100 degrees. 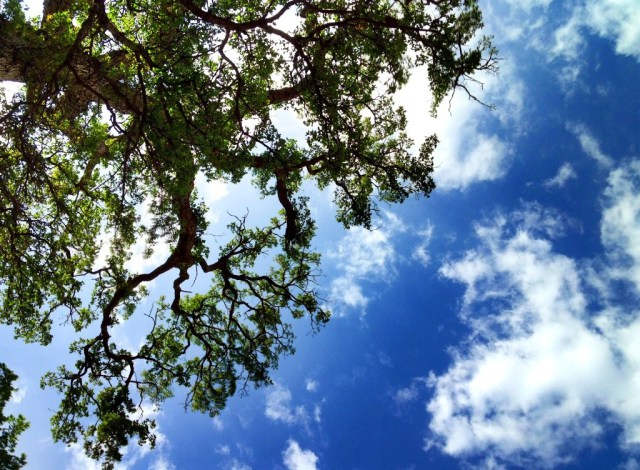 I march over the crest of a chaparral covered hill and down into a lightly wooded grassy glen, eagerly looking forward to another rest in the shade. The odd patch of sloping grass on the brushy mountainside is sparsely dotted with oak trees casting big shadows.

I plop down under a large tree to cool down, hydrate, refuel and allow my fluttering heart to slow down. I’ve only covered a couple of miles, but the short hike thus far has inflicted a disproportionately large degree of strain on my body. I feel beat. 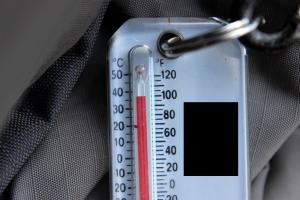 The forest seems empty and lifeless in the heat and absence of water. The fleeting splash of vibrant green, lent briefly to the drab hills seasonally by the flush of grasses and other small annual plants, has long since withered and faded to neutral earth tones. It will be months before it rains again.

Peering over the parched landscape shimmering in the afternoon heat it does not appear as if life here is thriving. It’s hard to imagine that the plants and animals are doing much more than merely enduring. Of course, this view is based on my own experience. I can’t avoid projecting my own strain and struggle onto other lifeforms.

Compared to months earlier, or years as the case may be, when the creeks and arroyos were flowing and filling the canyons with the sound of rushing water, now there is a heavy silence, a notable sound of absence. The land feels less dynamic and less alive without the roar and trickle of running water. 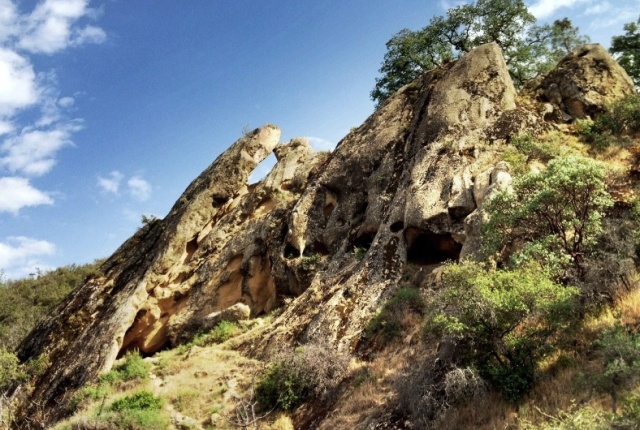 Leaving the grassy hollow behind, I wade through the sparse brush, over the sandy soil and rocks and through wildfire scorched skeletons of chaparral and a few little trees. I’m traversing an uneven expanse cut by several deep, but narrow arroyos.

One of these small drainage chutes, while dry like all the rest, drops over a wall of bedrock and into a lush, muddy pocket surrounded on either side by walls of sandstone. It’s a rare seep. The water oozes out of cracks in the bedrock at the base of what would be a small cascade during wet weather, but now it’s a mire unsuitable for drinking or anything else unless in desperate need.

Nonetheless, I take note. I always find springs and seeps in this semi-arid, usually dry landscape interesting and worthy of attention. Time spent in this forest is too often dominated by the need of water so it always catches my eye when I come across it.

Such a seep as this reminds me of something in a western novel. A lone remote water hole hidden from sight in a rough land. It makes me think of the different animals it may attract during day and night, the peoples of the past, Indians, pioneers and early explorers, that may have relied on it. 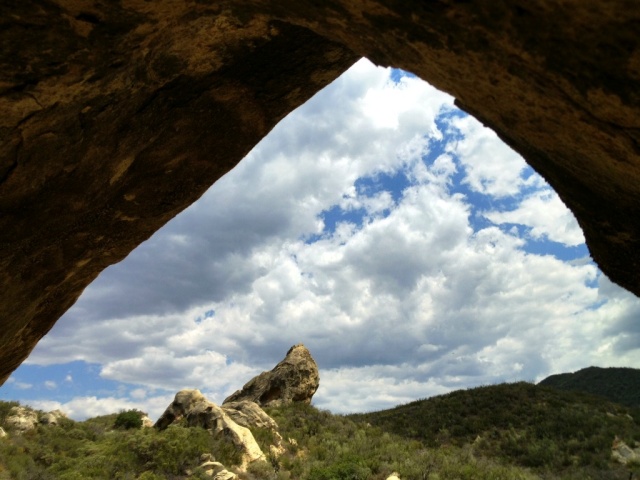 I find a cave and crawl inside seeking refuge. Laying on my back on the cool sandstone I gaze out over the landscape surveying the desolate, inhospitable backcountry realm. My view of this day is entirely shaped by the sweltering temperature and dryness of the land. It’s a different perspective than when I’ve come here on other milder days.

It’s brutal out there. It can be miserable, painful and deadly. This isn’t a pleasant leisurely stroll. This is a punishing battle. It’s a land where I don’t seem to belong but for fleeting visits. Wilderness, as oh-fficially defined, is a land “where man himself is a visitor who does not remain.” Temporary visitation isn’t a choice, though. It’s an undefiable reality.

When facing nature with only what’s in a backpack, one may hold out for some time, even thrive for a period, but eventually she whittles you down and wears you out, and sends you fleeing from her indefatigable elements like a refugee seeking safe harbor and nourishment.

The 100 degree heat has left me tired, sticky lipped and with a thirst that my bottle of warm water cannot quench. Lying in the cave lost in meandering thought, I feel the heavy creep of weariness settling over me and my eye lids growing heavy.

I succumb. My eyelids fall shut.