“I got paid $50 a month for teaching and paid $14 for room and board, and that was a shared bed at that, with at least one or two children.”

In the Santa Barbara backcountry, at the confluence of Manzana Creek and the Wild and Scenic Sisquoc River and accessible to the general public only by a long hike, there stands a schoolhouse established by nineteenth century pioneers. The following text is taken verbatim from a posterboard display located inside the old schoolhouse.

In the late 1800s, homesteaders from Kansas settled in the Sisquoc River Valley and struggled to farm the thin-soiled land along Manzana Creek and the Sisquoc River. By 1890, almost 200 people lived on 20 different homesteads in the valley. In March 1894, these settlers asked the Santa Barbara County Board of Supervisors to establish a local schoolhouse. Classes began on the 4th of July of that year. Classes were held in the summer months when the river was low enough for the children to cross safely. The schoolhouse also functioned as a community center for social gatherings.

Teachers lived with local residents or rode on horseback or by wagon to the schoolhouse. Seven different instructors taught during the school’s short existence. Eventually, the weathered turned against the settlers and dry years made both farming and cattle unprofitable. Settlers moved away. In 1902 with only one student enrolled the school closed.

The schoolhouse was abandoned for several years, until two fur trappers from Lompoc moved in and set traplines along Manzana Creek in 1927. They used the building as a large drying rack for their pelts. One of these men trapped animals in the Sisquoc-Manzana area for about sixteen years until his death on Figueroa Mountain. Following World War II, the structure was used by campers, hikers and hunters. Ranchers even stored hay and salt inside the building for their cattle.

In 1966, the County Landmark Advisory Committee designated the old schoolhouse as the second Historic Landmark in Santa Barbara County. In 1988 a full fledged restoration project was initiated, a cooperative effort between the Los Padres Interpretative Association and the U.S. Forest Service. Such projects point to the need for protecting our cultural resources, while preserving them for the future enjoyment of others. Please help in this effort. 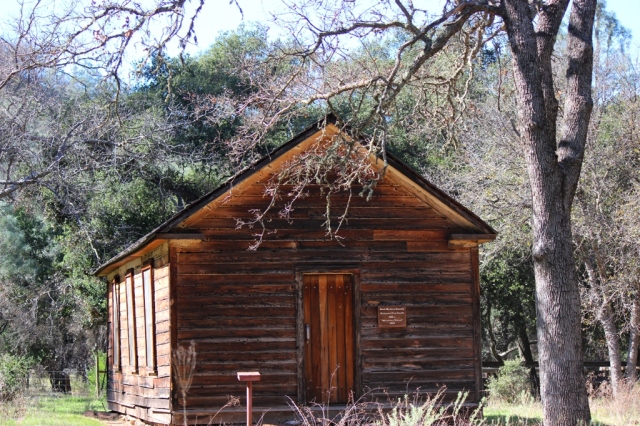 A detail of the pine planks making up the outside walls of the schoolhouse, which are riddled with holes from wood peckers.

The inside of the schoolhouse is covered in one hundred years worth of names and dates that have been written on and carved into the walls. While the older dates I find intriguing and view with pleasure as a piece of history, the newer ones make me cringe and even give rise to anger. It’s a contradiction of sorts I have long pondered and have yet to resolve.

The old black board inside the school was long ago turned into a free-for-all graffiti panel. R.L. Cooper carved his name and the date into the soft wood back in 1911 and one hundred years later, long after the building was officially designated a Historical Landmark, lamebrain Lars Peterson added his mark.