Looking at Don Victor Valley, circled in red, from the junction of Potrero Seco Road and Loma Pelona-Victor Road.

“. . .here, where there are still the silences and the loneliness of the earth before man, . . .” -Dick Smith

With a high pressure system ensuring near perfect clear winter conditions—cloudless blue skies, mild temps with warmth in the sun and coolness in the shade—I set off for Pine Canyon in the Dick Smith Wilderness for a two night stay.

Just after dawn I left Highway 33 at Pine Mountain Summit and marched down Potrero Seco Road. I rounded a few bends before the sun cast its first golden-orange beams upon the land, the earthy aroma of which was invigorating in the cool, early morning air. Fresh afoot the day was ripe with promise.

Walking fire road is usually not as enjoyable as hiking canyon trail, but at least Potrero Seco Road and Loma Pelona-Victor Road provide remarkable views of the backcountry. All the way down the ridge running LPVR to Don Victor Valley Madulce Peak looms before you. Unfortunately, the entire region resembles a wasteland in many ways rather than a forest, as it continues its long recovery from the Zaca Fire.

A seasonal creek running by the oaks in Don Victor Valley.

I reached the valley floor and crossed Mono Creek, which although narrow and small was flowing at a good clip through the tunnel of yellow-tinged willows that marks its course through the valley. Animals tracks, mostly coyote and deer, seemed to cover every patch of open sand or dirt.

On my way upstream along the overgrown fire road, I stopped to take a look at some rocks embedded in the cliff above Mono Creek. Just then I heard a squeak and turned to see a hawk soaring toward me. I missed seeing the hawk snatch up its mid-afternoon meal by mere seconds, but it circled directly overhead twice, obviously curious about my presence, and the way I must have stuck out in the desolate valley. And rather than some type of rodent damned if it didn’t have a bird clenched in its talons.

I plodded up the valley along the creek passing where I supposed Don Victor Camp to be, which apparently doesn’t exist other than in an historical or cartographical sense. [EDIT 12-17-2011: “There is a campsite at Don Victor. It’s nothing to write home about but there is a site with a shovel and fire grate on the N side of the creek and some old ice can stoves hiding under the grass on the S side.” —Bryan Conant] Somebody had been down in the valley in a Jeep recently and I came across some old foot impressions up Pine Canyon, but other than that, it looked like very few people ever venture into the area. The trails and road were overgrown and I saw no sign of any type of formal USFS camps anywhere.

Pine Canyon trail is matted over with the thatch of several seasons worth of dead grass and the fresh green sprouts of the current crop. It’s overgrown with some brush and trees and buried beneath dead fall in other areas. Despite the overgrowth, however, the trail is still plainly visible in many sections.

I attempted to find its beginning at the mouth of the canyon, but couldn’t locate it and so just barged into the regrowth. I was able to pick my way through the thinned out brush fairly easily, and eventually found myself on and off the trail all the way to Pine Canyon Flats or what used to be Pine Canyon Camp. 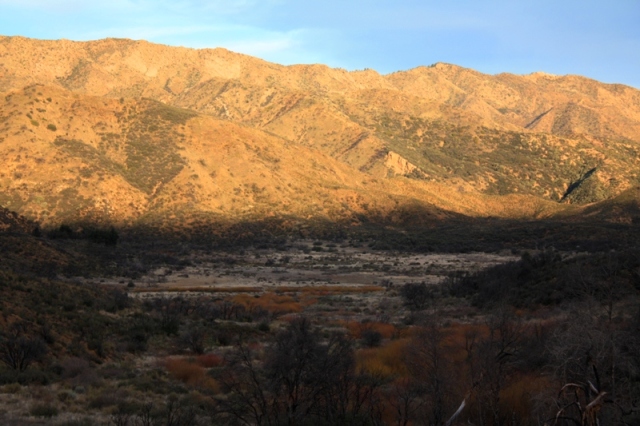 A late afternoon view of Don Victor Valley seen from Pine Canyon. The oak trees in the previous photo can be seen here on the left in the shadow just beneath where the sun is striking the mountain.

A morning view looking at the mouth of Pine Canyon from Don Victor Valley.

At the mouth of Pine Canyon, there is a patch of huge tufted grass with some clumps growing three feet tall or more. They are an interesting feature of the landscape, as far as grass goes.

Pine Canyon Camp at the flats is also nonexistent. Maybe there are some old stoves or rusty iron remnants around somewhere buried or covered by grass, but it looked like it had never been used, except for the faint grass covered depression of a seldom traveled trail heading for the swimming holes of the Jackson Five upstream.

Pine Canyon Flats is set amidst a small oak grove growing on a bar along the creek and provides plenty of places to camp for those who appreciate such informal arrangements, as I do. There are numerous nooks and crannies under the oaks where a fella can set up a sweet little campsite.

Map from 1988 showing the location of Pine Canyon Camp. (Click to enlarge.)

The first evening a warm wind kicked up after midnight and I didn’t sleep well with the constant rush of it through the oaks. I slept late next morning to make up for it and laid around reading Louis L’Amour and sippin’ coffee well into the forenoon. The wind had died and the creek once more filled the canyon with the sound of flowing water. And nobody else was around for miles. Pura vida!

I hiked up to the first couple of pools of the Jackson Five in early afternoon and kicked around for awhile. The swimming holes had far less gravel and silt in them than I was expecting, and were plenty deep enough to get wet in and swim around a bit. I came across a well gnawed on piece of antler and then got distracted climbing up and exploring a rocky slope above the creek. I didn’t make it up the creek very far.

On the way back I jumped into one of the pools to cool off and freshen up. Well, it nearly gave me a heart attack. It was painfully cold and forced me into a fit of yelling as I scrambled to get out. I don’t have much tolerance for cold water. At least not without waves. The water was refreshing for a split second before its bone penetrating steely cold set in, and it felt as if I was being eaten alive from the inside out. I moseyed back down to camp at dusk later that second day and hunkered down for the night. I was up at first light next morning, broke camp and started home on a leisurely pace making it back to Highway 33 at sunset.

It’s still pretty ugly back there in this area of the Dick Smith and Pine Canyon because of the fire, but at least the trees now have enough regrowth to provide some shelter, shade and ambiance. The oak groves, the year round flow of water off Madulce Peak above the flats, the pools of the Jackson Five and the area’s desolate untraveled nature puts the canyon on my short list of prime backcountry destinations. It looks pretty bleak on the hike in even up through Don Victor Valley, but it has its own appeal and once you get up in Pine Canyon it’s a different realm altogether. 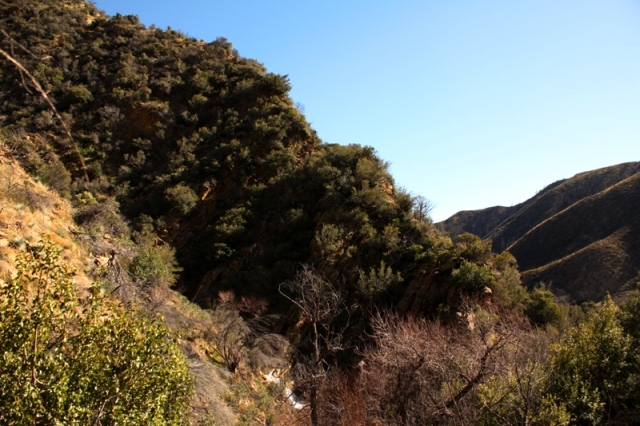 The dog leg in the creek is where the first pool is located. 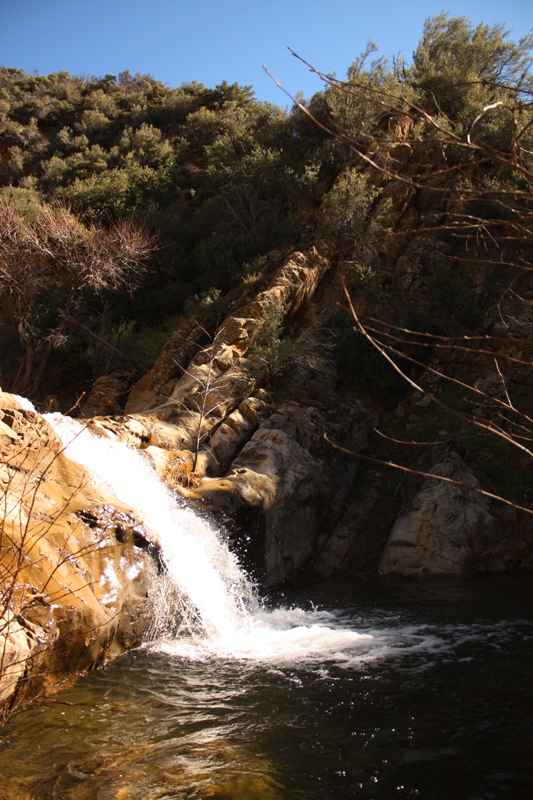