I was hopeful that, following the holiday weekend, the crowds would have flushed through and I might be able to claim one of the better pools for a swim. Typically, on holiday weekends, I hunker down at home and wait for the maelstrom to blow over. It was an incredible day was Tuesday. Cloudless and hot in the sun. So, of course, there were several cars in the lot when I pulled up. I expected that. That wasn’t the surprise.

I passed a guy on the road who had nothing in tow but his shirt and pants and shoes. Both of us afforded only the slightest gesture of recognition to each other. He looked like he was headed to the next Dead show.

Further up the trail another bloke and his gal were sprawled out on some rocks baking in the sun beside one of Matilija’s many emerald gems. Good call. I thought. That should be me with my lady.

Further up the canyon, I walked up on two more people as the trail passes alongside one of the smaller, lower pools. I had heard somebody as I was walking, but I didn’t register what I had heard at the time or where exactly the people were. I just kept walking toward the pool looking to cool off.

I didn’t really care where the people where so I wasn’t paying much attention. I expected to possibly see several groups judging by the cars at the trailhead so hearing voices wasn’t a surprise. Apparently some other people added up things a little differently and didn’t expect to see anybody at all. It wasn’t really a voice that I heard.

I walked up over a hill to the sight of a moaning woman mounted up and grinding away on a dude laying on his back, both of them butt naked on the rocks. Whoah! She rolled off as I spun around in mid-stride.

I kept walking as if they weren’t even there. I passed one other couple dozing creekside by a pool before making it to the big lower fall. Despite the traffic on the way up, I had the pool to myself and just in time to jump in and get wet and then dry off before the sun fell behind the ridgeline. 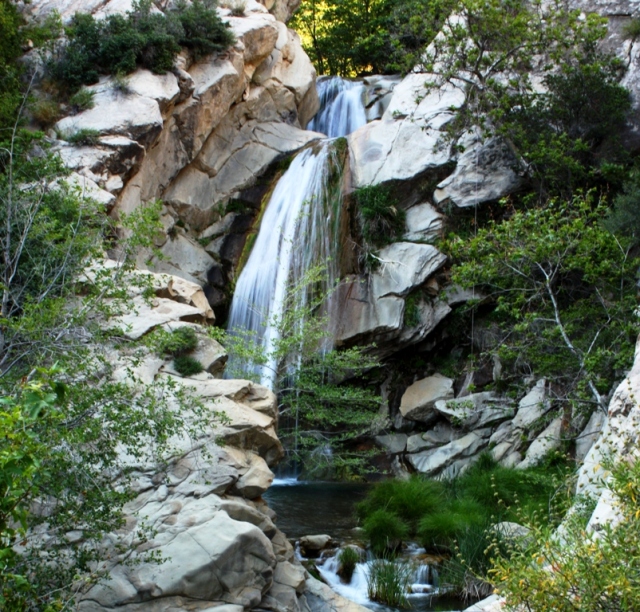 This entry was posted in Ventura and tagged Matilija, Tales, Ventura County, wildflowers. Bookmark the permalink.