The Bandit of Ballarat

“For 11 months, the Bandit led state and federal officers on a 1500-mile chase through some of the most rugged and inhospitable terrain in America. They had pursued him with helicopters, planes, dogs, trackers, and entire task forces, on horseback, by car and on foot; he had escaped them at every turn by demonstrating incredible feats of physical endurance and wilderness ingenuity. As tales of his exploits mounted, he became a folk hero, an outlaw trickster in the tradition of the Old West.”

-Jason Kersten, The Bandit of Ballarat 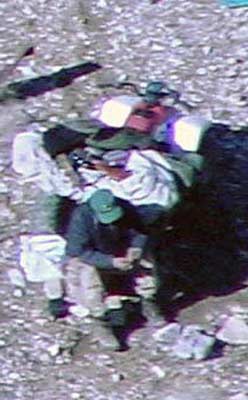 He disappeared, melting into the desert wilderness on foot when a 30 man posse raided his camp with trucks, ATVs and a Black Hawk helicopter carrying a SWAT team.

In another instance, authorities discovered the Bandit’s camp near the base of a 9000-foot mountain. They launched an assault at dawn with a K-9 unit and a SWAT team. They took to a foot chase up the slope following his tracks and came within 50 feet of him, but the Bandit smoked ’em.

He sprinted five miles up and over the mountain and across the valley beyond leaving bewildered law enforcement agents in the dust.

“He never stopped once,” recalled one officer. “We followed him track to track, and he never put two feet together. He never stopped to rest, never sat down, nothing.” Not bad at 50 years old.

Two months later, he once again escaped pursuers by trekking 60 miles through the desolate snow-covered hills of Nevada.

And that’s only part of the remarkable story surrounding the so-called “notorious U.S. fugitive”, the Bandit of Ballarat, George Robert Johnston. There are numerous points to focus on, but I mention it here out of interest in the “physical endurance and wilderness ingenuity” demonstrated by Johnston.

The story was originally published in Men’s Journal (May, 2007). It can be read in full at Jason Kersten’s website or here in PDF format: Bandit of Ballarat.

This entry was posted in Tales and tagged Ballarat, Bandit, Desert. Bookmark the permalink.

20 Responses to The Bandit of Ballarat