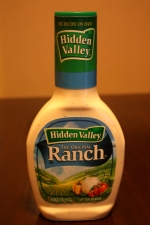 “Enough! I grow weary of your sexually suggestive dancing. Bring me my ranch dressing hose!”

It’s a nutritionist’s nightmare, a glutton’s godsend. It’s the king of salad dressings and a cornerstone of the condiment world. Ranch dressing is a key component behind a slew of popular exercises in cardiotoxic consumption, such as sopping hot cheesy slices of pizza through chilled puddles of it. Plunging spicy Buffalo wings and golden fried onion rings into pools of it, like a fat guy doing a cannonball into a Seven Falls swimming hole. Baboosh! If it wasn’t a favorite food it’d make a popular pastime.

Henson promptly renamed his slice of paradise “Hidden Valley.” He began serving guests at Hidden Valley Ranch his own signature salad dressing using a recipe he had put together while working in Alaska.

Recalls Audrey Ovington, the flamboyant and colorful owner of the Cold Spring Tavern, a fabulously funky eatery near Hidden Valley: “The first I knew of the dressing was one day when he [Henson] came in the tavern’s family entrance and headed straight for the kitchen and said, `Gotta mix something up.’ He came out with a little white bowl. Handing me a spoon, he said, `Taste it. What do you think?’ It took off in my mouth like a freight train.

“`That,’ he said, smiling, `is Hidden Valley Ranch Dressing.'”

Immediately Ovington put it on the menu, and that’s how it all began.

And from there, Steve Henson’s creamy herbed concoction went from a little known backwoods treat whipped up on a Santa Barbara County ranch, to a national bestselling dressing and a household name.