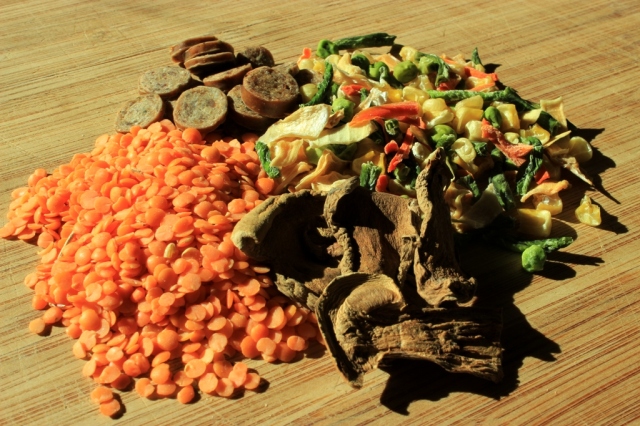 This here’s the backcountry beans and sausage mix suitable for making soup or stew. (Lentils with Bavarian Bratwurst, Porcini Mushrooms and Mixed Vegetables)

“An army marches on its stomach.”

Trail food serves a dual purpose for me when backpacking. Its primary value is utilitarian; to provide nourishment and fuel for hiking. Its secondary value is psychological; to provide an appetizing, delicious meal to look forward to after a long hard day of strenuous physical activity. Good food boosts morale while filling the belly.

To this end I prefer to prepare my own food at home. In doing so I am able to create meals that are healthier, tastier, less expensive and less bulky compared to the typical store-bought highly processed, sodium overloaded prepackaged meal pouches. I also don’t care to poor boiling water into a plastic pouch, a material known to leach toxic chemicals into food under such circumstances, and marinate my food in a tea of potentially poisonous substances.

The two meal mixes shown in this post I prepared at home by dehydrating the ingredients in the oven, apart from the dried porcini mushrooms which were store bought. When out on the trail, I add boiling water mixed with a quality broth or bullion, which is available in stores in small foil packets, and let the mix sit while I set up camp. When I’m ready to eat, I add more water as needed to make soup or leave the mix thick with less water for a stew consistency. I fire up the stove and boil the mix for a few more minutes to fully rehydrate the ingredients and get it hot and then chow down. It’s good stuff, Maynard, I’m tellin’ ya.

In choosing the ingredients I incorporate foods that don’t just taste good but are nutritious, too, and which provide high fiber and protein for a long lasting energy boost. I also add a complimentary mix of herbs and spices depending on the particular meal. By preparing meals at home I satisfy nutritional necessity while also pleasing the palate, which is something freeze-dried, store-bought prepackaged meals utterly fail to provide in my opinion. It requires a small amount of preparation, but adds a lot to overnight trips and makes them more enjoyable.