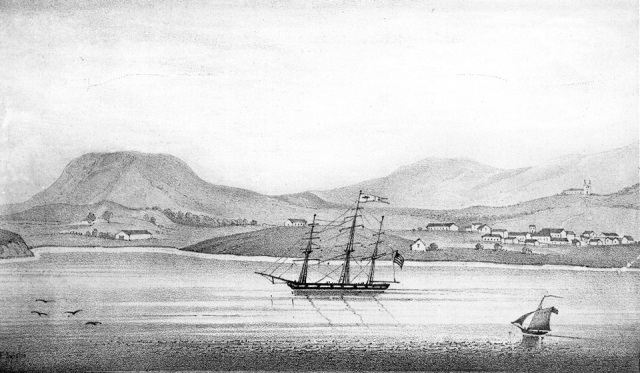 A drawing of Santa Barbara in 1839 from Alfred Robinson's book, "Life in California."

In the following passage taken from his acclaimed travel narrative, Two Years Before the Mast (1841), Richard Henry Dana, Jr. describes landing on the beach at Santa Barbara on January 14, 1835 after a five month voyage from Boston.

Dana was a Harvard scholar and a lawyer that shipped off as a common seaman on the brig Pilgrim, whereupon he worked along the California coast for two years loading cattle hides aboard the ship for transport to market.

He is commonly remembered today as the author of the aforementioned memoir and the namesake of Dana Point, California. In the excerpt below he relates an early view of Santa Barbara and its surroundings. The text has been edited to include Santa Barbara specific references and the lengthy paragraphs broken up.

“We came to anchor in the spacious bay of Santa Barbara, after a voyage of one hundred and fifty days from Boston. . . . The captain’s orders from home were to put in at Santa Barbara, the central port of the coast, and wait there for the agent, who transacts all the business for the firm to which our vessel belonged.

The bay, or, as it was commonly called, the canal of Santa Barbara, is very large, being formed by the main land on one side (between Point Conception on the north and Point Santa Buenaventura on the south), which here bends in like a crescent, and by three large islands opposite to it and at the distance of some twenty miles.

These points are just sufficient to give it the name of a bay, while at the same time it is so large and so much exposed to the southeast and northwest winds, that it is little better than an open roadstead; and the whole swell of the Pacific Ocean rolls in here before a southeaster, and breaks with so heavy a surf in the shallow waters, that it is highly dangerous to lie near in to the shore during the southeaster season, that is, between the months of November and April. …

.It was a beautiful day, and so warm that we wore straw hats, duck trousers, and all the summer gear. As this was midwinter, it spoke well for the climate; and we afterwards found that the thermometer never fell to the freezing point throughout the winter, and that there was very little difference between the seasons, except that during a long period of rainy and southeasterly weather, thick clothes were not uncomfortable.

The large bay lay about us, nearly smooth, as there was hardly a breath of wind stirring, though the boat’s crew who went ashore told us that the long groundswell broke into a heavy surf on the beach. There was only one vessel in the port—a long, sharp brig of about three hundred tons, with raking masts, and very square yards, and English colors at her peak. … She was a fast sailer, as we frequently afterwards saw, and had a crew of Sandwich-Islanders on board.

Beside the vessel, there was no object to break the surface of the bay. Two points ran out as the horns of the crescent, one of which– the one to the westward– was low and sandy, and is that to which vessels are obliged to give a wide berth when running out for a southeaster; the other is high, bold, and well wooded, and has a mission upon it, called Santa Buenaventura, from which the point is named.

In the middle of this crescent, directly opposite the anchoring ground, lie the mission and town of Santa Barbara, on a low plain, but little above the level of the sea, covered with grass, though entirely without trees, and surrounded on three sides by an amphitheater of mountains, which slant off to the distance of fifteen or twenty miles.

The mission stands a little back of the town, and is a large building, or rather a collection of buildings, in the center of which is a high tower, with a belfry of five bells. The whole, being plastered, makes quite a show at a distance, and is the mark by which vessels come to anchor.

The town lies a little nearer to the beach — about half a mile from it — and is composed of one-story houses built of sun-baked clay, or adobe, some of them whitewashed, with red tiles on the roof. I should judge that there was about a hundred of them; and in the midst of them stands the Presidio, or fort, built of the same materials, and apparently but little stronger.

The town is finely situated, with a bay in front, and an amphitheater of hills behind. The only thing which diminishes its beauty is, that the hills have no large trees upon them, they having been all burnt by a great fire which swept them off about a dozen years ago, and they had not yet grown again. The fire was described to me by an inhabitant, as having been a very terrible and magnificent sight. The air of the whole valley was so heated that the people were obliged to leave the town and take up their quarters for several days upon the beach.

Just before sundown, the mate ordered a boat’s crew ashore, and I went as one of the number. We passed under the stern of the English brig, and had a long pull ashore. I shall never forget the impression which our first landing on the beach of California made upon me. The sun had just gone down; it was getting dusky; the damp night wind was beginning to blow, and the heavy swell of the Pacific was setting in, and breaking in loud and high ‘combers’ on the beach. …

We put our oars in the boat, and, leaving one to watch it, walked about the beach to see what we could of the place. The beach is nearly a mile in length between the two points, and of smooth sand. We had taken the only good landing-place, which is in the middle, it being more stony toward the ends. It is about twenty yards in width from high-water mark to a slight bank at which the soil begins, and so hard that it is a favorite place for running horses.

It was growing dark, so that we could just distinguish the dim outlines of the two vessels in the offing; and the great seas were rolling in regular lines, growing larger and larger as they approached the shore, and hanging over the beach upon which they were to break, when their tops would curl over and turn white with foam, and, being at one extreme of the line, break rapidly to the other, as a child’s long card house falls when a card is knocked down at one end.” 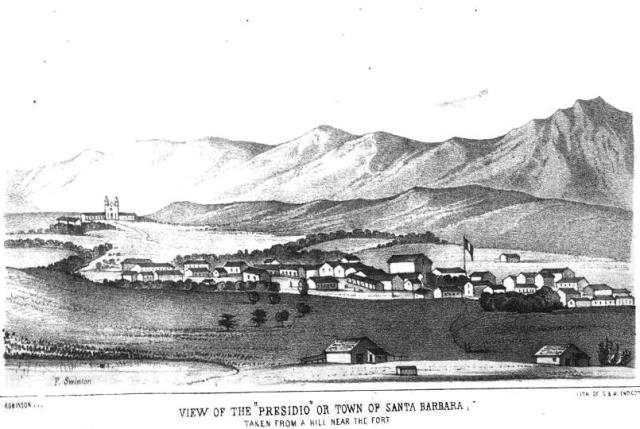 Another illustration of Santa Barbara from Robinson's "Life in California."