Wellhouse Falls and the Waterfalls of Lewis Canyon 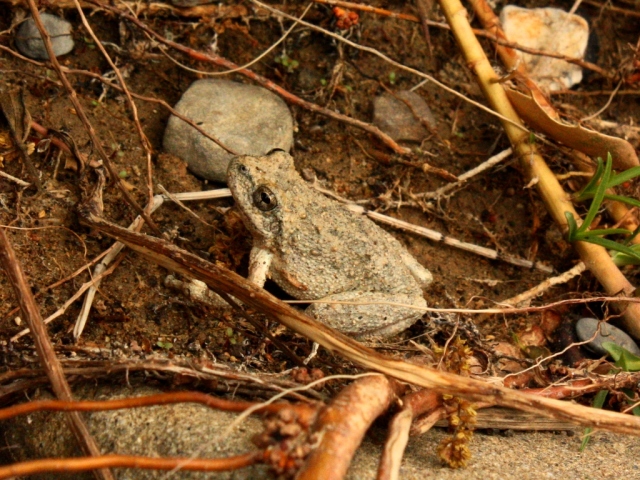 A few months ago I walked up Snyder Trail from Paradise Road in search of a path to the waterfall in Lewis Canyon, but to no avail. Upon reaching the transmission tower, where the power lines cross over the trail, and having found no sign of a pathway, I turned around.

On the way back down Snyder Trail, I came to one of the many bends in the singletrack and noticed that there was actually an old roadcut leading east down into Lewis Canyon, which I had missed on the way up. Having never hiked the trail, I hadn’t noticed the road before, as I had always been flying by on my mountain bike at top speed in front of or behind several other friends racing downhill.

The route looked promising and I eagerly started following it. There was evidence of its use by others, but it was quickly consumed in old growth chaparral and apparent that it was obviously not routinely traveled. I pressed on nonetheless thinking it was, indeed, an old route to the falls, though all evidence of use quickly disappeared altogether. I believe it is the old road cut made by George Owen Knapp, which led to the bathhouse he purportedly built in the canyon somewhere near the waterfall.

I figured the road had to have led to the falls at some point and that it would just require some bushwhacking. I continued on wrangling my way under, over and through the brush but it soon became apparent that reaching the creek bed would require far more effort than I cared to exert. At that point I called it off entirely and that was that for the day.

One of the smaller cascades in the lower part of Lewis Canyon.

Same cascade as shown above.

This last Tuesday I made another effort and ventured up Lewis Canyon creek from the bottom, where it crosses Paradise Road. The lower reaches of the creek were bone dry, but I soon heard a faint trickle of water. I figured that in August, even with this season’s record rainfall, any waterfall wouldn’t be flowing with much force.

The small crick is relatively easy to follow and open enough to pass through without too much effort, but the usual sort required when rock hopping and pushing aside branches here and there in a tight drainage.

I passed over several modest waterfalls before coming to the main attraction. Twice I had to crawl up the steep banks and out of the creek bed in order to get around the falls. There are two large falls, one right after the other, and the worse detour was in getting around the lower fall to reach the foot of the main fall. It took more effort than I cared for and I ended up on my hands and knees in several places, as I pushed my way through the dense brush.

The next fall on the way up the canyon.

After taking a looksee at the main fall for a bit, I crawled up through the slough of the creek bank and around the top of it, and then followed the drainage up the canyon for about a hundred yards.

The water disappeared underground just after the main fall and the riparian canopy that shrouds the lower canyon in dense shade soon thinned and the temperature rose dramatically. Though the hiking was easier, in that the creek turned into bare boulders and sheets of sandstone without all the vines and trees found lower down, I turned around thinking there likely wasn’t much more worth seeing up yonder.

On my hike back, traversing along the steep slope of the bank, about twenty to thirty yards above the creek, I stumbled across an old trail. The level cut of it was clearly visible against the slope of the hillside and there were a number of faded plastic ribbon-tape strips tied to branches here and there marking its course.

It quickly disappeared into the thick underbrush, though, and I decided not to push my way through trying to follow its course. I had no idea where it led and it was much hotter and more work once I was out of the canyon bottom. So I slid my way through the organic litter back into the creek and on down to my truck at Paradise Road.

The first of the two big falls showing just a thin stream of white water flowing over its face.

I saw this sort of plastic irrigation tubing in several places. Marijuana growers will set one end in the creek concealed by rocks and with a screen of some sort to filter out debris. The line is then run slowly up out of the creek down canyon, buried beneath dirt and leaves, and to the grow site, where it waters the plants through the natural force of gravity or fills reservoirs.

I came across two cement walls that ran across the creek in two different locations, which were apparently designed long ago to make use of the water flow in some manner. One of the cement barriers appeared to have some sort electrical infrastructure attached to it, as if it was made to harness the force of flowing water to generate power. Or, perhaps more likely, the degraded infrastructure was used to power a pump of some sort that drew water from the creek for use elsewhere.

This seems to be confirmed by the presence of the machine shown in the photo above, which I found in the creek and consists of a flywheel on one end and a small gear on the opposite side. Behind the rusty hunk of iron I saw a telephone pole-like timber that still had some braces attached to it for holding something. I was unable to locate any trace of the bathhouse built by George Owen Knapp near the big waterfall.

Knapp’s Castle Then and Now

Scent of the Sea On a Ventura County Creek

This entry was posted in Santa Barbara and tagged Frogs, George Owen Knapp. Bookmark the permalink.

7 Responses to Wellhouse Falls and the Waterfalls of Lewis Canyon