(c) Denver Public Library
The bridge over Gaviota Creek, Santa Barbara County circa 1900. The two black drawn lines correspond to landscape features still visible today and which are noted on modern day photos shown below. The black arrow on the right points to “Indian Chin.”

The following passage is excerpted from the journal of a man named J. D. Cox. It conveys the novelty of early automobile travel and the sense of adventure found in tooling around on primitive Santa Barbara County roads in vehicles that, apparently, were unreliable and often broke down or nearly rattled apart.

April 25th, 1906. Santa Barbara to Los Olivos. Had a fine run to Elwood. . .Had to stop at creek and fill up radiator. Pipe working loose on top of cylinders. From here to Gaviota road horrible. Crossed 45 little creeks and canyons, up one steep hill after another. Most discouraging. From Gaviota to Los Olivos, road good, and made good time. At Las Cruces passed two automobiles, one with broken spring. Ten miles further on at ford, passed an auto laid up by broken pump. After passing Santa Ynez Mission, engine misses. Took out battery and put in dry cells. Filled radiator with tumbler-from a horse trough. Arrived Los Olivos 7:15, making 61 miles in 5 1-4 hours. . .Found our rear lamp was gone. Found at Santa Maria.

April 26th, 1906. Los Olivos to San Luis Obispo. High wind blowing. Engine was running fine when we reached Los Olivos, but had no power this morning. Stopped every few minutes to tighten up water pipe, or fuss with wiring. . .As we drew near Santa Maria, could see air full of sand for miles. . .crossed the Santa Maria River in a perfect cloud of dust. Sand deep. . .more battery trouble. . .broke spring clear in two. . .

A present day view of Gaviota Pass looking down the southbound lane. The red lines note the same rock formations seen in the previous historic photo. 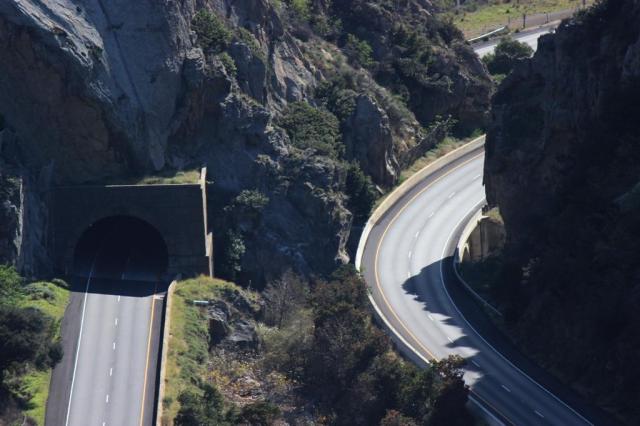 A mountainside view of Gaviota Pass, the southbound lane on the right as well as Indian Chin. A smooth and effortless drive today, the pass between the bedrock went from a foot trail, to a rocky dirt stagecoach road through what was then called Las Cruces Creek, which was then spanned by a steel bridge, then paved over in a cement single lane road for cars and finally a divided asphalt highway. 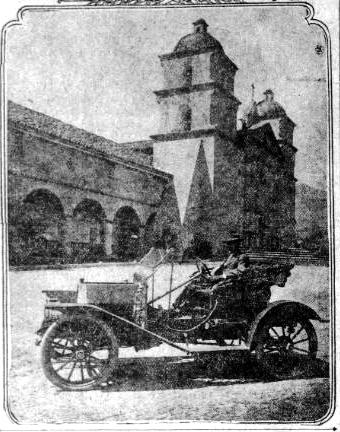 A photo of an early automobile parked in front of the Santa Barbara mission. (San Francisco Call, June 19, 1910)

The following excerpt comes from an article in the Los Angeles Herald published on June 14, 1908 and titled “Scenes on Trip of Great Smith to San Francisco.”

After Santa Barbara came the Gaviota first, with its hog-backs and then grade through the canyon.

Up and down the car wallowed over the successive ranges of rolling hills that extend down to the beach. Mile after mile the seesaw road ran along the edge of the hills until finally it ran back into a pretty canyon that became more charming the farther the car penetrated.

Under the oaks and sycamores a stop was made at noon, while a cold luncheon was disposed of. Then on over the summit the ride was continued on down the grade on the far side.

After Gaviota came several stretches of good roads that alternated with dusty patches full of treacherous chuck holes filled with dust that gave the car and its passengers an occasional jolt.

Historical photo of Gaviota Pass bridge is from the History Colorado, William Henry Jackson Collection and provided courtesy and copyright of the Denver Public Library Digital Collections. All rights reserved.

Owen H. O’Neill, Editor in Chief, History of Santa Barbara County, State of California: its people and its resources (1939).

5 Responses to Motoring on the Gaviota Coast (1906)