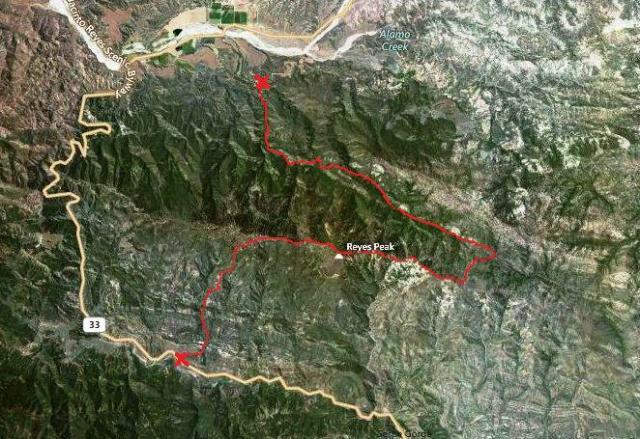 The trail outline of the route taken through the Los Padres National Forest and Sespe Wilderness.

“Everywhere is walking distance if you have the time.”

Said upon completion of the hike as we drove away from Camp Scheideck:

Stillman: “So what do you think of the southern Los Padres?” 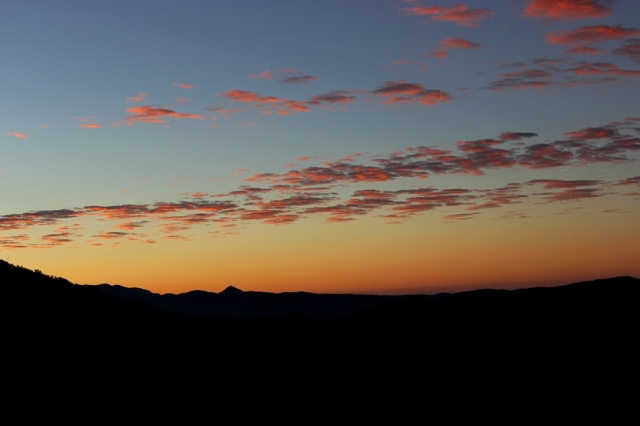 A sunrise view from the south slope of Pine Mountain. The conical point in silhouette is Chief Peak.

“He may be just a tramp, a guy that likes to roam about this great country without any special aim, just to thank the Lord for these beautiful mountains.”

I have never been one of religious faith. If there is a cathedral of sorts where I might in some small way be said to worship it would be the high seas or the high hills. Not that I kneel with hands clasped, but rather roam, wander and ponder. And so it is that whenever possible I flee the madness of modern society to free myself from the collective fray.

I rolled out of a warm cozy bed in the three o’clock hour and started taping up old unhealed blisters on my feet, while the coffee maker broke the silence with sputtering fits of steamy gurgles. By 5:50 am, David Stillman and I were walking in the dark pounding fresh prints into the moist soil of Chorro Grande Trail. We were off to tackle an ambitious mountain endeavor that he had thought up for, uh, fun.

Loosening our muscles walking up the beginning of Chorro trail, we were staring down the barrel of 20 miles with little idea of what to expect, as far as the conditions of the mountain would be in the coming hours. It wasn’t the trail in question so much as the week old snow cover. Take 22 miles up, over and down a 7500 foot mountain and you have a killer day hike. Add some snow and it becomes a punishing trudge.

The silhouette of one pine beside Chorro Grande Trail that makes up the pair known to some as the Sentinel Trees.

Early morning cloud cover. Before long it cleared to a cloudless day. 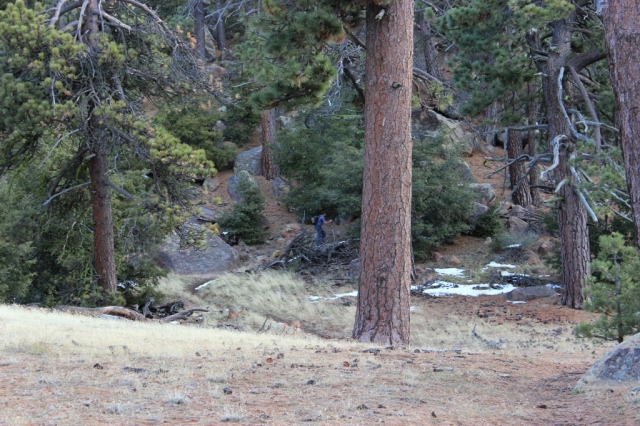 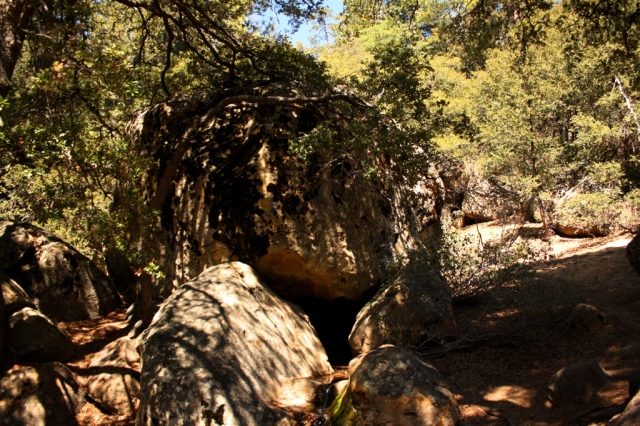 Chorro Spring, as seen in mid-afternoon in May 2011. The water flows out from under the boulder and between the rocks. It is a remarkable spring in the way it flows from under the rock and, for that reason and the surrounding landscape, my favorite seep in the Tri-county region.

Looking from the spring toward Chorro Camp beside the towering pine tree (May 2011).

The view looking westward from the ridgeline of Pine Mountain as we headed east toward Reyes Peak.

Following the climb up Chorro and the walk along the ridgeline, we halted our march at the snow-crusted base of Reyes Peak, where the trail forks and where we left that official designated route to make the summit. Stillman withdrew a set of crampons from his pack and strapped them on his boots like tire chains for autos driving through snow.

I glanced down at my well-worn un-waterproofed boots with little tread left and felt a mite foolish. I knew there would be snow and so it wasn’t that I neglected to bring or forgot gear. I just don’t own any. I have pants with holes in them, boots falling apart at the seams and a decent backpack.

Stillman lead the way, naturally. He broke trail punching footprints through the crunch and mush of week old snow and I slogged along in the holes he left behind, as we settled into what became our midday routine along the snowy ridgeline of Pine Mountain, up to Reyes and across to Haddock and then down the mountain’s north slope. 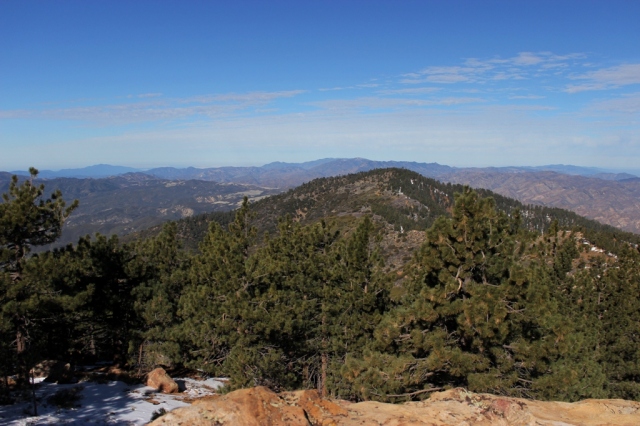 Looking westward from Reyes Peak over the ridgeline we crossed.

Reyes Peak sunburst, Haddock Peak at center. The weather could not have been better!

Here and there Stillman took a peek at his GPS to plot our off-trail course between Reyes and Haddock. This was some awesome hiking! No trail as we plodded through snow beneath an azure sky with the low howl of a slight wind blowing through the pine forest, the trees tinged golden orange with early morning light. As “Macho Man” Randy Savage would say, “Can you dig it?” Oh yeah.

As we labored on through the snow I kept wondering just how deep it would get hoping, obviously, for less not more. It got about as thick as I would have wanted; any deeper and things would have gotten downright rough and rather distasteful. Of course, I was following broken trail. It would have been a lot worse had I been the one punching fresh tracks through the slough.

“This is fun, right?” Stillman quipped.

“It’s only fun after it’s done.” I replied in good humor.

On the way up Haddock I was, not over doing it, but pushing the RPMs a little higher than I would have if I was alone. The thump of pumping blood in my ears and the strain of the ascent, however, made reaching the top all the more worthwhile.

After Haddock, we continued through the forest and Stillman lead us back to the trail after passing over it briefly. Due to the trail being seldom traveled, for one, and that it was covered in snow, route finding by GPS was a necessity even after we located the path once more. And the Navigator did a fine job at it.

View from Haddock Peak. In the distance the Pacific Ocean can be seen blanketed in fog with Santa Cruz Island just visible on the horizon. 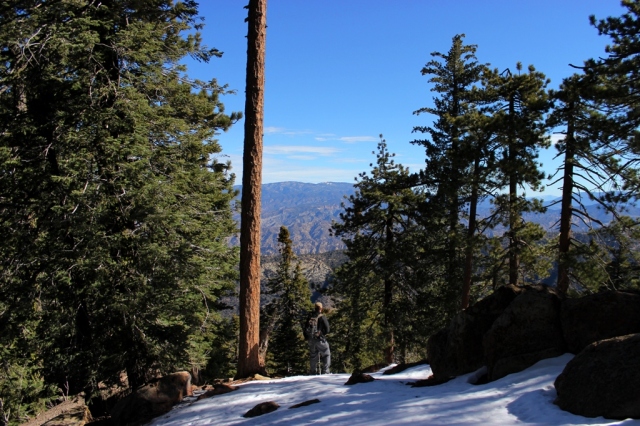 Stillman taking a second to enjoy the view. Actually, I yelled ahead for him to hold up a second so I could snap the shot. You should have seen his body language, heheh. It said: Oh come on, Jack, we don’t have time for this crap, and even if we did you’re ruining my rhythm.

Jack on track in the distance along one of the more visible sections of trail. Photo copyrighted to and provided courtesy of David Stillman.

Stillman checking the GPS on the backside of Pine Mountain on the decent to Haddock Camp. The trail was not always visible. This shot was taken just before we barged through a drift of snow that was the deepest of the day; I was sinking up over my knee into the frozen mush. 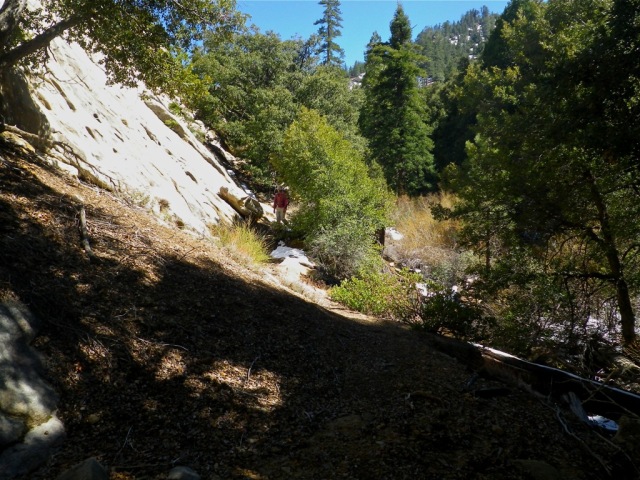 Somewhere along the trail on the northside of Pine Mountain after our decent from Haddock Peak. Photo copyrighted to and provided courtesy of David Stillman.

I believe this section of trail is found just after Haddock Camp as we headed toward Beartrap Camp during the last eight miles of the hike. Photo copyrighted to and provided courtesy of David Stillman.

“Happiness consists of getting your hair cut every two weeks and watching your neighbor fall off his roof.”

Having reached Haddock Camp, we came upon the brand new, but abandoned gear of at least two backpackers. There were two snow-covered blown down tents and sleeping bags and a pair of sandals among other things. Somebody had apparently drained their bladder into a plastic bottle during the night while hole up in their tent; the pee-filled container lay beside the fire ring a few feet away.

“I wonder what time they left,” I asked. I was thinking like in the middle of the night, after they could bear no more teeth chattering mountain weather and so fled the scene of what must of felt like impending doom. But considering how ill prepared they were that doesn’t make sense. Stillman offered up a more plausible scenario: They probably suffered through a miserably long, frigid, and windy night in their crappy bags and tents and then hit the trail home first thing in the morning with as little gear as possible.

We continued down the snowy Gene Marshall National Recreation Trail from Haddock Camp, through Bear Trap Camp, Upper Reyes Camp and on down the canyon to the trailhead where we had dropped off a truck in the dark half a day earlier.

Thanks to Stillman, I now look at hiking with an entirely new perspective of what can be accomplished in a day around these parts. It felt good to push the perceived limits of my ability. And to realize that those limits were self-imposed. There comes a point on such a hike when you must fully commit to the goal at hand and the final destination despite the unknown you’re heading into. You either tuck tail and turn back from where you came or proceed and hope for the best, hope you stay on trail, hope it’s not too overgrown and hope you have sufficient daylight. That’s livin’!

The south face of Haddock Peak as seen from Highway 33 on the drive home. We hiked across the ridgeline and down its north slope. The banner feature photo for this post was taken from the same place as this picture but on Monday, which was four days after our hike and just following a new storm which had laid down a fresh coat of snow.

For another perspective on this epic day hike and more photos, as well as tales of other great outdoor ventures, visit the mountain blog of David Stillman.

And for a more lively, active view of the hike watch the video taken by Stillman along our way. It provides a peek at what the hike was really like in a way that photos cannot convey: