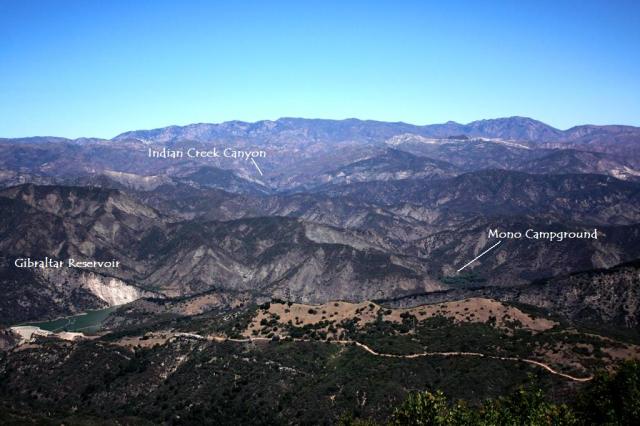 “My companion and I, for I sometimes have a companion, take pleasure in fancying ourselves knights of a new, or rather an old, order, —not Equestrians or Chevaliers, not Ritters or Riders, but Walkers, a still more ancient and honorable class, I trust. … No wealth can buy the requisite leisure, freedom, and independence which are the capital in this profession.”

Stillman and I spent two days hiking the better part of Indian Creek. We enjoyed two days of the classic Santa Barbara frontcountry/backcountry seasonal atmospheric dichotomy, whereby the coastal Santa Ynez Mountains serve as a dam baring the inflow of maritime fog into the hinterlands. While the immediate coast was smothered in the confines of a cool, heavy marine layer, we escaped to the backcountry wilderness which was basking in the sunny warmth of spring under an expansive blue dome.

As per usual we set off afoot around dawn, eagerly looking forward to the next 36 hours of woodland walking, each of us “self-contained,” as Steinbeck once wrote, “a kind of casual turtle carrying his house on his back.”

After a strenuous push up the narrowing canyon, boulder hopping, sloshing through waist deep pools, scrambling up and down stony slopes, scooting across ledges, and trudging along at a humble but steady pace, we finally arrived in the latter half of the afternoon.

Stillman single-handedly turned the long abandoned site, buried in a deep layer of leaf mulch, into a functional camp, stoked up a fire and then prepared the classic western meal: beans, bread and steak. Filet Mignon grilled over an oak wood fire, sourdough slathered in butter and baked beans. Good stuff, Maynard, I’m tellin’ ya.

Topping it off with a hot cup of coffee or two, we sat into the night some time watchin’ the flutter of the fire, listenin’ to the chirp and croak of crickets and frogs, the trickling stream, and havin’ a damn fine night. By around eight next morn, we were packed up and stepping back into the cool water of Indian Creek on our way back.

The view up Indian Canyon as seen from Meadow Camp. 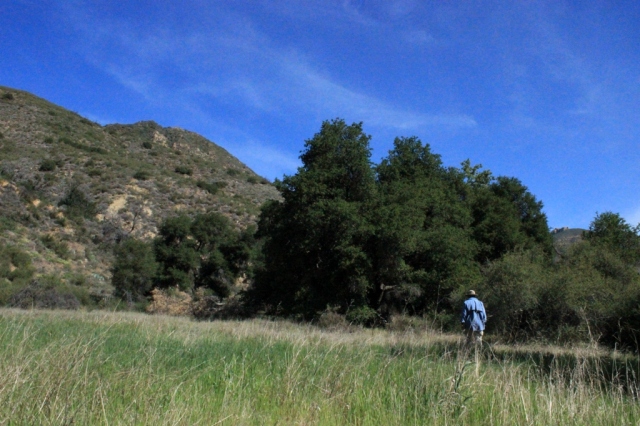 Indian Canyon Camp lies under the oaks in a grassy field above the creek. From there the trail ends and it’s into the creek upstream any which way you want.

While lower Mono Creek was dry, Indian Creek was flowing all its way down canyon. It was interesting to note the sedimentary change in lower Indian Creek falls and the creek itself in general. When I was last there in June of 2010, three years after the Zaca Fire, the second largest wildfire on record in California and which incinerated the area, the upper pool was filled with gravel and sand.

The following rainy season brought an abundance of precipitation, well above normal, which must have finally flushed the pool clean of sediment, sending it downstream to eventually further fill in the increasingly shallow Gibraltar Reservoir. In the bright afternoon sun the pool is colored with that ever inviting characteristic emerald hue, though its intensity is not fully reflected in these most recent photos.

The creek itself has also largely been flushed clear. Whereas in 2010 many stretches resembled something like a gravel garden path that made for easy walking through the water, nowadays the creek is noticeably rockier, the thick layer of gravel gone.

Same pool as seen in April 2013. Note the absence of sediment, the difference in water volume over the falls in this drier year, as well as the tall green tree behind Stillman, which in the photo from 2010 is no more than a small sprout barely visible in the shadows. 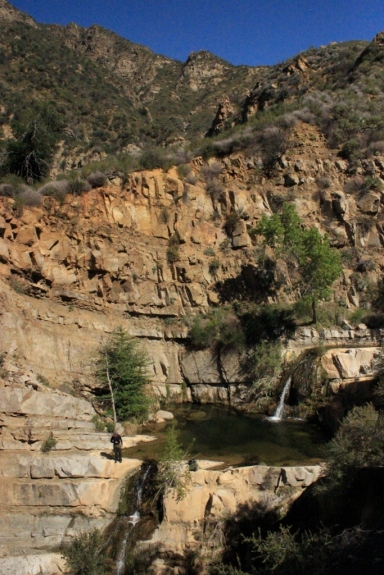 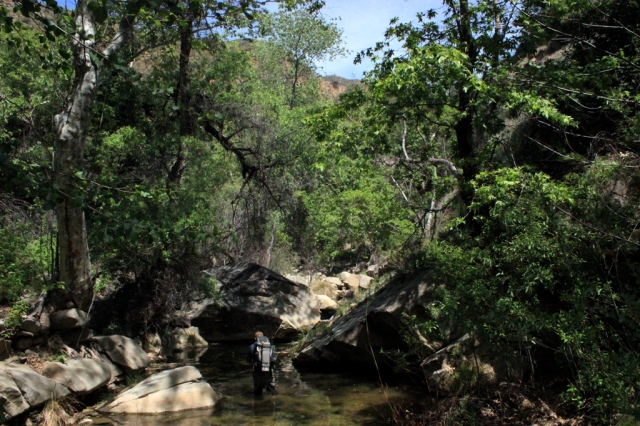 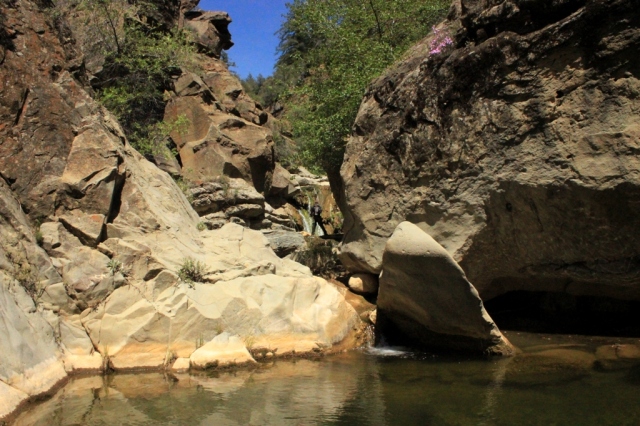 Stillman taking a gander at a narrow spot in the canyon.

Looking downstream through the narrows of Indian Creek.

Looking upstream at the narrows.