The stairway to Arlington climbing out of Mission Canyon.

“Genji climbed the hill behind the temple and looked off toward the city. The forests receded into a spring haze.

‘Like a painting,’ he said. ‘People who live in such a place can hardly want to be anywhere else.'”

A smattering of rain has moistened the Santa Ynez Mountains raising the seasonal precipitation total to 72 percent of normal county-wide, better than each of the four previous seasons, but not what was expected this year during the strongest El Nino ever recorded. The weather is cool. A low ceiling of shifting cloud cover obscures the peaks over town sprinkling them in intermittent showers of light rain.

Be back by four, she says. That allows six hours, which isn’t enough time, but I go anyways. I have to go. “The mountains are calling and I must go,” John Muir wrote. I’ve never heard that call, but I think I’ve felt it.

Drop by seldom seen drop on through another warm and dry winter in this fifth year of epic drought. Any moisture falling from the sky provides an irresistible impetus to get out for a walk in conditions that are fleeting and seem to be increasingly uncommon.

I keep thinking I need to read Edward Abbey again to get used to the coming desert. 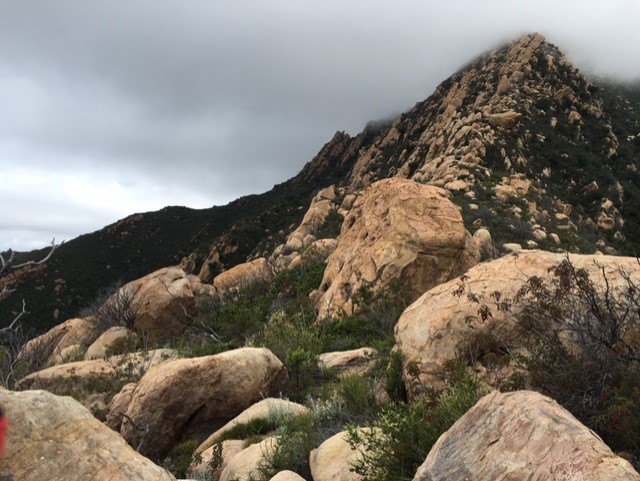 Another look up the stairway to Arlington. The trail winds through the rocks to summit in the clouds.

The trail passes under this jumble of boulders shown here and below.

On spotless days exceptional long views from the eastern salient of Arlington Peak; look over the canyons to the Santa Barbara littoral and the Pacific Ocean and Channel Islands beyond. What about the messy days? With low clouds and rain the hike takes on a mysterious and intriguing quality.

On cloudless days land lays bare under glaring sun; the nude sunbather on the beach leaving nothing to the imagination. The curves of the mountain, the hills, ridges, valleys and peaks are seen for what they are. It’s all out in the open.

Secreted away in clouds and only partly seen, however, an eager imagination will paint fantastic landscapes, completing the rest of the unseen picture in the mind and making the peaks rise another few thousand feet. A brief flash of a thought and it’s gone. The intrigued mind takes over as the mental image fades. Who knows what could be up there hidden amid the swirling mist of the coastal cloud forest? What country am I in? The mind wanders, enamored with the possibilities.

The airborne droplets flow over the sandstone and chaparral of the mountain slopes, thickening and thinning, enveloping and reducing vision to a matter of feet, the rocky hillside fading into the grayness, then release from the cool darkened grip gives way to views thousands of feet below.

I march on along a trail I’ve walked before, but through an enchanted cloudland I’ve never seen, a hunched character in the hazy montane landscape of a Japanese sansui painting. I perch on a boulder gazing into the distance over the city as a red-tailed hawk floats by at eye level screaming at me. The mind wanders, enamored with the possibilities. 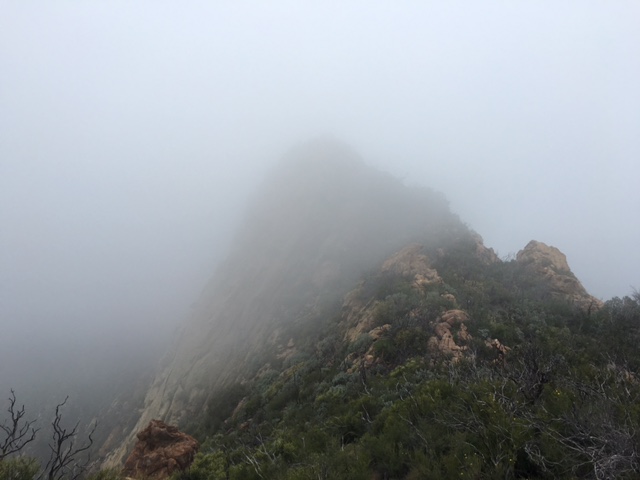 Approaching Cathedral Peak along the saddle from Arlington.

Looking out of Cathedral Peak cave over Santa Barbara and the Pacific Ocean. 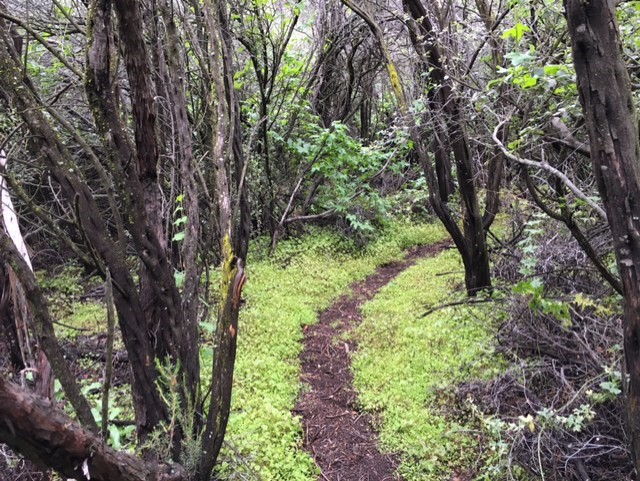 The trail cutting through a patch of miner’s lettuce along the saddle between Cathedral and La Cumbre peaks. 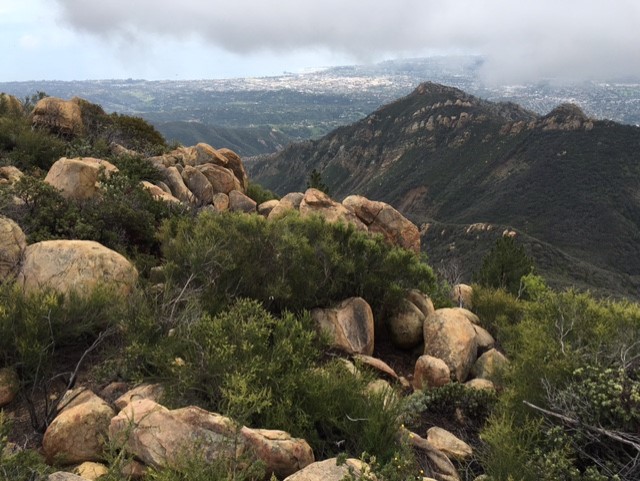 View from La Cumbre Peak of the backsides of Cathedral and Arlington.

The banner feature photo for the blog shows the peaks in question lined up; the pyramidal Arlington just right of center frame, the huge sandstone knob of Cathedral, and the conifer-capped mound of La Cumbre on the top left.

After a couple of hours of sipping warm Santa Barbara tap water—an acquired taste—the shady and cool low saddle between Cathedral and La Cumbre provides an abundance of crisp and succulent miner’s lettuce beaded with rainwater. I kneel down and snatch it up by the handful, eagerly chomping it down and enjoying the tasty refreshment before the slog up the steep south face of La Cumbre.

Rain begins falling somewhere along the three mile stretch of Camino Cielo Road on my way from La Cumbre to Arroyo Burro Trail. I had walked from Tunnel Trailhead up to Arlington summit, to Cathedral cave and on up to La Cumbre. It’s a steep and sassy two and a half miles up.

My feet and legs like the flat asphalt road and push the pace leaving the battered old fire lookout atop La Cumbre behind without stopping to rest. But my mind does not settle until reaching Arroyo Burro. Back on the dirt; into the bowling upper canyon of San Antonio Creek; the rain pattering against me. You know the smell of wetted woods and fields of grass; the soft and subtle sounds of damp forested mountains, a trickling creek. 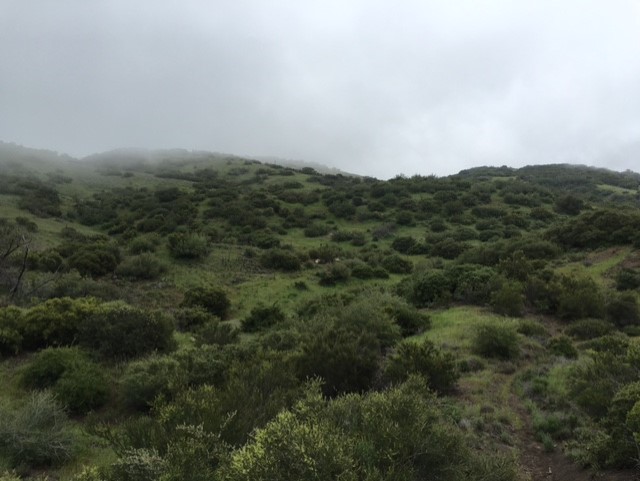 Arroyo Burro Trail runs out of the lower right-hand corner of the frame as it drops into the canyon shown below. 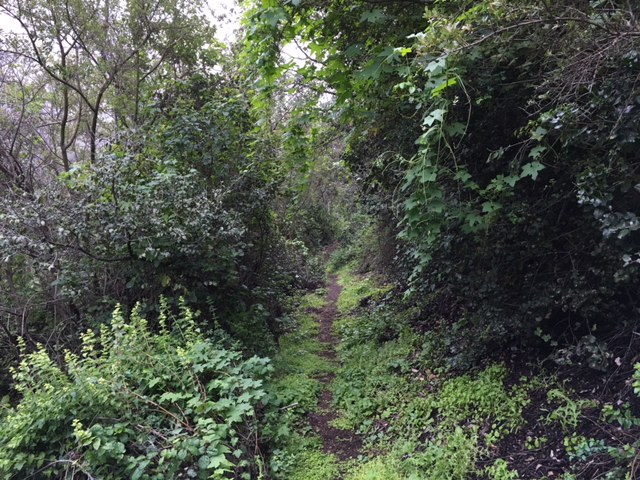 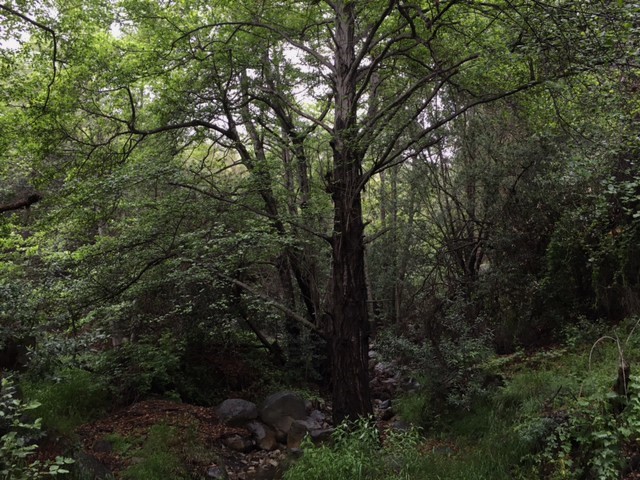 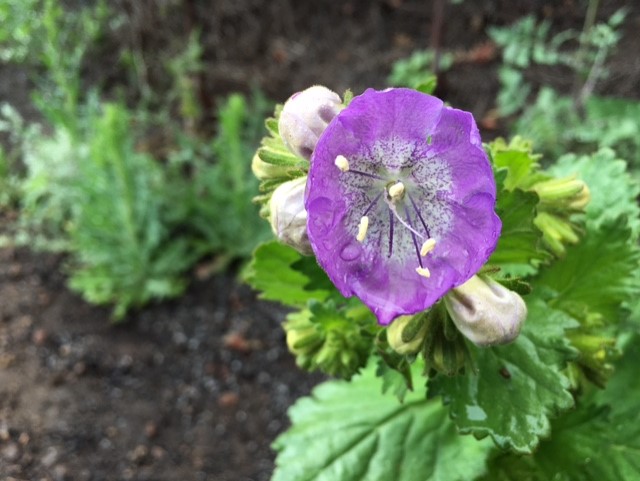 A California newt (Taricha torosa) crossing the trail heading away from the creek.

Five hours into the walk and I’m on autopilot stomping along Arroyo Burro in the rain, traversing eastward below Barger Peak after having climbed out of San Antonio Creek. I’m energetic, my body eager to walk, my mind happy to endure. I feel like I have “the body of a taught, preteen Swedish boy.” I want to complete the 14 mile loop, merging onto Jesusita Trail and back up to Tunnel Trailhead where I parked, but I’m out of time, supposed to be home. That’s what she said.

Then I see the rattler. A juvenile coiled in the middle of the trail. On a cool and rainy day in late afternoon it’s among the last things I expect to see.

Fortunately it’s wound up in a circular shape that stands out from its surroundings and I spot it and it registers accurately in the brain. Had it been stretched out my eyes might have seen it, but my mind might have passed it off as just another twig on the trail. Who expects a snake in the rain on a cool afternoon? Its fangs would have readily pierced my thin and worn nylon pants; a wee spot o’ wild in the wilderness. I stop. Admire. And plod on.

The trail becomes overgrown with scrub and grass, hard to impossible to see clearly. After the viper it’s not a comforting occurrence. Were I to slow enough to make certain I see the trail and avoid stepping on a snake it would take me four times as long to finish the hike. I stomp on without regard or slowing my pace, plowing through the drenched brush getting showered in water and playing the odds, hoping they’re in my favor, that I won’t get bit. 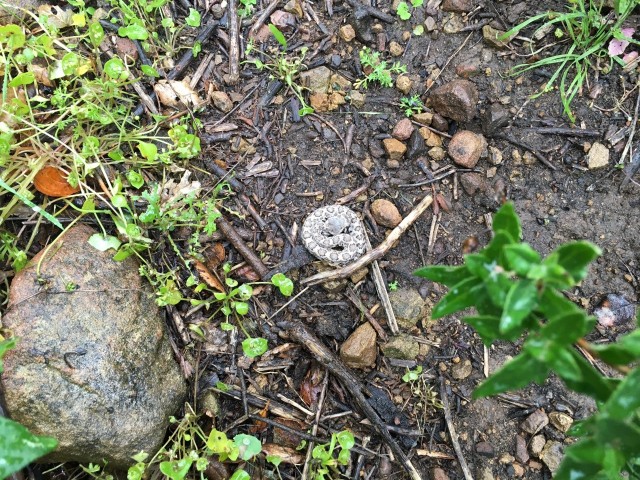 I opt out of the hike prematurely, leaving Arroyo Burro and walking down lower Jesusita to Steven’s Park, where I get a ride home just a few minutes away. I suppose the distance for the day at 11 miles.

Next go around I’ll have to allow enough time to complete the loop; the Santa Barbara Triple Crown. Start at Steven’s Park, up Jesusita to Mission Canyon, up to Arlington Peak, Cathedral Peak, La Cumbre Peak, across Camino Cielo, and down Arroyo Burro to Jesusita and back to Steven’s.

It’s nowhere near as long or grueling as my friend Stillman’s 28 mile “masochistic odyssey” that he dubbed the Ojai Triple Crown, but it’s a worthy hike nonetheless. I’d rate it, myself, as the best hike in the Santa Barbara frontcountry.

View from Arroyo Burro Trail looking up San Roque Canyon at the three peaks from whence I came.