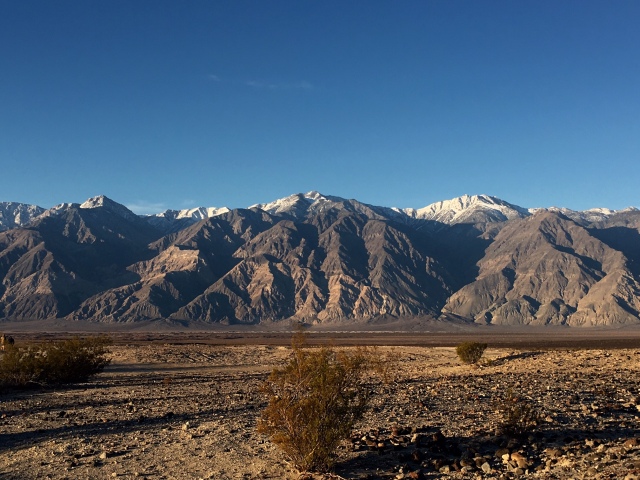 “Who heard the Desert whispering? The gray prospector, hope-wandering that land of vacant sadness, saw through his burning thirst, where from far receding margins gazed the wrinkled ghastly ranges. . . And on the long gravel washes of the Panamints, where terrible Death Valley yawned in awful silence. . .”

The “awful silence” still lives, a character of the land as much as its visible features or wildlife. Suffering “hunger and thirst” for months on end with inadequate supplies, the deafening absence of sound was understandably awful back then. I imagine it could drive some people mad even today.

Within the desolate basins lie vast seas of absolute silence. The soundlessness is huge. It’s heavy. It presses against a body. It’s always waiting out there, ready to rush in.

The silence here is awesome. 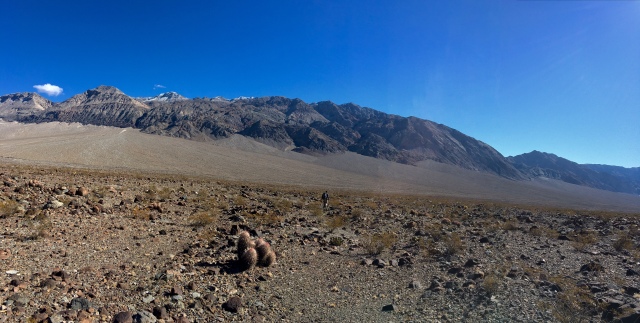 Humanity afoot, but a tender speck.

“In the neuter austerity of that terrain all phenomena were bequeathed a strange equality and no one thing nor spider nor stone nor blade of grass could put forth claim to precedence. The very clarity of these articles belied their familiarity, for the eye predicates the whole on some feature or part and here was nothing more luminous than another and nothing more enshadowed and in the optical democracy of such landscapes all preference is made whimsical and a man and a rock become endowed with unguessed kinship.”

The sheer immensity of the place has an inebriating effect on the mind.

Hundred mile unobstructed views over barren fields of grit and rock, the valley a colossal volume of wide-open space. Naked mountains with faces heavily creased by thousands of years of runoff clench the earth with plummeting ridgelines like the gnarled fingers of monstrous fists jammed into the ground, a wall of peaks rising straight from the valley floor to over ten thousand feet.

Numerous petroglyphs resembling pregnant women are etched into the face of this white rock outcrop. It is said by some to be a fertility site.

I stand gazing across the arroyo at the massive footing of alluvium running along the base of the mountains. The peaks appear half buried in fans of sediment forced from the range a particle at a time by the relentless work of the elements.

The miles long sweep of these stony deposits all pointing down the arroyo give physical expression to the tremendous gravitational forces yanking at the earth, and it’s almost as if I can feel the planetary pull sucking my body down the canyon.

Hiking here is a much different experience than plodding down a trail surrounded by chaparral covered mountains or through the narrow cropped view of a deep forested canyon. It’s more than the difference between desert and forest.

There’s a sensation here unlike anything in the forest. Some sort of power seems to emanate from the unfathomable openness. A hell of a land to gaze upon, the earth here seems to hit with a physical impact I can feel in some strange and subtle but intense way.

Anywhere, generally, when looking into the void of cloudless sky overhead it is like looking at a huge bare wall. There is nothing to define the space and so it’s difficult to comprehend its size. When the dot of a jet flies by thirty-thousand feet above then one begins to understand how vast that sea of space really is and the mind can make some sense of it.

Here the distant emptiness is given definition and depth and scale by the big barren mountain ranges running as backdrops across flatlands covered in little more than stones. That there’s nothing between the eye and the ends of these flats but cobblestones, nothing like mountains or stands of timber to obscure the open space, seems to accentuate the feeling of largeness that so characterizes the place.

I stop walking, the sudden halt of feet rhythmically crunching across the grit and pebbles. Silence rushes in. I spin a slow circle, peering into the indiscernible distance and the immense sea of space enveloping me. Here humanity afoot is but a tender speck disappeared amid the harsh unforgiving vastness, a grain of soft sediment no better than a rock.

I feel puny and insignificant, humbled. Cleansed of the hubris that too often plagues humanity’s relationship with nature in our belief that we are ever in control, and always the dominant factor in the world. Here a good perspective on life can be found. 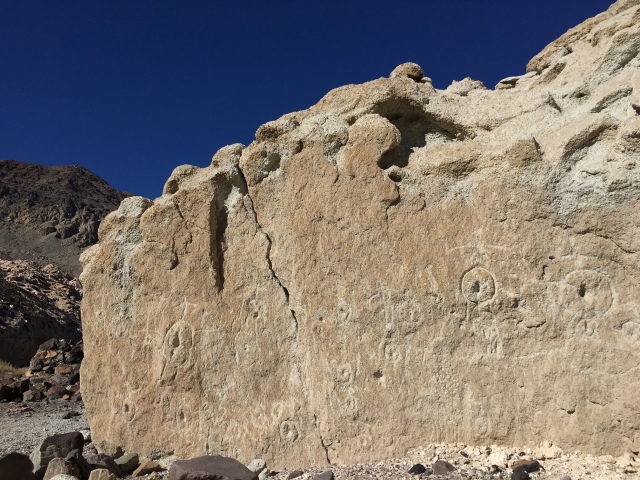 Pregnant women? I suppose they look like people with big bellies and big belly buttons.

The bird figure petroglyphs, scratched into a wall of solidified prehistoric volcanic ash, are remarkably large relative my experience in the land of generally much smaller Chumash pictographs.

The size of the birds seems fitting in the context of the immensity of the surrounding landscape, as if land is the call and art the response. (Call and Response)

Many different motifs, some clearly identifiable such as bighorn sheep, decorate several different rock faces in the canyon, including a purported fertility site with pregnant women and a long panel with many bighorn sheep and much more.

The birds seem to me to be a prominent feature for their size and the way they were rendered as stand alone figures. These are impressive petroglyphs.

Looking up canyon from the fertility site toward where the birds are located.

I don’t know what type of birds the rock art is supposed to depict, if any particular bird at all for that matter. Perhaps the birds represent an imaginary creature made up by the artist. I am hesitant to assume anything when so little is known.

Some say they are mythical thunderbirds, the pecked chest pattern symbolizing rain drops. Others say they are condors by virtue of their size and body characteristics.

It seems to me the most prominent and distinguishing characteristic of the birds are their pecked or dotted chests. And from what limited personal experience I have viewing condors, the markings on the chest are a remarkably accurate representation of what the play of sunshine looks like off the condor’s fringe of long, thin neck and chest feathers.

A lesser distinction may be the depiction of raked wings; wings spread but slightly arched with wingtips pointed downward. This posture is seen among perched California condors, but also other birds as well.

On these two points it seems that the rock art can be seen as a fairly accurate depiction of real condors, considering the minimalistic medium and tools used to create it.

It’s a wild guess. “I know one thing; that I know nothing.”

A long panel depicting many bighorn sheep and lots more. Note what appears to be a human figure on the left, below a bighorn sheep.

Same panel as the previous photo.

The biggest bird here is about three feet long, I believe. I didn’t measure them exactly. 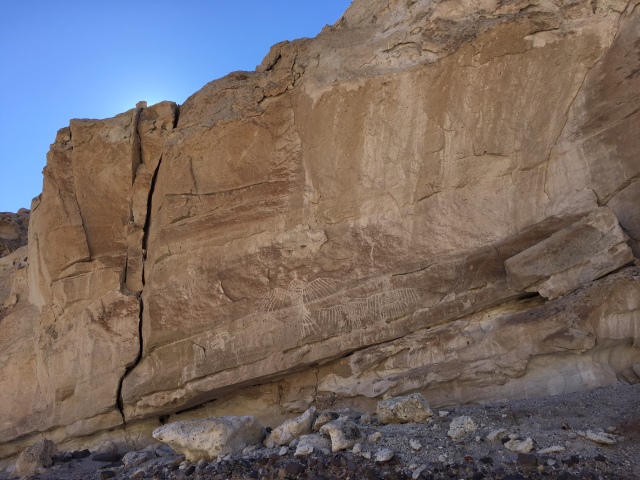 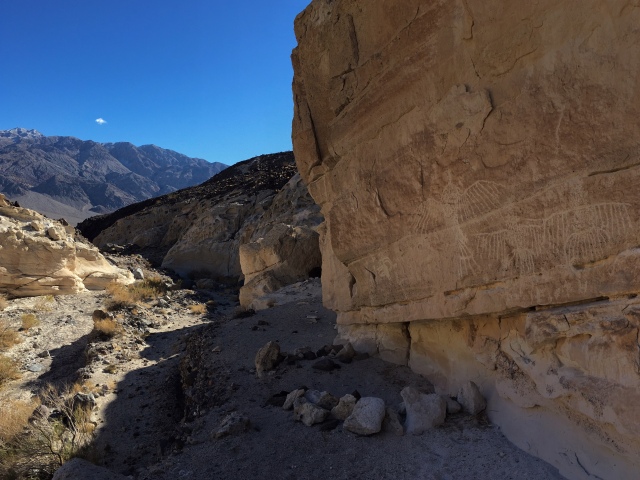