“Great intervals of silence are evidently conducive to our well-being. A meditative stillness, suggests Gary Snyder, was invented by waiting hunters. Perhaps this reflected the poised and ruminating hush of mothers of sleeping infants. High levels of sound have been directly linked to degenerative diseases in urban life.”

I rolled slowly down into Quatal Canyon toward Cuyama Badlands, the crunch of wheels on a gravely dirt road. Passing Toad Springs Campground, I cast a casual glance over my left shoulder at a grizzled and greasy man hanging thin sheets of raw beefsteak over a wire fence.

We locked eyes for a second as I passed. What a look. What a mug. A good face for an artist to render in woodcut. Scruffy and tanned and weathered and creased and glistening in the late afternoon mottled light of the forest, a character out of a Clint Eastwood spaghetti western.

Jesus, I thought. What the hell is that psychopath up to? He might have been thinking the same of me. His piercing gaze and the hanging flaps of raw red meat, a primal scene. I was trying hard to step back in time, into the primitive realm of the undeveloped world let alone by humanity. “Seldom used,” Craig Carey wrote of where I was headed. Perfect. And this strange man appeared like a sign post in the forest hinting that I was traveling in the right direction, maybe.

I kept rolling deeper into the shadowy woods, farther from all others and the incessant noise of civilization. Onward forth toward the great soul-soothing silence of wildness. 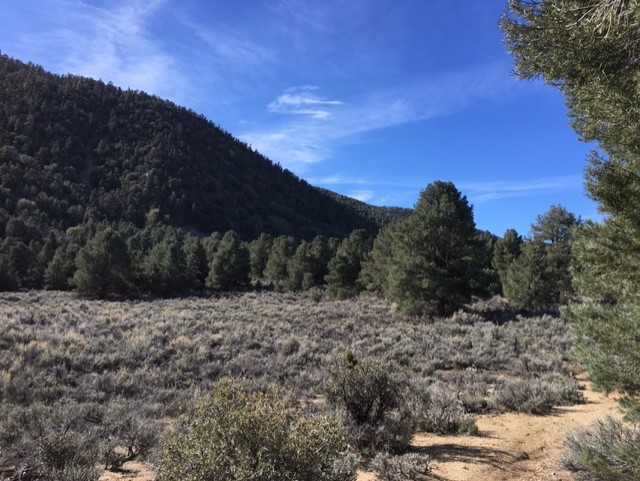 Trail along foothills of Mount Pinos.

The trailhead was unmarked, which seems fitting for the southern Los Padres National Forest, where official hiking trails are often signless, overgrown, difficult to find, and not easy to follow if located. “Navigating for the correct trail can be a bit tricky,” Carey wrote.

An article appearing in the Los Angeles Times in 1990 described different portions of this trail as “the unsigned trailhead,” “unsigned Mesa Spring Trail,” “an unsigned trail junction,” and “a (poorly) signed trail junction.” Twenty-six years later it remains much the same, fortunately. I saw the sign for the camp on the ground last I was there a few years ago. I didn’t see it there this go around.

There is enough room for two vehicles to park off the dirt road at the trailhead, maybe three can fit with skill. Without four-wheel drive, and the sort of driving ability and gusto for risk that usually accompany such vehicles, the parking spot here might best be described to the average driver of a car as, “Wait, what? I’m really supposed to park there? You’ve got to be kidding me!” It wouldn’t take much to get stuck. 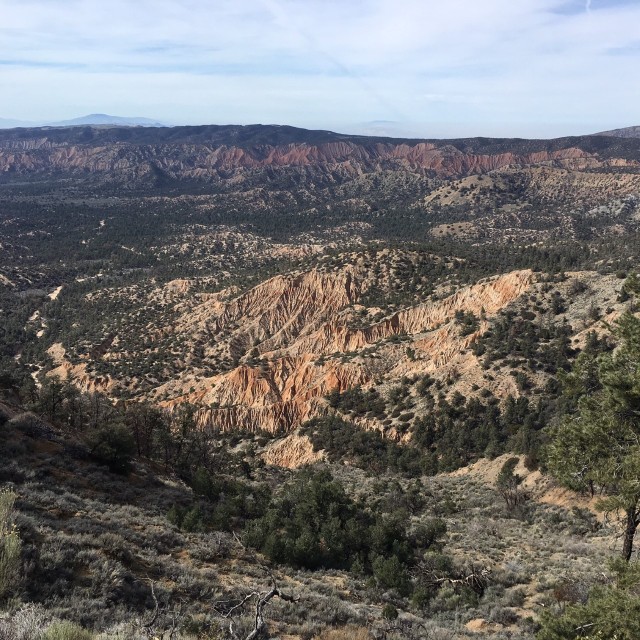 On the way out of town I stopped at the beach and surfed for hours, lured and distracted by a good winter swell. I reached the trailhead late in the afternoon and the sun had nearly set. It was impossible to hike to camp before darkness swallowed the land.

Half an hour after walking away from my vehicle I left the trail. I stepped carefully through breaks in the scrub oak and spotty tangle of brush so as to leave as little trace as possible in the delicate dry habitat.

I found an opening of gravelly soil surrounded by scrub and accented with a single piñon pine. I spread out my bedroll, set alight a small pile of thin branches and twigs, pushed my can of water aside the dancing flame to boil, and laid upon the earth to watch the sunset colors peak and fade to black.

The next morning I scooped up the small pile of powdery ash and scattered it about the area beneath scrub oaks. Scraping up a bit of soil from here and there under the brush, I sprinkled it over the burn site for concealment and then topped it with a dead branch lying nearby. I left only footprints visible as I marched away toward Mesa Spring in the cool morning light.

I laid in the shade at camp listening to the ebb and and flow of wind through trees.

I wandered through miles of piñon forest, walked San Emigdio potrero, and strolled aimlessly along differing lengths of different trails searching for something I never lost, something nobody had ever left behind, something that most people have no interest in and do not value. What it is I’m not sure. I never found it. The search will continue.

In the mornings and afternoons I sat on a slope along the foothills of Mount Pinos, overlooking the forest of piñon pine backed by Pine Mountain Ridge in the bluey distance.

For three days I watched intently the timeless show rendered in pacific hues of green and blue, tinged orange yellow and red at dawn and dusk, the calming low desolate murmur of wind blown pine needles the soundtrack.

I saw nobody; the sort of body a body like me likes to see when enjoying the medicinal qualities of a great interval of solitude in the woods.

I felt a million miles away from all that is said to matter in the metropolis, alone swaddled in the great therapeutic silence of wildness; salve for the soul. If somebody jarred the feeling I’d be a buyer, maybe even a junkie.

“What is there to do out there?” Somebody may ask from the crowd that constantly demands the throbbing pulse of instant gratification, and the glittering, overt, up-in-your-wide-eyed-face smash of Las Vegas-like stimuli. “Here we are now, entertain us,” Kurt Cobain said.

Nothing. Nothing at all. There’s nothing to do. 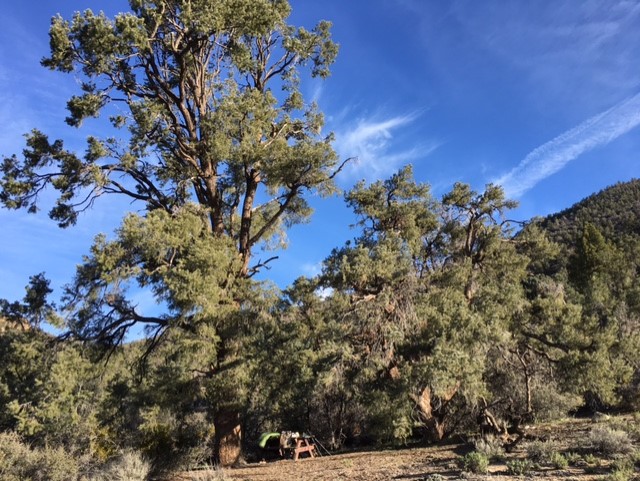 13 Responses to A Great Interval of Silence, Chumash Wilderness