Letter to Editor Regarding Plastic Pollution 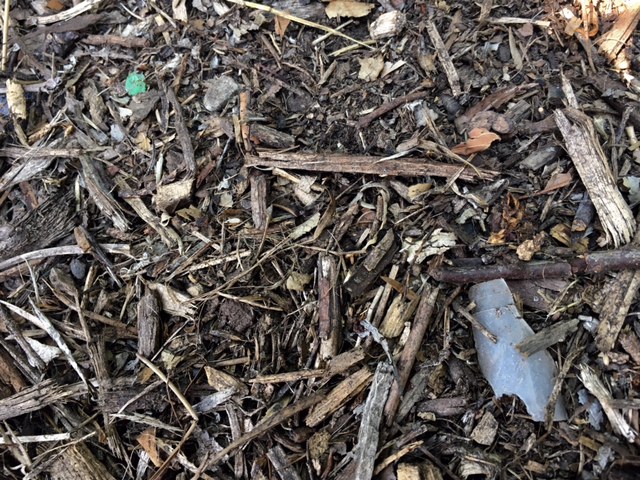 A snapshot showing plastic debris in the mulch. I walked out my back door, knelt down in a random spot in the garden, looked for just a second to spot some plastic, and took the photo. So pervasive is the plastic trash in the mulch that I can find it anywhere I kneel within seconds of looking without even digging.

I have made a point of trying to keep this weblog free of politics and tightly focused on my experiences when recreating outdoors and my related interests in nature and history.

Believe me, you do not want to hear from me about politics!

I would for a moment, however, and I beg your pardon here, like to publish a letter I emailed to a local news outlet months ago regarding the issue of plastic pollution and drinking straws in Santa Barbara County.

Perhaps this here may serve in some tiny way to raise awareness and spur discussion about this issue.

For context readers may hit the link below to a Noozhawk story regarding the Santa Barbara City Council’s decision last year to ban plastic drinking straws, which is the story that spurred my letter.

A small sampling of the plastic found in the mulch. This took about 10 seconds to collect while kneeling in one spot.

In 2008, I wrote an article published in a local magazine describing the catastrophic impact of plastic pollution in our oceans and the “Great Pacific Garbage Patch” off the coast of California.

I had noted at the time that, in 2005, a scientist had found a scrap of plastic inside the stomach of a dead albatross. Countless marine creatures die from ingesting such trash, from fish to birds to whales.

By tracing the origin of a serial number on the shard of plastic, the researcher found that it had come from a World War II-era airplane.

The discovery served as a shocking testament to the longevity and lethality of plastic pollution. Six decades later the small piece of trash was still a killer.

A decade ago when I wrote that article, I described the problem as a “a global blight of epic proportions.”

At that time researchers taking samples of sea water in certain places found that bits of plastic outnumbered plankton by as much as 6-to-1.

What must the ratio be now?

In recent months, numerous international news headlines have chronicled shocking accumulations of plastic garbage washing ashore in various locales across the world, from Indonesia to the Dominican Republic.

The sea is awash in plastic.

As a side note, that’s the same jail sentence given to some rapists in this county.

Something seems a tad askew. Nevertheless, the issue of plastic pollution is a serious problem.

The City of Santa Barbara advises residents to spread free mulch on their yards, which is available for self-service pick up at a couple of locations.

The City even pays for its water customers to have mulch delivered by the dump truck load.

But there is a huge problem here: The mulch is contaminated with large quantities of plastic.

Surely I cannot possibly be the only one to have noticed.

Ironically, the City tells us that the mulch is made from the garden clippings we put in our so-called “green” yard and garden recycle bins.

The City promotes the use of this contaminated mulch wholeheartedly with a full-throated promotion of the practice under, of all labels, and once more ever so ironically, the tab “organic.” See the City’s page here: Mulch Does A Garden Good.

In other words, under the advice and financial sponsorship of the City and their dubious assertions of “natural,” “organic,” “green” mulch, plastic is being spread across the land in large quantities at the same time the City launched it’s anti-plastic drinking straw crusade.

Does this make any sense to anybody out there? It’s utterly, and obviously, senseless.

Day after day, year after year, the plastic is being spread.

I made the colossal mistake of mulching my garden with a load delivered to my home.

Now my yard is littered with bits of plastic. It. Is. Everywhere.

As the mulch biodegrades, more bits and pieces of the trash begin showing until I am left with native soil covered in a layer of microplastic confetti.

I have even found bits and pieces of hypodermic needles in this mulch in my yard!

And, considering how plastic photodegrades into dust, the pieces visible to the eye are only a fraction of the amount now on my property.

And what about the rest of the gardens and landscapes across all of Santa Barbara County?

It’s disconcerting to think about how much plastic has been spread over the land out there, as advocated and subsidized by the city for years on end.

There is no doubt that some plastic washes into streets, sewers, creeks and, eventually, the ocean.

This was precisely the concern the City had in mind when passing the straw ban; plastic pollution getting into streams and the ocean.

If we as as a community are serious about addressing the deadly and poisonous problem of plastic pollution, then this issue must certainly be addressed with resolve.

Something must be done.

Will something ever be done?

I have yet to see any public discussion about this issue at all. Please show me something I’ve missed. Where and when has this issue been raised?

I suspect that an immediate moratorium on the plastic mulch program, at least until this issue can be remedied, would do far more in reducing plastic pollution than the straw ban and the City Council’s lunacy of six month jail sentences for straw-use violators.

Such a halt would certainly be no more drastic than giving straw providers or users the same jail sentence as rapists.

9 Responses to Letter to Editor Regarding Plastic Pollution