Campfire night under the pine at Pine Mountain Lodge Camp.

Last November I set off in late afternoon on the punishing climb up the Gene Marshall Trail from the Piedra Blanca trailhead to the top of Pine Mountain and the camp near the old Pine Mountain Lodge site .

Don’t ask me why I decided on that route. I’d respond that it was the closest trailhead and the shortest distance to the camp, which isn’t a good answer. You’d have to be some kind of masochist to actually enjoy the grueling uphill trudge. Okay, I might be a little dramatic here, but I’m not a mountaineer-type that routinely seeks out high peaks to climb so six miles of uphill and 3000 feet of elevation gain is plenty enough to start me whining.

I had a leg cramp near the crest of the trail just as the sunlight was starting to noticeably wane. I had a fleeting thought of staying the night right there, but knew I was too close to stop and so lumbered the remaining few hundred yards up the slope, through the cedar trees and toward the camp.

As I walked the flats atop the mountain I heard voices, which turned my typically irascible mood in its usual direction. I don’t mean to suggest that I necessarily have a problem with other hikers, but I certainly don’t hike for hours on end, sweating profusely and straining beneath a loaded pack to find myself surrounded by crowds. That is precisely what I seek to escape. It’s like hiking into a remote surf break hoping to score empty waves and seeing a couple of guys already in the water when you get there.

I moseyed on down the trail to confirm the situation and saw two guys chatting in camp and so turned and headed back down the small creek and through the bush. Fortunately the other camp was vacant. I quickly unpacked and set up shop and sparked a fire as darkness enveloped the land in its cold grasp. 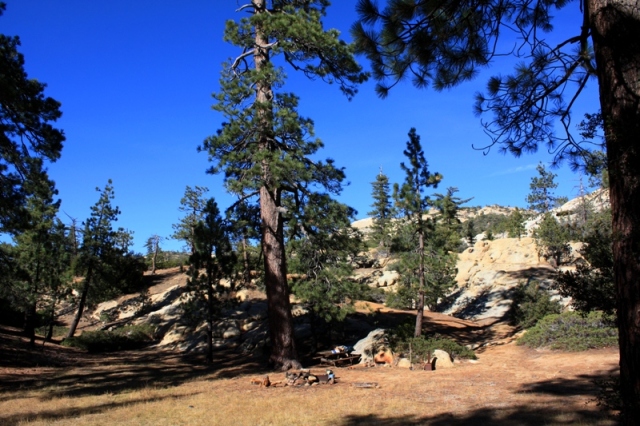 Pine Mountain Lodge Camp. An old ice can stove can be seen to the right of the table. The cave shown in the photos below can be seen here toward the upper right.

It was chillier than I had hoped with remnants of crusty snow scattered about the shadier pockets of the basin from an early storm, but not thinking it’d cause me problems, I foolishly pitched my tent on the hard packed sand in the mini-meadow in which the camp is located.

It’s a sort of depression surrounded by small hills and rock formations. Just the sort of geography that funnels cold air off the hills and down into the low spot where my tent was. It was a cold night trying to rest on what felt like a slab of refrigerated cement. The hour before dawn really sucked.

The next morning I heard the two fellas over yonder getting ready to haul out. Apparently one of them started off before the other, because they were yelling back and forth to each other for several minutes before their voices faded and I had the mountain to myself.

That afternoon I moved my tent to a more sheltered location. I prepared a deep bed of pine needles under the tent and created a shallow, reclined depression to lay in. The needles served as not only padding, but as insulation, too, being that, typically, the cold ground draws the most heat out of a person during the night. Pine needles are excellent for padding and piled up they create a spongy mattress. I also piled up needles on the exterior of my tent for further insulation. I slept like a baby that second night well cushioned and toasty warm.

I spent my days lounging around reading at my makeshift Rancho Relaxo and hiking around the basin to see what I might see. I walked up the slope south of the camp and to the crest of the hill, which afforded me a spectacular view overlooking Sespe Creek and the Piedra Blanca trailhead area. I found a hole in the well weathered sandstone up there that looked to me to be an Indian grinding stone. 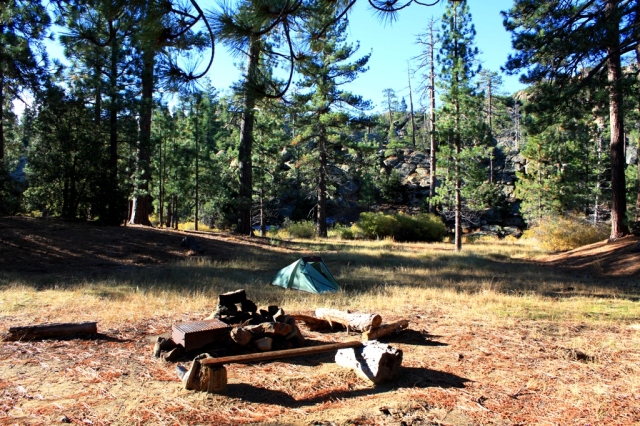 Another view of the camp looking the opposite direction, south, showing where I set up my tent the first night. 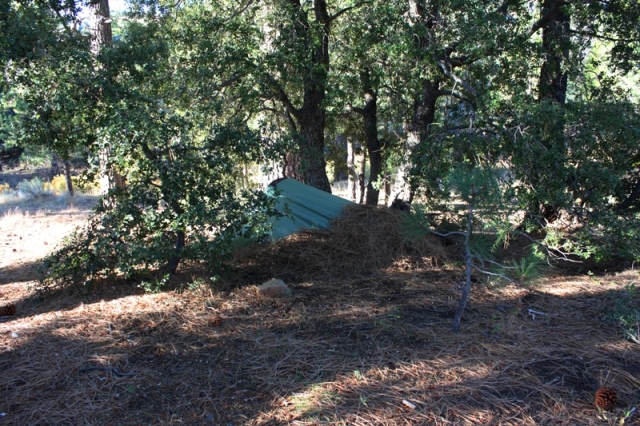 After the first night I moved my tent atop a small rise beneath the pines and oaks (seen in the previous photo on the left). 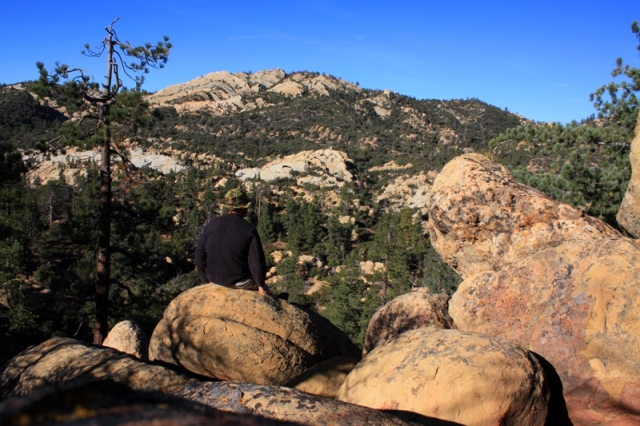 Showing off my pefect posture looking northward over the basin. 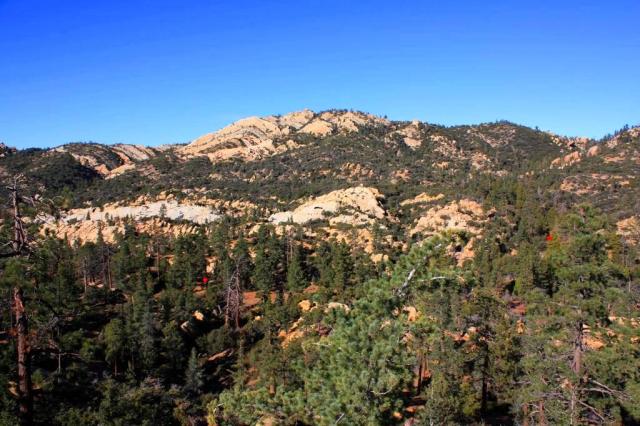 The two dots show the approximate locations of the two campsites. The dot on the left is where the camp shown in the photos here is located.

One of several caves in the area.

I assumed this to be a bedrock mortar, but am unsure. Whether it is or not, with a view like that, it sure is an excellent place for working the pestle and grinding up food!