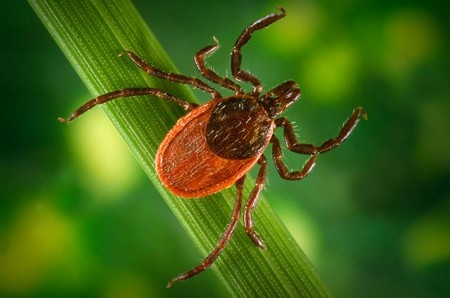 A blacklegged tick (Ixodes scapularis) questing with legs reaching as it waits for a host to pass by. (Centers for Disease Control and Prevention)

Hikers beware. According to the latest April 2012 issue of Veterinary Practice News, we may be in for an unusually abundant tick season and therefore a greater chance at contracting some hideous tick-borne disease.

“An unseasonably warm U.S. winter not only has meant non-stop tick-sightings, it could mean a boom in the parasite population this spring—or sooner, parasitologists say. This correlates with a higher prevalence of tick-borne diseases in dogs and humans.”

Ticks, the parasitic scourge of the forest. I wonder how many ticks I’ve plucked from my skin and swept from my clothing through the years. Loads. While walking trails I’m constantly feeling my beltline for these detestable vermin, where they routinely accumulate. Once in awhile, I’ll spot them clung to the ends of grass along a trail questing with their legs outspread and waiting to hitch onto passing animals for a feeding.

It amazes me, and it seems uncanny, how many times I’ve woken at night, and in the dark confines of my tent felt around with my finger tips, and extracted one of the tiny buggers from my body before it chewed its way into my flesh to suck my blood. The last tick bite I suffered a couple of months ago left behind a two-inch in diameter red, sore rash for nearly a week. I still have a small purplish-red spot at the site of the bite, which occurred within inches of, uh, well, let us say some sensitive male equipment. It was one of the worst reactions I’ve had thus far.

Scanning electron micrograph of tick mouthparts (University of California, Davis). The center serrated rod is what the tick pierces into the flesh of the host to suck its blood. Not only do the serrations make the parasite harder to remove, but most hard ticks secrete a cement-like substance from their salivary glands that effectively glues them in place while feeding.

Ticks are vectors for numerous affections one of which is the painful, debilitating Lyme disease. It’s caused by a type of bacterium and is found in North America, Europe and northern Asia. The disease took its name in America from the Connecticut town of Old Lyme, which is near where it was first found in the United States.

In one study, fifty percent of adult ticks tested in the northeastern United States carried Lyme disease, while in California the rate was remarkably less with only 1.3 percent of tested adult ticks carrying the disease. In California there exists a rather neat phenomenon that occurs between ticks and lizards, which is thought to dramatically lower the rate of Lyme disease found among adult ticks in the state. Western fence lizards unwittingly rid ticks of the disease causing bacteria.

Forty-nine species of ticks are found in California. Among those, two in particular are considered the main vectors of Lyme disease, the deer tick and Western black-legged tick (Ixodes scapularis and Ixodes pacificus). These particular parasites are known as three host ticks, which means they feed on three hosts during their life cycle. They feed mostly on lizards and rodents during their subadult stage and larger mammals when mature.

During the first feeding as a nymph, if hosted by a Western fence lizard, all the Lyme disease causing bacteria will be killed. The lizard’s blood effectively rids the tick of the bacteria it harbors.

“The lizard’s blood contains a substance – probably a heat-sensitive protein – that kills the Lyme disease spirochete, a kind of bacterium,” Robert Lane, professor of insect biology, was quoted as saying in the Berkeleyan, a newspaper for the staff and faculty at University of California, Berkeley. The blood-borne protein transfers from the lizard to the tick and, working through the tick’s system, permanently cleanses the parasite of the disease causing bacteria.

Even when bitten by a tick carrying Lyme, people may be able to avoid contracting the disease by removing the parasite quickly. According to the CDC:

“If you remove a tick quickly (within 24 hours) you can greatly reduce your chances of getting Lyme disease. It takes some time for the Lyme disease-causing bacteria to move from the tick to the host. The longer the tick is attached, the greater the risk of acquiring disease from it.”