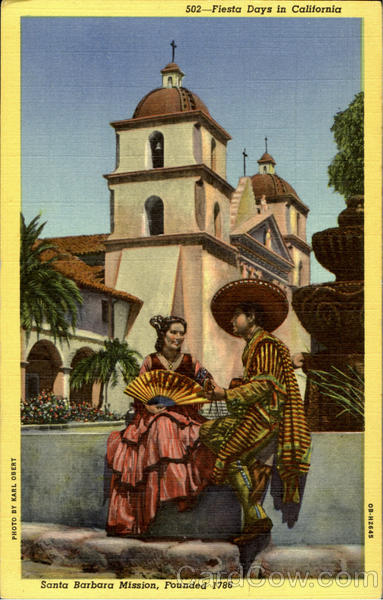 The caption on the back of the vintage postcard shown above:

“California’s glamorous past is recaptured once a year when charming senoritas and gallant senors don colorful native costumes and disport themselves in gay fiestas and pageants.”

A description of Old Spanish Days Fiesta from Santa Barbara: A Guide to the Channel City and Its Environs (1941):

“Beginning with the August full moon and continuing for four days, the Old Spanish Days Fiesta is celebrated by the entire community. Newspapers, newsreels, and national radio broadcasts publicize the event and attract thousands of visitors who join wholeheartedly in the festivities. It is the city’s most democratic festival—men, women, and children from all walks of life donning Spanish costumes and participating in the gaiety. It had its inception on the occasion of the opening of the tradition-surrounded new Lobero Theater in 1924 and, except in 1925, when the earthquake intervened, has been an annual affair ever since.”