“The people venerated the swordfish because they sometimes chased whales ashore and thus the people had a lot of meat.”

Swordfish featured prominently in Chumash culture and were accorded the high status of being the marine equivalent to what humans were terrestrially. (Though it should, perhaps, be noted that in general there in fact was no single homogenous Chumash culture, but there existed a wide diversity of beliefs among the historic people commonly known under that name in contemporary times.)

One of the most important Chumash ceremonies involved the Swordfish Dance performed in regalia comprised of a headdress made of a swordfish skull and bill and a cape decorated with pieces of sparkling abalone shell. Sometimes the costume was made of feathers representing the swordfish.

“During the dance the performer whirled; his headdress feathers looked like a wheel as he spun around, first in one direction and then another, giving thanks. The feathers on his belt whirled also and looked like a stripe.”

An excerpt from the notes of David Banks Rogers, the first curator of anthropology at the Santa Barbara Museum of Natural History, describing in 1944 his find of a Chumash skeleton 18 years earlier that was dressed in the ceremonial regalia of a swordfish dancer:

(The site) is on the crest of an exposed headland over-looking the ocean about three miles west of the Goleta Slough … it bore abundant evidence of having been the site, at different periods, of the three successive cultures which have peopled our coast … and the most remarkable find at this site was made on May 28 (1926) … I encountered a skeleton in the embryonic position, resting on the left side … and everything which comprised this find … was encased in … mud. In spite of this fact it was very evident this was no ordinary burial, for a wide cape composed of symmetrically arranged bits of shell (Haliotis) which had each been carefully shaped and pierced for attachment extended from the side and back of the skull, over the shoulder, suggestive of the scale armor of ancient warriors …

Nor was this all of special interest which attached to this burial. A further removal of the mud … showed that the skull was enclosed in another skull, that of a swordfish, the beak of which extended upward from the forehead and as it lay, pointed due west, in the same general direction in which the heads of all the skeletons in this section had pointed …

Several days later, being somewhat dried, a large part of the adhering soil was carefully removed from the head portion, disclosing that it was of even greater interest than its first appearance indicated.

… the outstanding features of this burial were the appurtenances that first wakened in me the deep interest in it, the armor-like cape composed of bits of shell and as of now, cleared of soil, displaying their sparkling iridescent surfaces turned out, and this creation in turn seemingly having been attached to the base of the skull of a swordfish, this skull having been divided longitudinally in the rear and opened so that it clasped each side of the back of the wearer’s head, the beak, some sixteen inches long, having projected obliquely upward and forward from above the forehead as the wearer stood upright. This beak when found was broken from the skull, and was also broken in one other place, not far from the tip…. but all the parts lay in sequence.

A remarkable feature of the swordfish skull was the eye orbit on the right side. The orbit had been greatly enlarged and was inlayed with shaped sections of shell, to form a most striking ellipse-shaped, iridescent ornament of the side of the wearer’s head. The center of this ellipse was a well-worked, plain ellipse of mother-of-pearl set in asphalt. Radiating from this center was a mosaic of other pieces of mother-of-pearl, each shaped much as were those of the cape attached below them…

When I described this amazing attire to Tehachipi George, a Santa Barbara Canalino, third removed, he nodded knowingly and said it was the regular regalia of the ‘Swordfish Dancer’ who did the dance in honor of the swordfish who brought his people whale meat in plenty….

An excerpt from David Banks Rogers’, “Prehistoric Man of the Santa Barbara Coast” (1929), in which he describes his find of the swordfish dancer:

“I had, at intervals, found the beaks of swordfish near the heads of male skeletons. Finally, I had good fortune to find on in place, protruding above and forward from the face of the skeleton; above and below the skull lay a thick sheet of overlapping triangular ornaments, shaped from the iridescent inner layer of abalone shell. Each of these pieces was pierced with one or more small holes , as though for attachment to some fabric or dressed skin. It was the most convincing picture imaginable.

The body that had lain here had been dressed to symbolize the swordfish, the scaly sides of the head and neck and the formidable sword being very suggestive. I am inclined to believe that this individual had, in life, danced the character of the swordfish, and, in death, had been put away in his ceremonial paraphernalia.

Traditions persist among the surviving remnants of kindred people, that the Canalino held this combative fish in great veneration, because it drove ashore or killed the whales that contributed so largely to the food supply of this people. It is probable that, in our dancer, we have an individual who had done homage to the benefactor of his people.”

Taken together, the dance and art reflect the significant role swordfish played in the maritime culture’s rituals, aside from serving as food and raw materials for the crafting of numerous utilitarian goods such as cups made from vertebra.

The swordfish depicted as negative space.

Swordfish Cave is located in the vicinity of Point Conception in Santa Barbara County, a geographical location held sacred by many Chumash people past and present as the historic site of a shrine to the dead and a point through which the deceased pass on to the afterworld. (However, in the interest in being as accurate and true to the Chumash people as possible, it should perhaps be noted that Point Conception is often erroneously labeled decisively as the so-called “Western Gate” in traditional Chumash lore. While there is a factual basis to this idea surrounding Point Conception, and it stems from genuine Chumash belief among some, the term “Western Gate” is a manufactured label that was popularized in the late twentieth century. The matter is often oversimplified and it’s incorrectly suggested if not stated positively that the point was the only such site as believed by all Chumash people, which, based on the notes of John P. Harrington, was clearly not the case.)

The following text is taken verbatim from a reader board posted at Swordfish Cave:

“Human occupation at Swordfish Cave  began 3,500 years ago, shortly after the cave formed and when the bedrock floor was still exposed. From that time until about 2,700 years ago, the ancestral Chumash periodically used the cave as a campsite while hunting and gathering. Small mammals such as cottontail rabbits and ground squirrels were an important source of food. Early cave occupants created a bedrock mortar in the cave floor for grinding plant foods—the mortar is currently visible in the cave floor.

Petroglyphs (carvings in the rocks) were created during these occupations between 3,500 and 2,700 years ago, and it is likely that some pictographs (paintings) were also created during that period. Swordfish Cave contains the earliest known rock art along California’s Central Coast.

The ancestral Chumash society changed around 2,700 years ago. A religious system in which religious specialists (shamans) were distinguished from political leaders was instituted. Swordfish Cave was not used as a campsite for the next 2,500 years, as it was apparently reserved for ceremonial and religious purposes. Petroglyphs were not created during this period, although it is possible that pictographs were.

Mission la Purisima Conception was established in Lompoc in 1787, dramatically changing the Chumash lifeways. Nearly the entire local Chumash population was under control of the mission, but missionaries were unable to feed the Chumash neophytes year-round. Consequently, they periodically turned to hunting and gathering. Swordfish Cave was used as a campsite for the last time between A.D. 1787 and 1804, when some Chumash people reverted to a lifestyle similar to that between 3,500 and 2,700 years ago. This time, however, cave residents were eating larger animals, including cattle.

The prehistoric artwork at Swordfish Cave is diverse. Petroglyphs include horizontal and vertical incised lines in the cave walls; incised lines are even evident in the bedrock floor. Small drilled holes are also evident, typically in clusters. The larger holes around the mouth of the cave were created naturally, but some of these have been enhanced with paint. Pictographs include painted lines as well as anthropomorphic and zoomorphic figures, including a realistic rendition of a Swordfish. (Text by Clayton G. Lebow.)” 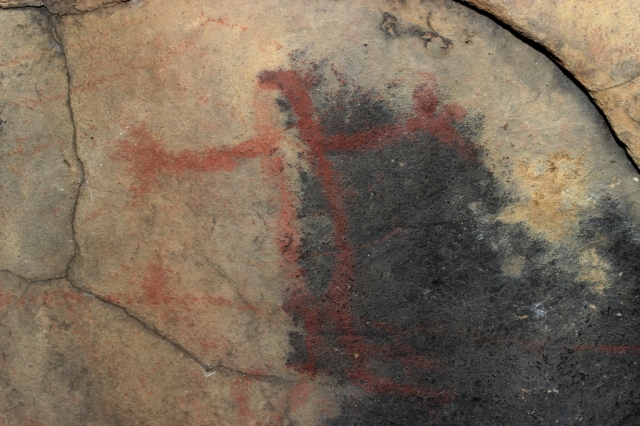 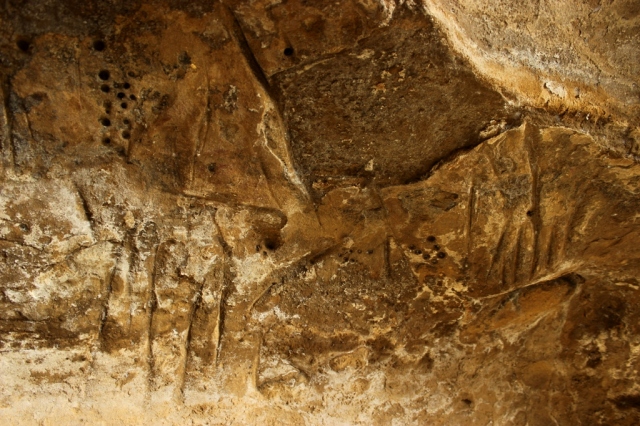