The Chumash pictograph panel at Arrowhead Springs. The arrowhead-shaped mineral stain surrounding the rock art points down to a spring issuing from under the boulder.

Last season’s county-wide rainfall totaled 46 percent of normal and the year before that it was 66 percent of normal. Not only has far less than normal precipitation fallen in the last three seasons, it has gotten drier each consecutive year.

Earlier this month it was reported that 80 percent of California was in “extreme drought.” Santa Barbara County is now experiencing even worse conditions and has reached the next official level, “exceptional drought.” In addition, it was also reported that from January through June, the vast majority of the county was unusually warm with “record high temperatures.”

One of several bedrock mortars at the spring site.

On a recent July visit to Arrowhead Springs Chumash rock art site, I found the spring no longer held standing water above soil level, but the ground was still damp. I was able to dig out a couple inches of gravel and water quickly filled the small hole.

Would a body be in need of a drink, the spring would provide in this exceptionally dry summer season. Though unlabeled on an official USGS map, and certainly not a perennial gusher, Arrowhead Springs appears to be a fairly reliable seep. The well-hidden shady spring with views of the Pacific Ocean and Santa Cruz Island was obviously of great value to some Chumash Indians for this reason.

The degree of severity of the current drought in California has not been seen in over 120 years, according to NOAA. It’s a good year to witness the nature of these exceptional times in the Los Padres National Forest, and to measure them against past experiences during  rainier years, and to see how the drought affects the land, its plants and animals.

A view of the seep at the base of the boulder, moist but no pooled water. 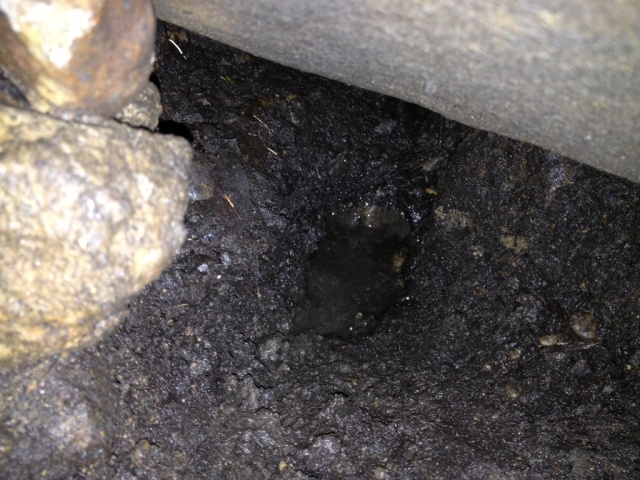 Reaching back under the boulder, digging out a couple of inches of sediment with a stick, the seep filled a small depression with water within seconds.