A barrier and “No Motor Vehicles” sign alongside West Camino Cielo at the old Goddard Campground site.

According to the old man, there was once a drive-up campground along the crest of West Camino Cielo, south of the road, called Goddard.

Today a few rusty barriers and signs testify to the fact that there was indeed something there at sometime.

North of the road, atop the mountain just above where the campground was located, a short trail leads into the forest and to the site of what was indeed, as per a USGS map from 1988, Goddard Picnic Ground.

Yet, in contacting the USFS I was unable to obtain confirmation or any information at all about either the campground or picnic ground. The people I spoke with had never heard of Goddard.

Clint Elliott remembering (sorta) Goddard as it was:

“Oh do I have some fond memories of Goddard. As you know, when passing the cluster of mailboxes to your left as you make that right sweeping turn up past the huge boulder, you get an insight into the beauty of West Camino Cielo.

But the true majesty is when you finally break out of the chaparral on the rim and are treated to the sweeping vistas of Goleta, Santa Barbara and Campus Point almost directly below.

Goddard Campground was the jewel of West Camino Cielo. I spent many, many Friday and Saturday nights up there partying.  Sometimes just for a few hours before heading back down into town and out to Isla Vista or staying until the wee hours of the morning. It was a spectacular place to party—unbelievable place to drop acid or mescalin on a summer evening.

You can just imagine how mystic it was on a warm night when the Santa Ana winds were blowing. Eighty some degrees at 2:00 a.m. and the city lights twinkling below like a jewel encrusted serpent hugging the coast.

It was very popular back when I was in high school. During the week the word would spread about a party up at Goddard and everyone would get so pumped and start preparing all their favorite party favors, lining up dates with the cuties, passing the hat for a keg, tracking down some hash—you get the picture.

Obviously most of my fondest memories revolve around these hedonistic adventures. There is no more spectacular setting than Goddard for a Bohemian night around the camp fire.”

Hat tip to Craig R. Carey for providing the following excerpt from the campground guide authored by Bob Burtness (1963 edition), which describes the now defunct Goddard Camp as follows:

Overlooking the coast and Channel Islands, Goddard Public Camp features the following: 1 double pit toilet, 1 garbage pit, 3 klamath stoves, 1 barbecue pit, 5 tables, 1 entrance sign, and 1 bulletin board. Situated at 2,500 feet elevation, the camp is open all year, but there is no nearby water supply. Goddard can be reached by Camino Cielo, just off Highway 150 (sic). The 1.2 mile stretch into camp is mostly paved, though sometimes narrow and winding. Total distance from Santa Barbara is 15 miles; and from Santa Maria and Lompoc, 55 miles.

This camp was part of a 40 acre parcel, deeded to the U.S. Forest Service for recreational purposes. The donor, a Mr. Goddard, was a prominent member of a Buddhist colony in the area. Yogi was also practiced there at one time.”

The hilltop where Goddard Picnic Ground was located.

Remnants of the old picnic grounds. 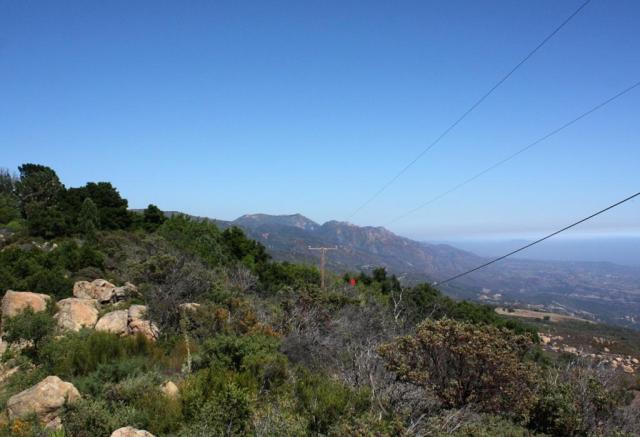 The flat under the oaks where Goddard Camp once existed.

There are numerous dates carved into the sandstone at the lower Goddard site, such as the header photo showing “1977” and this marking here which appears to have once read “1962.” 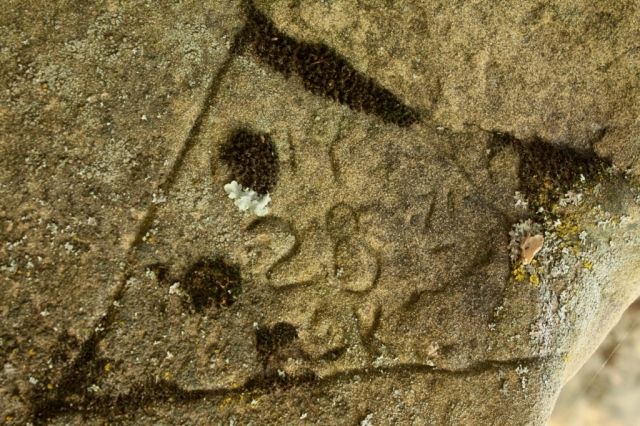 The view from Goddard overlooking Goleta and the Pacific Ocean with Santa Cruz Island in the distance.

This entry was posted in Santa Barbara. Bookmark the permalink.