Wild mustard in bloom within the Ventura River Preserve.

I lay on my back aside El Nido Meadow, sprawled across a trailside bench in the dappled light filtering through the oak tree canopy. Staring up at a patch of blue sky framed by bushy green oak branches, I listen to the chorus of bird songs filling the shallow canyon, and watch the branches overhead bounce in the light afternoon breeze. My backpack and a water bottle sit at the foot of the bench.

A human voice interrupts the solitude. My attention is refocused on the voice as it slowly grows louder coming up the trail along the creek. I guess that it’s a small group of walkers out for a stroll before hearing the rhythmic clip-clop of horse hoofs on the packed dirt. I’m not paying attention to what is being said, but just listening to the approach of whoever it is loudly making their way up the trail toward me.

As the talkative lady approaches her words begin to register. She is telling her friend about her relationship with another person. I could have cared less, I wasn’t trying to listen with any interest, but it wasn’t like I could avoid hearing the conversation. Then she veers into quite an unsuspected, very personal topic. 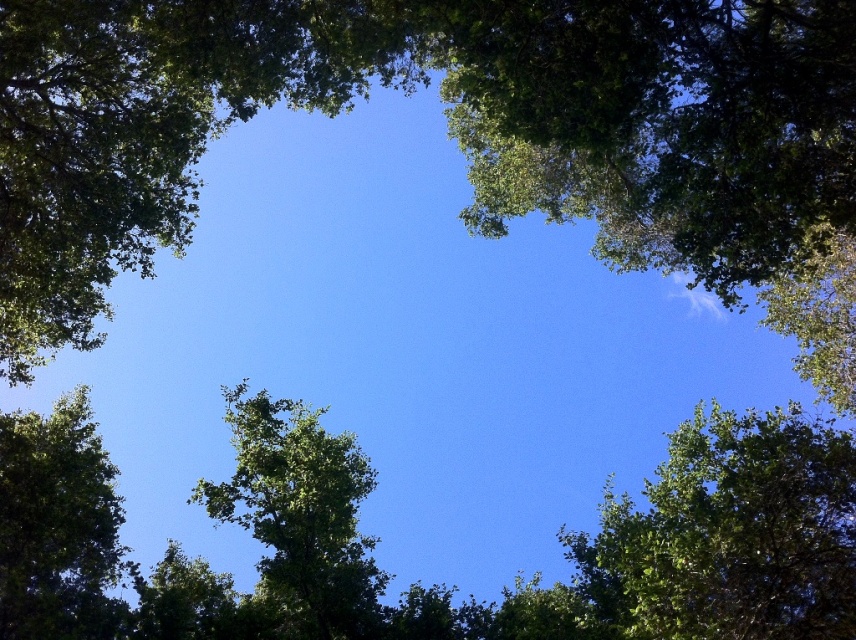 “We have sex and it’s fun, you know,” she says having no idea that I’m laying on the bench within earshot. Whoa! I think, surprised at what I just heard before considering what was said. Well that doesn’t sound very convincing, I think. “It’s fun, you know” isn’t exactly a rave review. “He’s a really sexy dancer,” she adds trying to pad the guy’s extracurricular resume before continuing her previous thought. “But he just doesn’t have the drive.” Doh! Yep, somebody ain’t makin’ the cut.

“Oh! Hello there,” she says in surprise as she finally sees me. She wasn’t actually talking to me. It was more a nervous reaction than a greeting, like a feigned laugh in response to an uncomfortable question. “Well, he looks tired,” she continues and mutters something else to her friend as they pass by obviously embarrassed. I lay still continuing to look skyward, relaxed on the bench about fifteen feet from the trail, as if sleeping and they weren’t even there.

I thought of making a friendly comment to acknowledge the embarrassing yet somewhat comical situation, but refrained. I didn’t want to turn an already awkward moment into something bizarre, or even creepy, with a failed attempt at humor in my effort to ease the uncomfortable situation. I decided that a lone dude lying around in the woods rising from a bench to comment on two lady’s conversation about sex wasn’t a wise idea. A thought my wife confirmed as accurate later that afternoon when I recounted the story to her. I lay hidden in plain sight behind my sunglasses and hat as they passed on by and left me to continue my lounging. As their voices faded the canyon once more filled with bird song.