The negative low tides of winter offer a great chance to get the kids out on the beach exploring tide pools and instill in them a curiosity and appreciation for the natural world that might last a lifetime, as was the case for me. The marine environment, after all, is yet another wilderness. When they grow old enough I’ll have the three of them out in the water free diving the submarine forests of giant kelp, which I think are far more spectacular than those forests on land.

As a boy I spent many, many hours and long days at the beach, which typically occurred at Summerland, a tiny town just south of Santa Barbara, because my mom was somewhat of a hippie and back in those days it was a nude beach. Sometimes we went to More Mesa beach. We would arrive in the a.m. hours like nomads hauling our supplies and leave in the late afternoon. Later, as an older boy without supervision, I would get dropped off at “The Pit” or Arroyo Burro beach as well as Campus Point.

My cousin and I would ramble up and down the Summerland seashore playing about when we weren’t out in the water boogieboarding. There was a natural freshwater seep below the railroad tracks down there which filled a small mucky but clear and deep puddle, which was always a favorite attraction. A few goldfish lived in it for a time which somebody had tossed in the tiny pool.

Exploring the base of the prominent landmark cliff around Loon Point in Summerland, we discovered a large deposit of old abalone shells scattered about. I have for years wanted to check back to see if I could relocate it, but haven’t gotten around to it. I’m not sure who dumped them or why. They looked aged at the time, but I don’t think ancient, though who knows, I was young.

I’ve wondered recently if the shells were an Indian midden. Whatever period they came from it was a time, obviously, when abalone in California were still plentiful and harvested as a delicacy of the sea. Those times have long since passed, for the most part. The only experience I have with red abalones are seeing the numerous shells decorating the wall of an older friend’s house in Carpinteria, the mustachioed waterman, Mr. S.C.

So I’m left to scrounge California mussels, which, though being abundant and easily taken, have never been as coveted as abalones but are still pretty darn tasty.

The archaeological record as pieced together from middens found on San Miguel, the westernmost of the Santa Barbara Channel Islands, suggests mussels have been a valuable item in the human diet for at least 10,000 years. (Journal of Archaeological Science PDF)

The same midden evidence shows an apparently significant decrease in the size of mussels harvested as the shellfish are thought to have faced increased pressure from a burgeoning Native American population. Mussels were a highly valued food source. These days, by contrast, mussels commonly reach their full-sized potential because almost nobody eats them.

As I squat barefoot in a t-shirt and shorts in mid-winter among large boulders three to four feet high, plucking mussels from the seashore at low tide, I think of the Chumash village that was once located a few yards behind me. No doubt humanity has been harvesting the bivalve mollusks from this beach for a long time and I take pleasure in practicing an ancient, simple and slow activity amid the timelessness of the sea during a hurried era of otherwise supreme sophistication.

The rhythmic crash and roar of breaking surf serves as soundtrack along with the occasional cry from nearby gulls. The thick organic scent of exposed beach at low tide fills the air, as a glassy-eyed seal pokes its sleek head above the waterline peering at me in wonderment.

I have found numerous sandstone bowls, both remnant pieces and fully intact, at this location through the years, though never actually purposely looking for them. One cold winter dawn while donning my wetsuit to paddle out to surf here, on a high tide with exceptionally large swell pounding the shoreline, I noticed a significant amount of soil and rock had been stripped from the back-shore.

The tumbling of cobblestones was not just audible with each powerful sweep of foaming whitewater across the shoreline. I could also feel the rumble, the physical expression of energy carried through thousands of miles of open ocean from a far distant storm, which had transferred its power from the atmosphere to the sea, and that now exploded against the edge of the continent.

Understanding the possibility, I had cast my gaze around the immediate area in front of me and instantly spotted two different bowl halves lying wet and tumbled among the rocks, the edge of one still crusted with natural seep oil once used to attach a basket. After surfing for three hours or so I returned to shore and spotted yet another artifact as I unsuited, a fully intact bowl lying upright on the cobblestones.

Gathering mussels is fast and easy, but cleaning them is laborious. As I pull them from the rocks I toss them in a tide pool hoping to encourage them to crack their shells and disgorge any sand they hold inside. Gulls have begun perching atop nearby rocks jockeying for position and hoping for an easy meal.

Once I’ve collected enough for a meal I scrape each shell vigorously against a rock to remove the small barnacles, sea anemones and limpets (also edible) that cling to their shells, after which I toss them back into the tide pool.

Finishing the task in the fading glow of twilight I walk back up the canyon with my sack of fresh seafood, walking under the gnarled and leafless sycamore trees and the canopy of coast live oak, the silence of a waterless dry creek bed a notable testament to the current severe drought conditions in California. From the beach to the kitchen within an hour, it’s fresh dinner for the night.

(Author’s note: Mussels are quarantined each season due to the potential for poisoning from the consumption of marine biotoxins. Check with the California Department of Public Health for further information: Shellfish Information Line (800) 553-4133.) 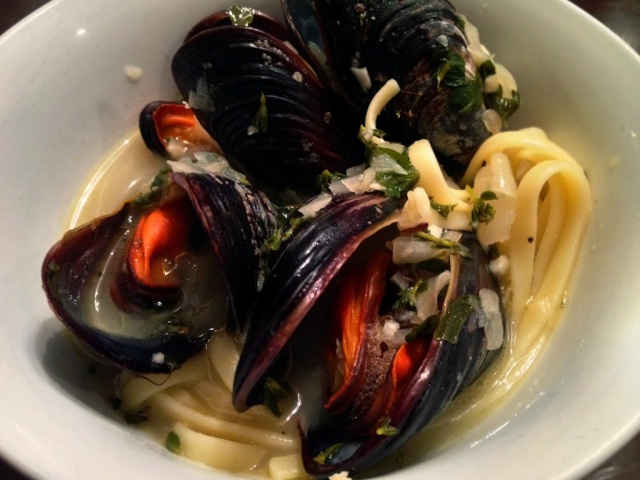