“Cabrillo’s description of the Chumash of the Santa Barbara mainland is the oldest ethnohistoric document concerning California Indians.”

Naturally occurring oil seeps have long been a defining feature of Santa Barbara County. In numerous locations, both on land and at sea, crude oil, or asphaltum, naturally oozes from the earth.

Being born in Santa Barbara, and spending a significant amount of time at various local beaches throughout my childhood, I grew to love the endemic fragrance of crude oil wafting in the beach breeze. Similar to a 21 year old that drinks themselves into a sickly stupor on their birthday, and for weeks afterwards cringes at the smell of alcohol, the scent of raw crude oil triggers vivid memories for me. But pleasant feelings rather than stomach turning repulsion.

As one might sniff a flower for its pleasing aroma, I love the sweet smell of crude oil. After travels through foreign lands, when I return to the California coast and catch its odor in the wind, I know I’m home.

Archaeological evidence indicates humans first began using oil from natural seeps in the Santa Barbara area around 5000 B.C. Several early Spanish explorers recorded numerous entries in their diaries about oil seeps, and their use by Chumash Indians in California.

A wood plank Chumash canoe, or “tomol,” caulked with a mix of pine pitch and asphaltum, called “yop” in their native language. The canoe was built in 1912 under the direction of 73 year old Fernando Librado Kitsepawit (b. 1839-1915), the last full-blooded island Chumash. The canoe is displayed at the Santa Barbara Natural History Museum.

In 1775, Spanish soldier Pedro Fages wrote of seeing asphaltum springs while exploring California. In San Luis Obispo County, near the old Spanish mission, he noted “as many as eight springs of a bitumen or thick black resin that the Indians call chapopote; it is used chiefly by them for caulking their small watercraft and tarring the vases and pitchers the women make for holding water.” Fages described the wood plank canoes built by the Chumash natives as being “. . .well joined and caulked, and of quite graceful lines.”

In 1772, the Spanish expedition through California led by Juan Bautista De Anza came across asphaltum oozing out of the ground and flowing into the ocean. Friar Pedro Font wrote of seeing “a good-sized spring of asphalt” near the base of what is today known as Conejo Grade along US freeway 101 in Ventura County. He also commented on the craftsmanship of Chumash plank canoes:

“They are very carefully made of several planks, which they work with no other tools than their shells and flints. They join them at the seams by sewing them with very strong thread and fit the joints with pitch by which they are made very strong and secure.” 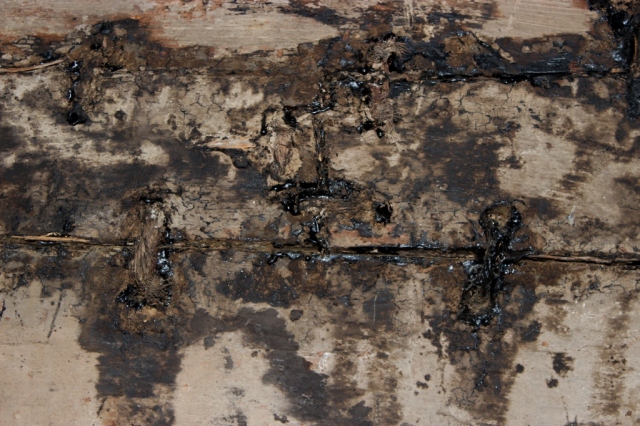 A close up view of the asphaltum and plant fiber used to seal and caulk the Chumash wood plank canoe at the Santa Barbara Natural History Museum.

Oil stained stone caulking tools used by the Chumash in the crafting of canoes. The wood planks were hewed with stone adzes and sanded with shark skin.

Historical marker in Carpinteria, California at a towering, old sycamore tree a short walk from the oil seep featured in the video below.

A mural depicting Cabrillo meeting the Chumash, as seen inside the Santa Barbara courthouse.

Some two hundred years earlier, Portuguese explorer Juan Rodriguez Cabrillo, sailing under the Spanish Crown, had recorded a similar account of the Chumash building canoes at the village of Mishopshnow. In 1542, the expedition he led witnessed the Indians using asphaltum from nearby seeps to caulk their canoes, and Cabrillo subsequently used it himself for similar purposes on two of his caravels.

In addition to using asphaltum for sealing their seagoing canoes, the Chumash used the naturally occurring crude oil for a wide variety of decorative and practical purposes. The black viscous substance was used to waterproof water jugs made from plants and to make basket hopper mortars, whereby a bottomless basket was attached to a stone mortar base using asphaltum.

Beads made of shell glued to animal bone using asphaltum. 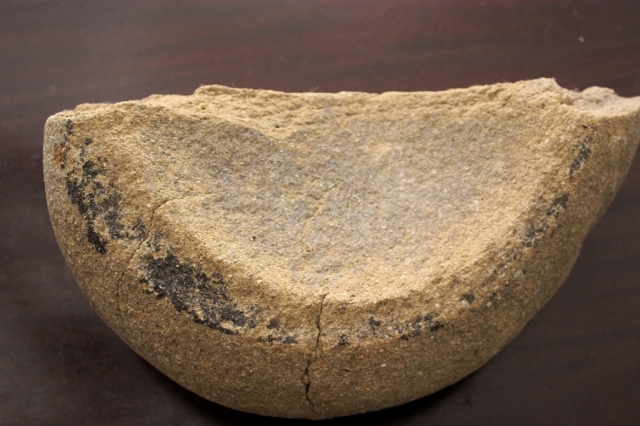 A remnant half of a basket hopper mortar with the faint black stain of asphaltum still visible around its edge.

At Carpinteria State Beach, a few minutes walk from the historic location of Mishopshnow, oil flows freely from the ground and onto the seashore. Long after the Chumash first collected the asphaltum, Americans began recovering it from the same deposits and used it to pave some of the first streets in San Francisco and Santa Barbara. The same sort of crude oil springs once used by the Chumash to waterproof their renowned tomols and later to develop American cities can still be seen today.

The Anza Expedition of 1775-1776: Diary of chaplain Fray Pedro Font