The Mighty Chanterelle and the Gnarly Oak 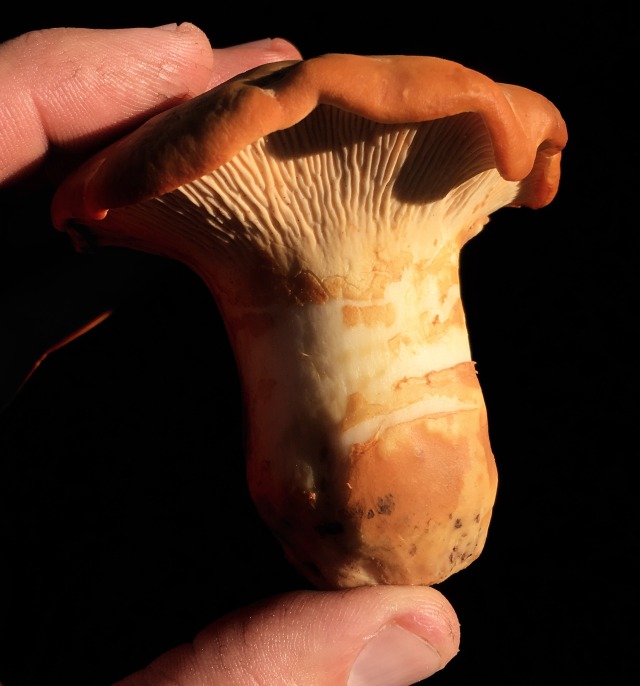 “In an oak forest alone, more than a hundred different species of fungi may be present in different parts of the roots of the same tree. From the oak’s point of view, this is a very practical arrangement.”

Chanterelle mushrooms are the fruit or reproductive structures of a fungus that grows on the roots of living trees.

The fungus and trees coexist in a symbiotic relationship, both benefiting by gaining sustenance from each other that they could not otherwise get on their own, alone.

In Santa Barbara County chanterelles typically partner with oak trees and the fungus plays an essential role in the health of a forest.

The better the fungal connection is the healthier the oaks are. As fungi disappear, the trees are weakened.

Most plants, from grasses to scrub to trees, grow with fungi in such interdependent relationships and plants in league with fungi contain much greater levels of nutrients like nitrogen and phosphorous than those plants without fungal partners.

Michael Phillips, in his award winning book about growing fruit trees, “The Holistic Orchard,” spends a significant amount of time explaining the critical importance of encouraging and tending what he calls the “fungal duff” zone around the base of trees.

Phillips advises feeding the soil fungi through regular spray applications of neem oil and liquid fish, as well as the routine application of ramial wood chips from deciduous trees (rather than evergreen) that are dumped in irregular haphazard patches around fruit trees throughout the year.

The healthier and more diverse the community of fungi are in the rhizosphere or root zone of an orchard, the healthier the trees are and the better their ability to defend against insect attacks and disease and to consistently produce abundant, tasty fruit. 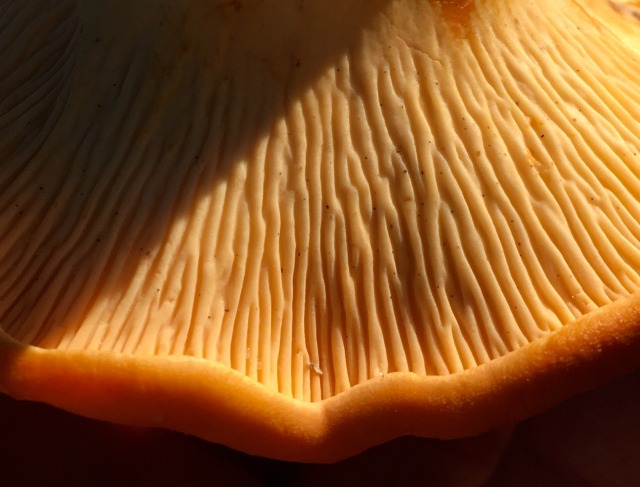 When the chanterelle fungus taps into the oak’s roots, the tree gets plugged in to the expansive subterranean network established by the fungus through its mass of root-like hyphae called mycelium.

These minuscule root-like filaments spread through the soil in an extremely fine meshed webbing, soaking up nutrients and moisture otherwise out of reach or unavailable to the much larger tree roots.

The amount of these fungal filaments in healthy forest soil is hard if not impossible to imagine.

In a single teaspoon of soil there are many miles of hyphae.

In a meter diameter of soil, about the space between two spread arms, more than eight trillion end branches can occur in the mycelium.

The mycelium greatly increases the surface area of the oak tree’s own root system, but it also serves as a conduit for nutrient exchange between trees.

Within a well-connected forest, stronger trees aid weaker or sickly neighboring trees or juveniles and saplings in their shadows by transferring vital nutrients and water through the fungal network. 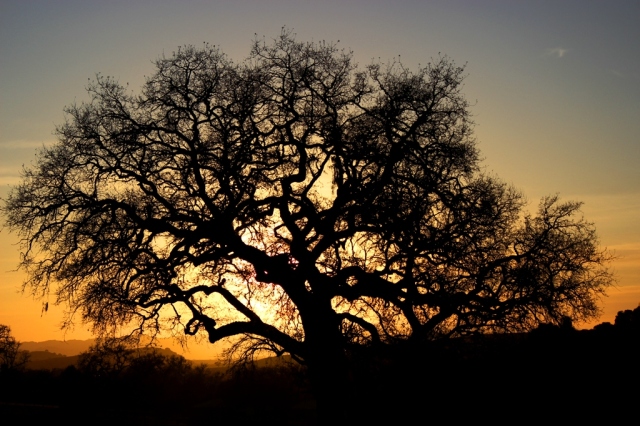 A valley oak in the Santa Ynez Valley.

An oak tree does not just gain food and drink from the helpful chanterelle, however.

The symbiotic connection also enables the tree to communicate with other trees through the subterranean fungal network that functions as a natural sort of fiber optic system.

When mycelium run through the soil they connect with other mycelium growing from the roots of other nearby trees, thus linking one tree to another to another.

These fungal networks can be vast and large swaths of a forest may be connected in this manner.

A specimen of honey fungus found in Switzerland is thought to be around 1,000 years old and covers 120 acres.

In Oregon, one fungus is thought to be at least 2,400 years old and covers  some 2,000 acres and is three miles wide; it’s  said to be the largest organism on the planet and can be spotted from an airplane.

These impulses can travel a third of an inch per second to notify neighboring trees about potential threats like insects or relate information about drought.

In the case of an insect attack, each oak tree connected to the network receives news of an imminent threat from trees already being eaten by bugs, and each tree then responds to the message defensively by boosting their output of toxic and bitter tasting tannins into their bark and leaves.

Lone trees not plugged into the network not only lack access to the communal plumbing that supplies additional food and water, but are also incommunicado and completely unaware of what’s happening in the forest around them. Loners live much shorter lives than community members, as a result.

When in the forest next time around, ponder what it is you may be walking atop. There’s a lot going on under your feet.

5 Responses to The Mighty Chanterelle and the Gnarly Oak