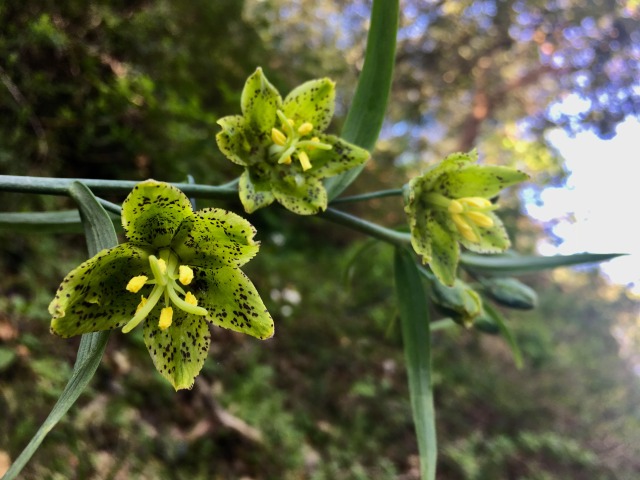 Earlier this year in March, out scampering around in the Los Padres National Forest, I stumbled across a rather impressive stand of a rare wildflower, Fritillaria ojaiensis or the Ojai Fritillaria lily.

I had previously noted this Seldom Seen Slim of Santa Barbara County wildflowers on this here blog in 2015: Fritillaria Ojaiensis, Rare Wildflower.

The U.S. Forest Service describes this plant as being “critically imperiled.” I wonder why it’s so imperiled.

I assume habitat loss is one problem, which seems to be the ever increasing problem for much of the nation’s wildlife.

I’m going out on a limb here, admittedly, in further pondering the issue based on this assumption, but I wonder if the loss and absence of Native American forest management practices or what is often called “traditional ecological knowledge” has played a role in this flower becoming critically imperiled and rare.

This may be seen as rank speculation, but I’m not advancing a theory, and this weblog is an open journal of sorts where I ponder my surroundings, and so the following might better be seen as merely the inner workings of one man’s mind in response to what he reads and what he experiences in nature. Something like this here other post: Mastodon & Mammoth Sign: Reading Trees in the Santa Ynez Mountains

California at the time of Euro-American contact was a blooming garden of sustained abundance brought about not just by nature alone, as is commonly believed, but encouraged and fostered and cared for by many generations of Indians through thousands of years. (Anderson)

California was a botanical wonderland prior to Euro-American contact not because it was a so-called pristine “wilderness” that was unmolested by humanity, but because California’s original or native human inhabitants made it so by their own hand. And fire was their favored tool of choice.

“Fire was the most significant, effective, efficient, and widely employed vegetation management tool of the California Indian tribes,” M. Kat Anderson writes in “Tending the Wild: Native American Knowledge and the Management of California’s Natural Resources.”

Native burning practices tended to maintain a clear understory beneath the canopy of oak woodland, which is precisely where the Ojai Fritillaria lily seems to like growing.

The forests of California prior to Euro-American contact were far more open and park-like in their character than what we see today, because for hundreds if not thousands of years, Natives had routinely burned the land with light intensity blazes every few years to remove dead forest litter, thick brush, senescent growth and to encourage the sprouting of fresh crops of culturally important plants.

After wildfires like the Day in 2006 and the Zaca in 2007, we read stories of the Forest Service hunting out Chumash rock art sites deep in the Santa Barbara backcountry that had previously been concealed by thick chaparral and we see headlines such as, “Long-hidden sites emerge as archaeologists explore burned-out Santa Barbara County backcountry.” Local outdoor adventure scribe, Chuck Graham, writes in Noozhawk:

“The fires have exposed long-hidden rock art where old, concealed trails lead to previous sites unseen. … Most of the old trails exposed are those of Native Americans.”

Well, an inquisitive mind might wonder why were those important sites covered in dense impenetrable forest today before the fire, but were obviously open for travel in prehistoric times.

Fire is the probable answer. But not lightning because it did not strike often enough. And the Chumash likely were not out pruning trails. Anderson cites Native American Rosalie Bethel, North Fork Mono, on the use of Native fire:

“They burned around the camping grounds where they lived and around where they gathered. They also cleared pathways between camps.”

“One can discern how different the vegetation was when Indians were the sole inhabitants by walking the land after a catastrophic fire. Old village sites reappear where impenetrable chaparral lay before the fire. Sandstone cave areas with indigenous pictographs are exposed after coastal scrub is burned back by wildfires.”

When the use of fire was prohibited by Americans some time ago and the focus became fire suppression, as carried out by the US government at a military-industrial scale to snuff out all wildfire, natural and anthropogenic, the forest began to close in, biodiversity tended to waned, homogeneity tended to increase, and the botanical composition of the land or habitat was radically altered.

“Fire in natural, as in cultural, systems is as effective an agent by being withheld as by being applied,” Stephen Pyne writes in “Fire In America: A Cultural History of Wildland and Rural Fire.”

“In many environments fire, anthropogenic or natural is the controlling agent of ecological dynamics, exerting an inordinate influence on the composition of flora and fauna, on their historical arrangements, and on their contemporary energetics.”

Pyne on the drastic change to the land brought about by Native fire:

“So extensive were the cumulative effects of these modifications that it may be said that the general consequence of Indian occupation of the New World was to replace forested land with grassland or savannah, or, where the forest persisted, to open it up and free it from underbrush.”

Local ethnographer, Jan Timbrook, and John R. Johnson and David D. Earle on the use of fire by the Chumash in Santa Barbara County:

“It seems likely that the Santa Barbara coast in pre-European times was dominated by grassland and oak savanna. … Indian burning may also have been an important factor in maintaining the openness of oak savanna in coastal areas.

The absence of Native fire from the land for so long and policies of fire suppression have had profound consequences.

“The hands-off approach to management of wilderness preserves,” writes Anderson, “is jeopardizing the long-term stability of many plant communities.”

And so it is that I wonder about the Ojai Fritillaria lily’s critically imperiled state.

This season I “discovered” a stand of no less than 66 individual plants growing in the Santa Ynez Mountains along the headwaters of a creek draining the north slope of the range.

That’s the number at which point I stopped counting, surely there are more growing at this specific site and I imagine many more as well at other sites in the same canyon lower in the watershed.

About two thirds of the plants were in active bloom while the remainder were showing only a leaf or two and had not yet reached florescence.

It was a nice find growing under the canopy of an oak woodland where the understory was notably open and free of brush.

The plants were growing in habitat that I imagine would have been far more prevalent in prehistoric times when the land was under Native American management.

And so it is I wonder about the Ojai Fritillaria lily’s critically imperiled state.