No trail leads there. A careless body could fall along the way and be bloodied up, break a bone, die busted and splattered across the sharp angular stones of canyon rip-rap and jumbled boulders and bedrock slabs.

Such has happened in the canyons of Santa Barbara County. People perish here hiking in the Los Padres National Forest.

Walking a ridgeline on a different approach during a subsequent visit proved no less precipitous.

I get soft and fuzzy headed in unstable high places these days. I felt the pull of the void.

I imagined myself loosing traction on the descent and tumbling rag doll head over heals into the canyon’s stony toothed maw.

With luck, maybe, I could have saved myself by glissading the slope on my rear end, trekking poles for stability, but at that steep angle, gravel working like ball bearings, the speed might have been unmanageable.

This place still remains difficult to reach, today, and the strain in getting there impresses upon me how remote it must have been for people in prehistoric yesteryears.

Later, back home, I would ponder with amusement the fact that those people came to this place adorned in finely crafted jewelry. If the tiny cylindrical bead found there was any indication.

Sweating profusely, red and steamy, hot and thirsty and dusty and dirty, hauling a pack with liters of water and calories, pushing and pulling and holding myself in place aside the mountain slope with trekking poles, feet wrapped in protective coverings, covered head to toe in the burly synthetic fiber toughskins of outdoor adventure clothing made to withstand the abrasive brush and rock; I busted my hind end it to get there.

This place where they once hung out so well-adorned and nearly naked by comparison.

The contradistinction between us seemed ludicrous.

I hauled myself up the acclivity, lumbering through the geologic wrack, dragging my body, that suit I came in that now felt like a sack of molten lead.

I didn’t know where I was headed.

I had no destination. 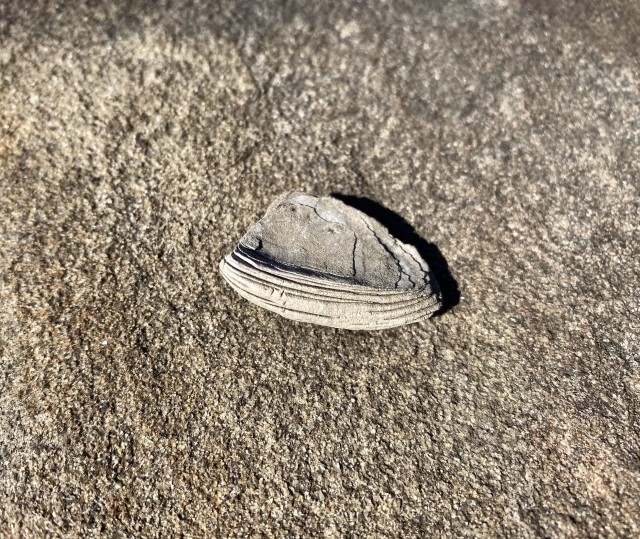 Once in awhile the forest yields riches to fortunate souls whom invest time immersed in the other world out there, outside the metropolis, across the fence lines, beyond the end of the road, down the trail and into the wild.

Sometimes the wealth earned is abstract and metaphysical, something that happens in your head when you’re out there.

“Myself, crouched in this cave,” Craig Childs writes in Soul of Nowhere, “I am hoping to become the same, a person who is changed by the land, who puts a pen to paper and tells what I have seen.”

On other occasions, the woods may reveal  something physical to the keen observer and wanderer of wilder places.

I hear murmurs of an extraordinary Native American zoomorphic stone artifact, possibly a cetacean, recently found in a certain canyon above Montecito, revealed after the catastrophic and deadly Montecito Debris Flow of 2018, discovered by a lady out for a hike in one of the most popular canyons in the Santa Barbara frontcountry.

That earth churns and old buried treasures turn up from the dirt may not be surprising.

People have lived around these parts for over 13,000 years (Arlington Spring Man). Some artifacts are found over twenty feet deep in the ground.

But to stumble on a landed artifact several weeks ago myself, sitting around above ground for innumerable years, surprised me.

In the land of lower California in 2020 crawling with millions of people, hidden treasures and secret places still remain in our remnant wildlands.

What a fantastic revelation!

On a hike in late January I discovered a cupule boulder I did not know existed and that was unmentioned in the literature.

“That is a surprise,” he said, the well-known published expert I consulted and whom was unaware of the site.

He suggested I notify John Johnson, Curator of Anthropology at the Santa Barbara Museum of Natural History.

Located high in the mountains, this place offers an incredible view over the land spread out far below.

I was stunned! when I made it over the last steep slope and emerged from the trickling creek and I stood straight again and walked instead of clambered and I saw how the forest floor fell out before me into a gulf of open air with a long view over the land below as far as the clarity of the air allowed framed on either side by plummeting ridgelines.

I marveled at my surroundings. I weaved a slow uncertain line across this remarkable promontory, struck by its incredible geography that so pleasured my mind.

This place, for its view and geography, is something like the Knapp’s Castle site in Santa Barbara County.

See the faint circular depression surrounding the hole? Is it natural or human-made?

The Chumash long ago discovered all the finest nooks and crannies of the forest or perhaps they inherited them from the Hunting People and the earlier Oak Grove People or whomever.

The places of long views, eccentric and useful rock formations, peaks and valleys and fields and streams and seeps and springs and deep pools and natural stone tanks and tinajas and the differing neighborhoods of various plants and the collections of animals drawn to them.

There is a true story of a deer hunter finding two Chumash bows and a bundle of about 20 or so arrows inside a dry cave in Santa Barbara County in the late 1950s.

The cave is located in a canyon in and around which the modern deer population (circa 1965) had been found to be among the densest in the county.

The old Chumash knew these things by necessity. I struggle mentally and physically to learn what had long ago already been known about this land and then lost.

I recall as a boy driving into this canyon and on a grassy slope beside the dirt road I spied deer antlers through the truck window.

I remember having been rather impressed with the size, and that George, my friend Willy’s dad, pulled rank and ended up taking them much to my disappointment. I wanted the antlers. My boyhood bedroom resembled a museum with shelves burdened with collections of bric-a-brac.

It rained hard on that trip to the house in Peachtree Canyon. We ended up having to hike out in the rain on the sloppy and tacky dirt road with its burdensome heavy mud that stuck to our shoes and made adobe bricks of our feet.

I walked along admiring this high mountain promontory and the view therefrom on an immaculate winter’s day.

I came to a short and flat tabletop boulder, about waist high, and upon it a roundish area appeared worn.

This brought to mind the sort of grinding slicks seen on granite in the desert and in the Sierra that were once used to process seeds or nuts or whatever.

But the wear was subtle enough to remain unclear and the bottom of the bowling depression seemed too rough to have been used. Maybe the rain had made it.

One day the bottom of the depression, worn by sitting water, might be perfectly flat like a miniature dry lake and smooth and hold gallons of water, a tank. I found several such tanks on this day, all dry in this once again droughty winter.

I ran my fingers over the roundish area on the flat boulder, and moseyed on, aimless as usual, so often aimless out there.

I stepped at a slow pace around another much larger boulder and it seemed as though something inside my head told me to look down and when I did there before me lay a small artifact of white chipped stone in a crescent shape.

I stood still, looking at the telltale bit of stone, mentally feasting upon the intellectual meal I had just discovered. People had been here a long time ago.

The artifact appeared to be the back end of an arrowhead protruding from the earth.

Still standing, I could see notches in the stone once used to haft the projectile point to an arrow shaft or so it appeared.

But when I knelt and first picked up the artifact some forty-five minutes later its form differed from the projectile point I had in mind.

I turned the small piece over in my hand and I was surprised to see that it was not a broken half of an arrowhead. The break was not a break, but in fact a finished edge.

Later when I showed it to my young daughter the first thing she said was that it looked like a bear. I hadn’t seen it at first, myself, but when mentioned the resemblance was remarkable and unmistakable, though perhaps coincidental.

Some time after that first artifact, one of many of different sorts found in addition to bone and seashell fragments, I used a tree to hoist myself atop a boulder.

On top of the boulder, in a natural depression, I found some 30 or more cupules.

In another boulder a stone’s throw away and nearer the edge of a cliff I found a single mortar.

Between the mortar stone and the cupule boulder, some person or people had apparently spent much time knapping and crafting stone tools as evidenced by a concentration of light lithic scatter and numerous stone artifacts.

At the start of the day, as I began my hike, and later while dragging my body all over the mountain, I wondered what I was doing and why. I thought perhaps I had wasted my day rather than seizing it.

Why do I go to places where few people if anybody else at all ever bothers with?

I wondered if I had wasted my day, because I had no set destination, nothing planned to reach or achieve—no waterfall, no deep pool in the creek, no peak, no trail camp, no flowers, no foraging for mushrooms or other wild edibles and nothing labeled on any map.

And then I stumbled onto this archaeological site by happenstance.

Related Posts on this Blog:

The Los Padres Box of Chocolates