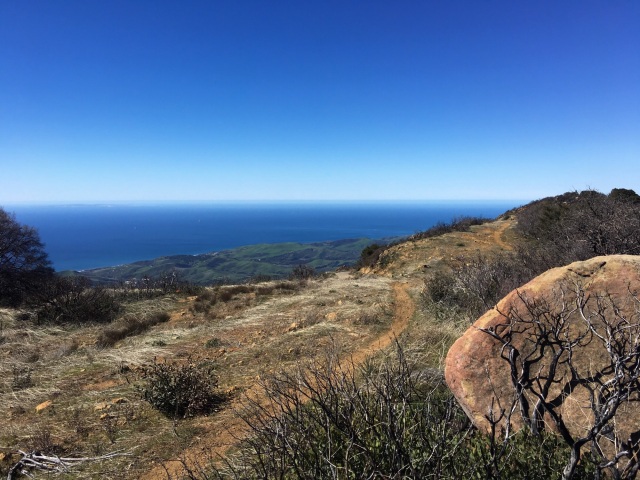 A view of the Pacific Ocean overlooking the Gaviota Coast from the crest of the Santa Ynez Mountains atop San Lucas Falls canyon.

San Lucas Falls is rarely visited and hardly ever seen by anybody despite being one of the better waterfalls in the Santa Ynez Mountains of Santa Barbara County.

There is no easy access by way of an official, US Forest Service sanctioned and maintained trail. There is no trail at all, so far as I know.

The gatekeeper has long been the impenetrable forest of chaparral that surrounds the waterfall, although I suppose an enterprising hiker may find his way there bootlegging it up a long stretch of a particular dirt road, which I believe is private property, however.

There is an old overgrown, slough-covered road cut that runs by the falls. 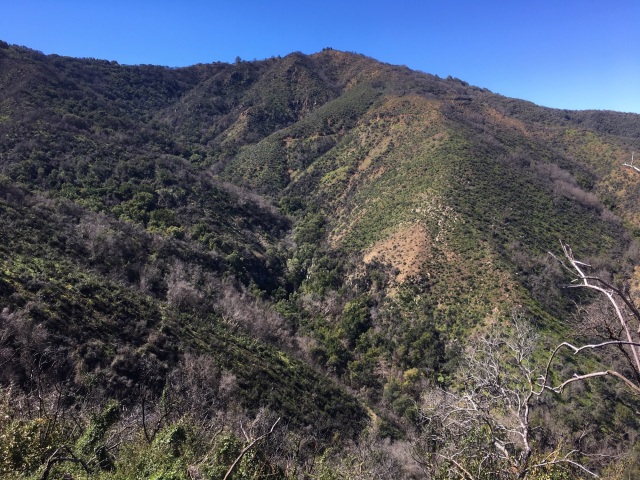 Some years ago I stumbled across the falls on a US Geological Survey map from several decades ago.

A thin blue line marked its location with the name beside it.

I had never heard of the waterfall.

I needed to see it, but could not locate a single image online.

Obviously the mountains were calling and I needed to go. I had to study the falls first hand, up close and personal.

But how to penetrate that impenetrable thicket that guarded the waterfall?

That was, for all but the most masochistic lunatics, not possible so far as I was concerned. Not even I, the lone weirdo wanderer of the woods and places of lesser interest, had an appetite for that sort of rough and bloody work.

It could take a body hours to move even just a mile. Something like Campbell Grant describes in his book, “Rock Paintings of the Chumash,” when on his way to a painted cave deep within the Santa Barbara backcountry.

“Carrying packs and cutting our way down a brush-choked arroyo with machetes,” Grant writes, “we made a mile in two hours.”

And once under scrub canopy a hiker is effectively lost, for all visible reckoning and route finding becomes extremely difficult if not impossible due to the thick cover of chaparral. You can’t see where you are nor where you need to go.

So San Lucas Falls lodged in my brain as a project to be done at some point. The years kept sliding by. 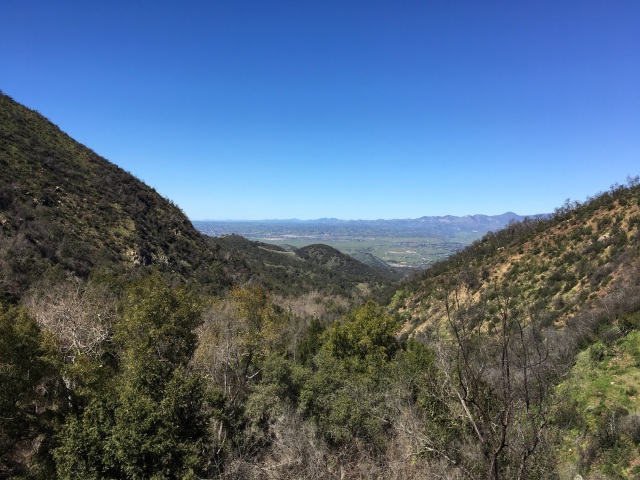 Looking down San Lucas Canyon toward the Santa Ynez Valley.

And then the Whittier wild fire swept through the area and thinned the forest just enough to offer a much easier, although still strenuous, passage.

And then two years later, right now, the winter finally brought a normal season of precipitation, which after seven or so years of drought seemed like a torrential deluge.

Every little runnel in the hills came back to life and flowed with gusto, while the major creeks once more roared and the Santa Ynez River, which San Lucas Creek flows into, raged high along its banks turbid, dangerous, swift and chilly.

This was the year to visit San Lucas Falls, while it was gushing, before the drought possibly continued, before the chaparral grew back, before the figurative doors were slammed shut once more for decades to come. 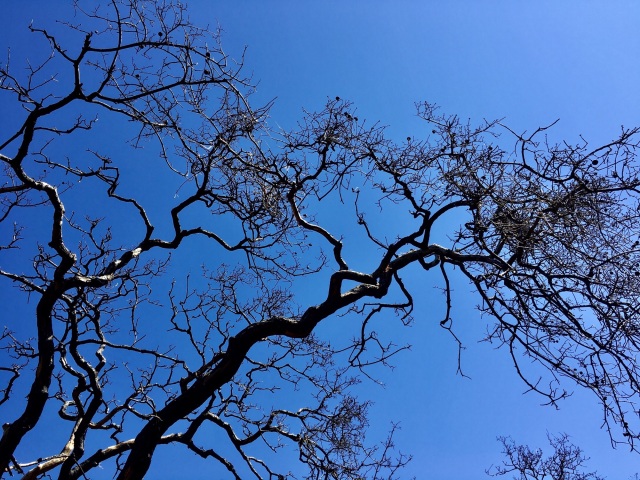 I hiked down the spine of a steep ridge just east of the waterfall, through the spotty patches of burned brush. The route was fairly open from the fire, but as you know forest fires do not burn evenly.

In several places I was forced to meander here and there through thickets of scorched but still standing brier, to retrace my steps and double back in search of openings, and in a few places resort to crawling.

The ridgeline falls steeply toward the Santa Ynez Valley in a series of stair steps, the backsides of which are not visible when hiking down into the canyon. From the valley floor these slopes appear closer to vertical than not.

I was not sure if each of the backsides of those stair-like graduated hilltops was burned clear or had been untouched by the blaze or merely just singed.

There was a good chance each of those backsides did not burn as they face northward on the north slope of the mountain range, and so tend to be wetter and greener and thus less susceptible to fire.

This translates logistically into standing atop highest of those stair steps on the ridge near the crest of the mountain and wondering, “If I hike 1,000 feet down to that far step which looks to provide the closest point of access into the creek, will the backside of that step be burned clear and easy to walk or did it not burn and is still shrouded in impenetrable brush?”

You have to make the call knowing you may get down there and find it impenetrable and then be forced to retrace your steps right back up the beastly steep slope to try and find another entry point.

This could consume a couple of hours of precious time and energy and leave you right where you started with nothing to show for it but dirt and charcoal stains, scratches and lots of sweat.

The bears around here, or “bars” as Abe Lincoln purportedly pronounced the word back when, have a funny habit of stepping right in the same foot prints every time they pass along their own trail. This results in rather deep and well-worn footprints like this one here.

There were two other possible entry points breaking off from higher up the ridge I was on, but the first and closest one led into the creek farther above the falls than I liked, which risked leaving me ledged up above the falls without any way to get down below for a looksee.

The second possible entry point appeared to end in a dense patch of brush that hadn’t burned and which was too far above the creek to want to bushwhack through.

But to determine if this was the case, I’d have to traverse along that hill quite some distance before being afforded a view down towards the creek to see if it had burned enough to get through.

If it hadn’t burned, then I’d have to retrace my trail back farther than I would have liked. So I wrote it off. 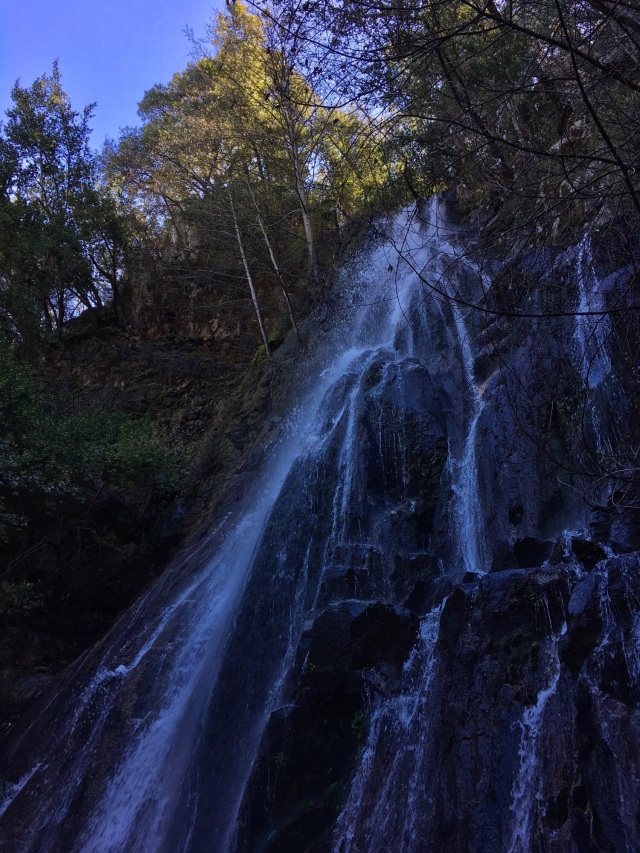 Therefore, I made the call to proceed down to that aforementioned third entry point, the lowest one, that offered possible access into the creek shortly below the waterfall.

Off I went, down, down, down chasing a possibility, pants, long sleeves, leather gloves, trekking poles.

Fortunately the fire had indeed burned down the backside of that last stair step and cleared out the dense scrub enough to allow relatively easy passage.

But I didn’t know this for sure until I was right down atop that earlier mentioned sloughed over road cut just above the creek and just below the falls.

The entire hike down the ridge I was going on a “maybe” regarding weather or not I’d actually have a chance at getting into the creek.

Fortunately I was able to find my way through with relative ease.

The water falls with much more force than might be suggested by these photos and it casts off quite a misty breeze.

San Lucas Falls is located at the confluence of two streams. What might be called the highest east and west fork of San Lucas Creek were it a more substantial drainage.

The waterfall is found on the east fork not many yards upstream from this confluence.

San Lucas is among the best waterfalls in the local range, not a mere cascade and in no way small.

I’m a terrible judge of height and distance, but I’d hazard a rough guess that it is a 70 foot waterfall give or take 10 feet or so. But it may well be much taller. I think it probably is taller, but I don’t want to hype it. From my last post you know I don’t appreciate hype. 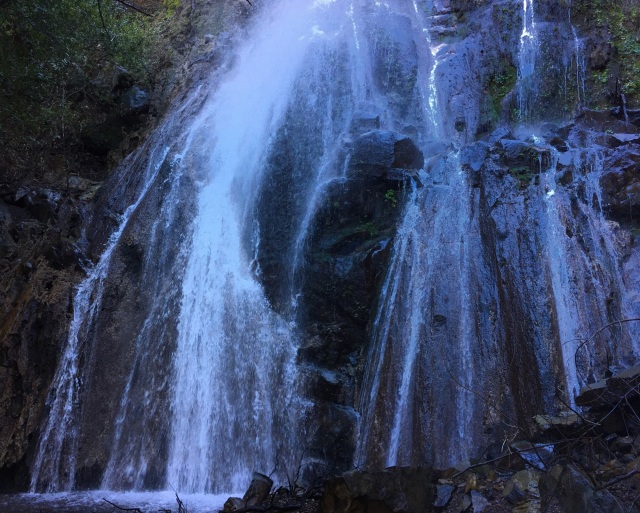 Whatever the case may be this waterfall gushes and roars. It doesn’t just trickle. But there is no plunge pool at its foot, just a very shallow slick of water over a gravel bed.

The whole canyon was loud with the sound of falling and running water when I was there.

New sprouts from seed of various scrub comprising chaparral were popping up all over the mountain burn scar in addition to the basal regrowth from established root systems of scorched bushes.

A normal amount of precipitation this season and a cooler winter that’s helped keep things wet seem to be setting the stage for a remarkable flush of new growth to fill out the forest that had been dying and shrinking in density and volume from the long drought.

The “west fork” of San Lucas Creek at the confluence showing a peek of the miniature “gorge.”

When we get a normal season of rainfall, it’s incredible how much water flows from the sandstone aquifer that are the rather short and stubby Santa Ynez Mountains.

The waterfall is difficult to get a decent view of because it is hemmed in and shrouded by tall trees.

This may be one reason why a trail was never cut to it; you can’t really see it from any distance and so it may be harder to appreciate than other more open falls.

The west fork of the creek at the falls cuts through a miniature gorge just above the confluence, which itself is a rather nifty place.

After the hike, I had pulled over on West Camino Cielo Road along a blind corner on the wrong side of the road to take a gander of the view from the top of the mountain.

Seeing a white truck rolling up behind me I waved it around signaling to the driver that it was clear to pass.

The driver stopped to hassle me for some damn reason. Understand that any interaction with another human when I’m out alone is a hassle for The Grouch of the Woods. It’s nothing personal.

He interrogated, er, asked me what I was doing, the door of his truck fashioned with some sort of official seal I guess I’m supposed to take seriously.

I told him I was just taking in the view, that I had just returned from a hike down to San Lucas Falls, that it was rough and rugged. I’m not sure he even knew what or where I was talking about.

“Well, so long as you can get in and out yourself,” he remarked and drove off.