They outlawed walking in the forest. They said it was too dangerous.

They told me it was “critical” that I didn’t walk in the woods for my “own safety” and that of others.

They said the conditions in other places of the world were exceptionally hot and dry and windy and very dangerous and that wildfires were burning in ways nobody alive had ever witnessed and more havoc would come and firefighters could not stop it.

And so they outlawed walking in the Santa Ynez Mountains in Santa Barbara. They said it was too dangerous.

In the days following the forest closure here hundreds of thousands of people elsewhere in California and Oregon found themselves under varying degrees of emergency evacuation orders. Thousands of structures and hundreds of homes burned and many people died and several people were arrested for setting fires.

They closed the entire Los Padres National Forest the day after temperatures reached 117 degrees in Santa Barbara County and many days after meteorologists had warned of the coming heat wave.

They closed the forest at 5 p.m. on Labor Day Monday. One hour before the end of the heat wave that broke records in some places.

“A bit late,” said another.

Cool fog filled the air the morning after they closed the forest.

I sat reading in the chill morning bundled in sweat pants and long sleeves and a beanie and I could hear falling drops of occult precipitation hitting the ground in that moist muffled quiet.

September is typically a hot month in Santa Barbara and for a few days it was, indeed, very hot. But now we had maritime fog like the seasonal phenomenon of May gray and June gloom.

The marine layer flowed in off the Pacific over the city and pooled against the Santa Ynez Mountains up and down the coast along the back of town.

Temperatures varied in the seventies and for the next week we woke to cool and moist foggy mornings that blurred into mild and calm afternoons.

The fog burned off each day to reveal a high ceiling of depthless gray of varying hues. We didn’t see blue in the sky again after the holiday.

For days smoke from distant fires covered the sky like high clouds. The sun shown through in that dread orangey-red hue that is the telltale sign of wildfire and the shadows on the ground took on a purplish opalescence.

The smoke settled in and smothered the town in an unhealthful gray-blue haze that lurked through the days and ebbed and flowed like the tide. 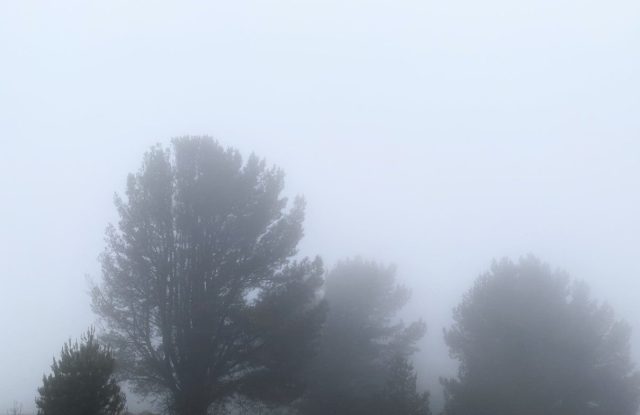 Society simmered like a cauldron on a bonfire of angst and fear and loathing, kindled and stoked by the fright and grief of the pandemic and the enormity of 190,000 dead with no end in sight and the flames fanned by a whirlwind of racial and political discord, protests and riots and arson and killings in the street and vandalism and the destruction of hundreds of private businesses.

A coming presidential election more divisive and contentious and fraught than any in living history fired the already simmering social pot to a roiling boil.

People were at each other’s throats.

The fire-lit city streets ran with blood and tears.

They outlawed sitting on a beach in Santa Barbara a few days before they outlawed walking in the forest. They said it was too dangerous.

On a sunny Labor Day weekend during a heat wave when it hit 117 degrees in the Santa Ynez Valley and a 100 degrees in Santa Barbara.

They said for my own safety and that of others, because of the novel coronavirus, it was critical that I not sit on the beach.

So I didn’t sit on the beach. I paced around as permitted, like other people, zombies traipsing aimless and lackluster up and down the shoreline.

Groups of people sat filling the chairs and tables gabbing away without masks at the seaside Boathouse restaurant behind me, right on the edge of the beach, just back from the sand.

I opened an umbrella on the sand near the waterline to shade a gallon of water while I swam with my wife and three children.

The ranger drove his 4×4 vehicle over and made me fold up the umbrella.

The sign posted in the sand explicitly outlawed umbrellas, the item mentioned by name, contraband.

The next day they outlawed walking in the forest. They said it was too dangerous. 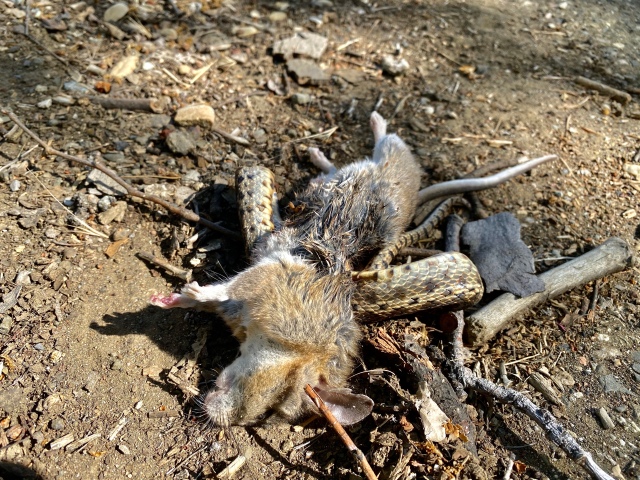 The snake appeared to have nabbed the rodent and then something (tire?) smashed both of them dead.

We sat at a dead stop each in our own truck facing in opposite directions in the middle of Paradise Road.

We looked at each other through our side windows over the painted line of the center divider.

I had just finished guzzling some water from a gallon container when the ranger pulled up.

“Hello. Are you aware of the forest closure?” she said finally.

“Sooo are you driving out of the canyon orrr. . .” she said trailing off.

I had been driving into the canyon.

“I don’t answer questions,” I said.

She said some more words.

Then she started in again with the questions.

“Where are you going?” she said.

“I don’t answer questions,” I said.

“You have no legal right to ask me anything and I’m under no obligation to tell you anything,” I said.

“Why are you asking where I’m going?” I said.

I was in my vehicle minding my own business. She drives up and starts questioning me and carries on with it as if I was not allowed to be there.

This is what I felt necessary to tell her in response to the manner in which she continued to press me with questions about my intentions.

She drove off not too soon. Not before picking a good haggle with me.

People argued over face masks and the proper etiquette of social distancing in public spaces and fistfights broke out and people killed each other over these things.

The collateral damage mounted from government mandated prohibitions and inside lockdowns and outside lockouts, enclosures and exclosures, separation and isolation, the shuttering of businesses and economic ruin and financial hardship.

The stress pooled deeper. A rising tide of tumult.

People in search of safe harbor and escape.

News articles piled up daily in the press about increasing mental health problems and dependencies and addictions and overdoses and suicides and domestic violence and other violent crimes.

People were losing their minds. 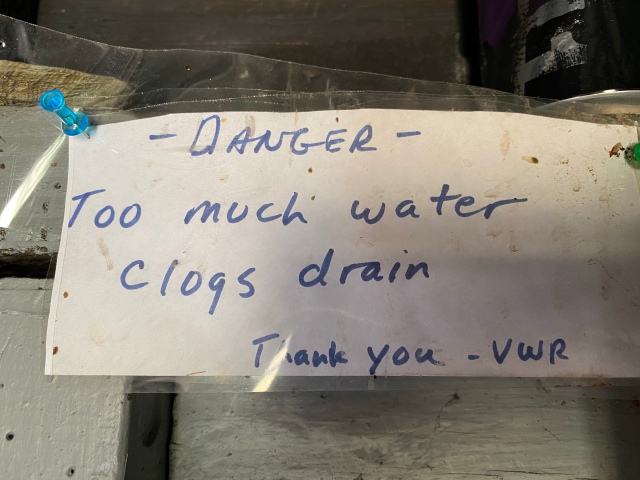 I read of an ambulance ride posted by Roger the Scanner Guy of a “Cal Star Transport to Cottage, Heroin overdose North County.” A friend died that day. He left behind a young child.

My grandfather died. We had planned to visit my grandmother in March of this year.

Then the virus arrived in the United States and everything ground to a halt and we called it off and hunkered at home as if in a bunker.

We were thankful again for a home and our health and for a moment at least we didn’t take everything for granted so much.

I am afraid to visit my grandma. We might bring the virus to her in our interstate travels through airports and whatnot, a death sentence at her age. But how much longer does she have?

My mom drank herself to death. My stepdad died of cancer not long afterward. That’s bad, but not to say I have it any worse than everybody else. Nonetheless, my brother lives under a bush, out of his mind, a panhandler on the corner, helpless and unhelpable. I see him out there drifting in a parallel dimension. He’s the one wearing the florescent dayglo safety vest.

My younger sister and her boyfriend have a young child. They had recently by some stroke of miraculous luck secured a home. But then came the virus and the lockdowns and closures and the pay checks stopped.

How long can people tread water?

They outlawed walking in the forest. They said it was too dangerous.