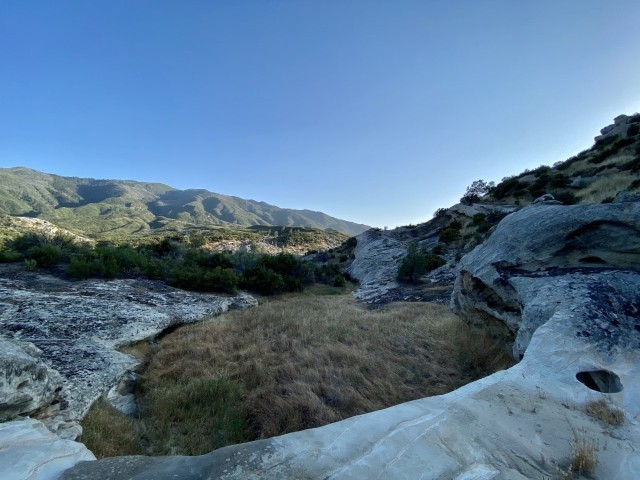 “Orr recalls only surface finds of crescents in the Santa Barbara area of California. He states that crescents have been found in late sites but feels they are early intrusive crescents brought in by the late inhabitants of the sites. In referring to the Santa Barbara area, Orr suggests a late date for crescents of 5,000 B.C. and an early period of perhaps 7,000 B.C.”

“Over the years, there has been considerable interest among archaeologists in the distribution, function, and chronology of chipped stone crescents in California and the western United States.

Questions about their chronology and function have yet to be fully resolved, but such crescents are widely considered to be Early Holocene or terminal Pleistocene time markers.

More than a thousand crescents have been identified from California archaeological sites, but a relatively small percentage have zoomorphic attributes, including a rare ‘bear-shaped’ specimen now listed as California’s official prehistoric artifact.”

“Crescents have been found on the surface in or near several low-density shell middens on eastern San Miguel Island dated to the terminal Pleistocene, between about 12,000 and 11,400 cal B.P.”

–Jon Erlandson, “In Search of White Bear: An Eccentric Crescent from Sudden Ranch” (2011) 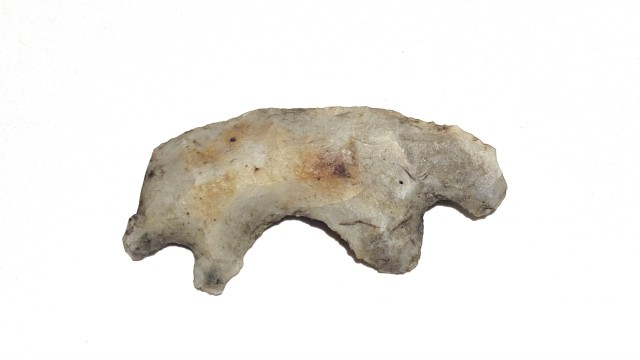 I stumbled across this chipped stone artifact while hiking the mountains. A surface find in Los Padres National Forest. It might be exceptionally old. Like 10,000 years old. It might be rare or uncommon. It’s something other than the common arrowhead.

The tiny piece of stonecraft appears nearly complete, but not fully intact.

My eleven-year old daughter said it looked like a bear as soon as she saw it. The way in which it broke may perhaps accentuate its bearlike form when viewed from certain angles.

Yet I imagine when complete, as suggested by photos of similar artifacts, its eccentric bearish appearance was no less remarkable, if it wasn’t even more pronounced.

That it may sort of look like a bear could be meaningless to the artifact’s original purpose.

Chipped stone crescents vary in form from lunate to winged to erratic. Zoomorphic or bear-shaped specimens are among the least common.

Ideas about what purpose the various crescents may have served range from ritual practices to utilitarian use; from effigies and amulets to scrapers, blades and transverse arrowheads used for hunting birds.

Crescents tend to be associated with coastal environments and lakes and wetlands. Many have been found on San Miguel Island in Channel Islands National Park in Santa Barbara County.

In comparing this broken specimen with those detailed by Erlandson it appears more similar than different. He describes and shows a photo of a white bear crescent found in northern Santa Barbara County in the 1930s, once kept at the Lompoc Museum.

“This specimen is of considerable historical interest as the first ‘bear-shaped’ crescent described from California,” Erlandson writes, “and one of the few bear-like crescents documented in the Far West.”

A different white bear crescent found at a Santa Barbara County site on Vandenberg Air Force base in 1997 was dated to well over 8,000 years ago.

The general timeframe crescents are associated with ranges from about 12,000 to 7,000 years ago. These artifacts are prehistoric, from the Stone Age.

I have no way to date the artifact I found.

But if for fun we go with the oldest known dates in the terminal Pleistocene, then just maybe the human who crafted this artifact had also seen mastodons and saber-toothed cats.

Maybe they had seen giant short-faced bears that stood six feet tall at the shoulder, could reach 15 feet in the air and weighed fifteen-hundred pounds or more.

Maybe that’s the bear this artifact was meant to immortalize.

In the land known today as Los Padres National Forest.