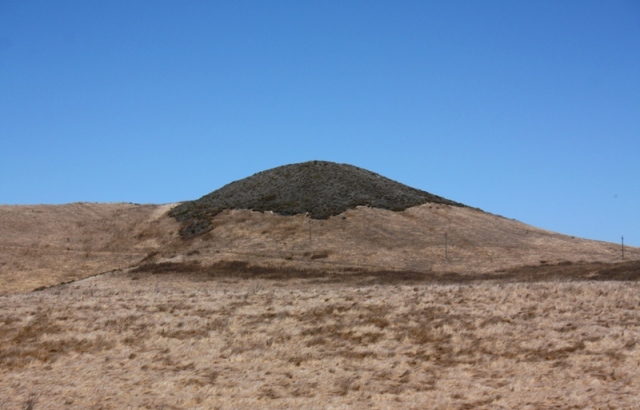 In certain places grass, sage brush and chaparral grow beside each other in notably separate and distinct patches. The specific place along the ground where grasses stop growing and woodier plants begin can be remarkably exact and linear in appearance when seen from a distance.

The lines are so sharp and the transitions so precise, as the undulating borderline between plants snakes along a hillside here or there, that it appears as if it could be the work of a professional landscaper. It is a botanical curiosity that stems from the particular geological formations of the area and the nature of the soils that derive from them. Within inches the dirt determines what grows.

“The Rincon-Vaqueros contact is sharply evident along this coast because the grassland ends abruptly at the contact and the sandier soils uphill are thickly covered with woody chaparral. There are few areas anywhere where geologic control of vegetation is so obvious.”

“The contrast is so sharp on the south face of the Santa Ynez Range that the geological contact can be located within inches by the abrupt change in vegetation. This is spectacularly evident along U.S. Highway 101 between Tajiguas and Gaviota where the change in slope and vegetation is a sharp line. A better example of geologic control of vegetation would be difficult to find anywhere.”

The Rincon and Vaqueros formations produce very different landscape features and types of soil when they weather and break down. The Vaqueros is sandstone and more resistant to erosion, which leads to the creation of ridges, rocky peaks and prominent wind scoured outcrops. The Rincon is a softer mudstone that forms less dramatic sloping fields and rolling hills.

Soil from the Vaqueros is loose and well-drained, characteristics which support deep rooted plants such as sage brush, dense stands of woody chaparral and trees. Whereas the Rincon deposit erodes into dense, clayey dirt that is poorly-drained and which tends to support shallow rooted grasses. The different types of soil result in a remarkably distinct separation of plant cover that is a defining feature of the landscape. 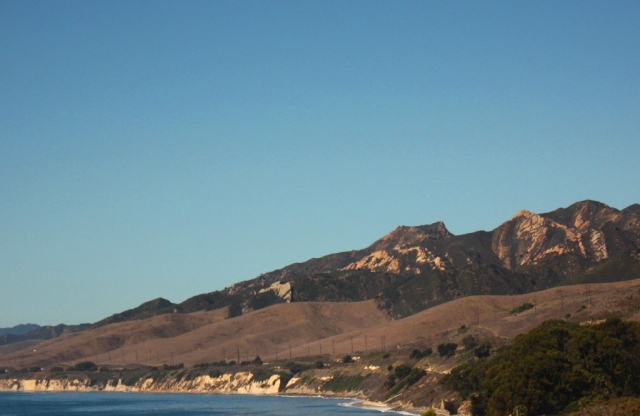 A view of the Gaviota Coast and the south slope of the Santa Ynez Mountains showing the sharp contrast between grassy rolling hills and chaparral covered rocky peaks. 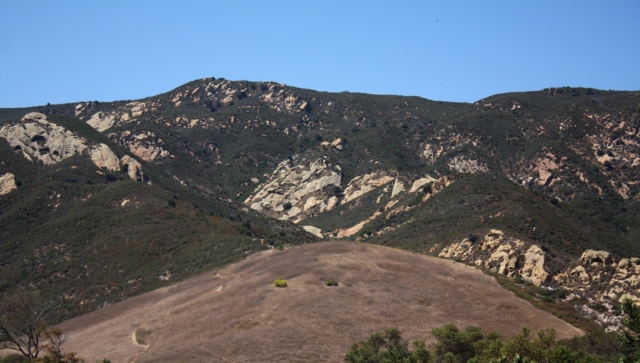 The Vaqueros Formation seen again here making up the rocky, chaparral covered mountain at Gaviota Pass with a grass covered hill of Rincon mudstone soil below.

1 Response to Geologic Control of Vegetation In Santa Barbara County