Make Do With What You Have

Big surf headed for the California coast on 4-1-12. (Surfline)

Scratching furiously through the choppy rough seas at a point break I was recently surfing, trying to paddle up and over a set wave bearing down on me before it slammed down on my head like a sledgehammer, I watched with bewilderment as a guy caught the wave barely making the drop.

Upon entry he rose as if to stand on his surfboard, but remained in a position halfway between laying down and standing up. He slammed through the bumpy, wind-blown sea and down the face of the wave towards its trough. I assumed he made a split second judgment not to try to stand because he thought he wouldn’t make it, and so was going to ride it out half standing, until he hit the bottom of the wave, and then jump to his feet and crank a bottom turn. But he didn’t. 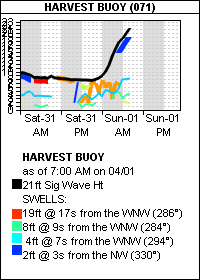 He just kept on sliding across the face of the wave on his surfboard in this peculiar position I’ve never seen before. He looked as if he was doing a bad pushup, with his arms extended straight and balancing on his palms and his toes with his butt in the air. I kept thinking he was about to jump to his feet, here, there, now, there he goes. But no, he never did.

I continued to watch him while I paddled like a madman trying to beat the approaching macker. At a certain point I realized I wasn’t going to make it over the wave before it broke. I would have to duck dive the oncoming 10+ foot wall of white water that was about to explode in front of me.

I quit paddling so hard while watching this guy bouncing through the chop closer and closer to me, and appearing to be barely in control, yet somehow still riding this beastly wind-swept wave.

As he slid across the wave in front of me, I was a half second away from yelling at the top of my lungs, so he might hear me through the roar of the breaking wave and howling offshore wind, “Stand up!”

Then I saw he had only one leg.

He only looked as if frozen from inability halfway between laying and standing. He only looked as if barely in control. With what he had, the guy was surfing the hell out of this set wave, like a gold buckle winning cowboy at a rodeo riding a rank angry bull. He was doing it with one leg, not on a kneeboard or bodyboard, but on a short little thruster.

I can’t think of another time when I was more relieved that I kept my mouth shut!

4 Responses to Make Do With What You Have