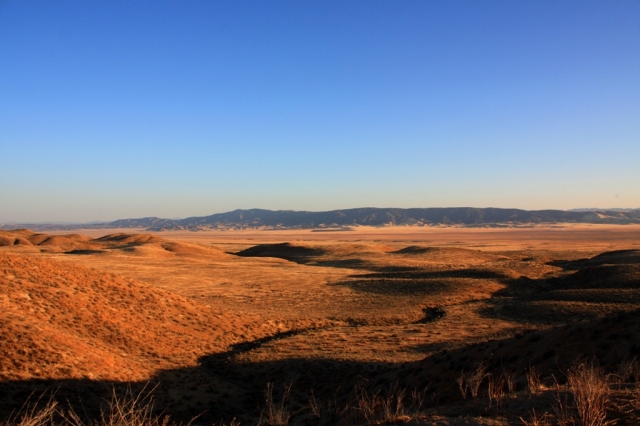 The Carrizo Plain in the hinterlands of San Luis Obispo County, CA as seen from atop the

I first drove the road 12 years ago. Over the years since then I’ve seen more pronghorn antelope than people out thataway. One midafternoon I came upon a guy hunched over the engine of his broken down truck. Unless I turned around I had no choice but to drive by him. I didn’t want to stop, but I couldn’t rightly pass him by. It was at least a half day’s walk to the closest thing that might be called civilization, which was little more than a few trailer homes. The temperature was in the nineties and the only trace of shade around fell in thin stripes behind fence posts and blades of dried grass.

I rolled to a halt in the middle of the road, turned off my engine and stepped out. He leaned around the raised hood of his battered old Ford peering at me through two slits in his sun-puckered raisin face. “Need a ride?” I said. He looked at his rig, the ticking of my hot engine punctuating the heavy silence. I wanted him to say no. He raised and let fall four fingers that drummed one after the other across the top edge of his raised hood. “Yeah,” he said. I considered him with renewed interest trying to assess whether or not I just invited a psychopath to sit a foot away from me in the middle of nowhere. I had to be the good Samaritan didn’t I? Should’ve been the cynical bastard that just drives on by.

The golden valley shimmered before us in the radiance of summer as we drove up the plain. The truck filled with the sour fumes of metabolized alcohol that seeped from his tiny exhaust pipe pores and billowed from his cracked lips with the few words he uttered. He said he lived out there. More like survived. Who the hell would live out there? What type of person? The land probably looked the same a thousand years ago just without the barbed wire and dirt road. There was nothing around. I scanned the barren plain wondering if he meant he actually had a house of some sort. Maybe a thin sheet metal wrapped hovel with rotting tires and tin foil pressed against the windows for curtains, a collection of empty bottles piled about its interior.

With a few points of his finger and a couple of mumbled words we ended up at his friend’s house, a lone outpost in the midst of the valley. I pulled up to a locked metal gate just off the dirt road and a man behind it halted whatever he had been working on to glower at me. A lush garden erupted triumphantly from the soil around his double-wide trailer in defiance of the arid climate. A storage shed stood connected to the mobile home by a long overhang that provide a covered workplace and various large tools and equipment dotted the yard. A flag pole poked into the sky, its banner waving lazily in the light breeze. It was a terrestrial spaceship, a self-contained survival unit existing in the vast space of the plain.

If the long distance from others wasn’t sufficient division then the imposing institutional barrier enclosing the parcel made the separation unequivocal. The strictness of the enclosure cast and uneasy vibe across the otherwise serene openness of the plain. Sequestered from the metropolitan community in a wasteland, and locked behind the suspiciously tall fence walling off his frontier fort oasis from the outside world, the man staring at me obviously wasn’t accustom to strange visitors much less appreciative of outside company. Was it wise security measures by a self-reliant resident of the boondocks, paranoid reclusion or militant defense of the unwarranted?

My passenger slid from the cab muttering his thanks once more. “What’s your name?” I asked just before he swung the door shut. “Tom,” he said. Later that afternoon on my way home, on back down the plain, I drove past Tom in his truck being pulled with a ratty old rope by his friend in his truck. Nobody waved. 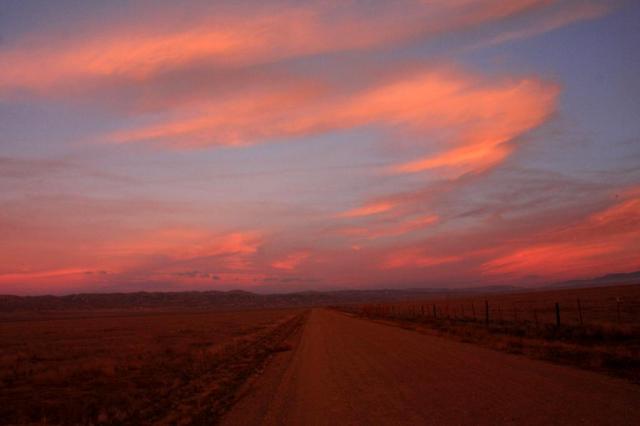 A road less traveled on the Carrizo Plain.