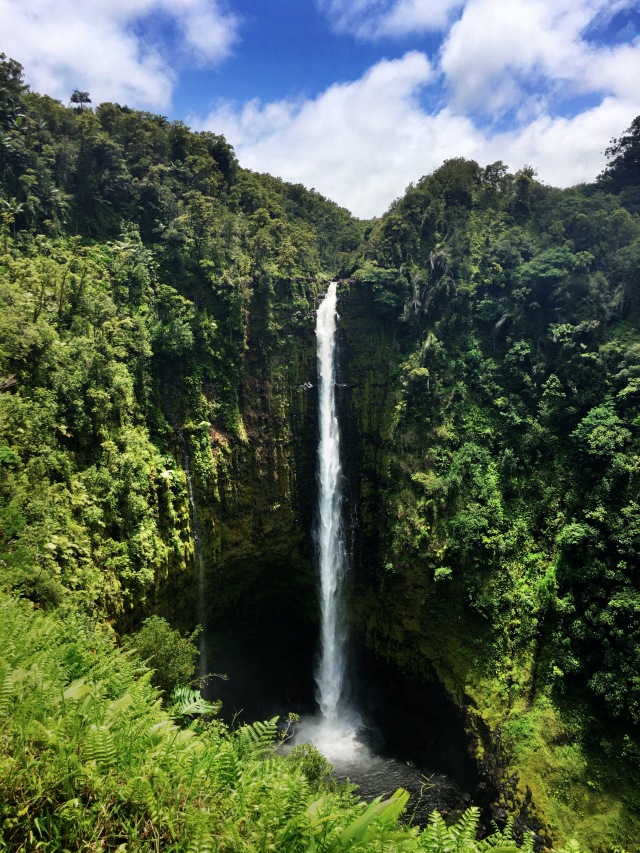 ‘Akaka Falls on Kolekole Stream on the Big Island of Hawaii plunges 442 feet.

‘Akaka Falls may be one of the most remarkable waterfalls in the world. Not because of its impressive height nor natural splendor, but because of a tiny fish measuring no longer than five inches that lives in the creek, and which accomplishes an extraordinary journey as part of its life cycle.

The Hawaiian freshwater goby or Lentipes concolor was a traditional food source of the ancient islanders. It was raised in the waters of flooded taro fields in an early system of aquaponics, wherein the fish and plants were farmed in a symbiotic relationship.

Today the ‘o’opu ‘alamo’o, as it is known in the Hawaiian language, is noted for its incredible ability to scale the 442 foot sheer cliff over which ‘Akaka Falls pours to reach its natal habitat and spawning grounds.

A male Lentipes concolor. The fish is endemic to Hawaii.

The following description is taken from an interpretive sign near the waterfall:

“The name ‘o’opu ‘alamo’o comes from the Hilo area and refers to the lizard-like (mo’o) shape of the head.

The scientific name for the ‘o’opu ‘alamo’o is Lentipes concolor. This name recognizes the ability of the male to change colors during courtship and periods of aggression.

For the ‘o’opu ‘alamo’o, a native goby living in Kolekole Stream, life is full of challenges. Imagine having to swim 2.5 miles upstream from the ocean and then climbing 442 feet straight up against the flow of the waterfall!

An ‘o’opu begins as an egg laid in the upper reaches of the stream, often between rocks in the streambed. Once the egg hatches, the embryo drifts downstream with the current to the open ocean. Here the larvae remain for up to six months. When the ‘o’opu receives the freshwater signals from the stream, it’s time to begin the swim back upstream.

The ‘o’opu uses its suction disc and pectoral fins to climb up the water-slickened surfaces along the rocky sides of the waterfall. As an adult, the ‘o’opu measures about five inches. It stays upstream amongst the rocks and lays its eggs to start the next generation of ‘o’opu.”

Kirill Vinnikov, a PhD student working in the Department of Biology at the University of Hawaii whom researches amphidromous gobies, provides an explanation that helps clarify the graphic above which is posted near ‘Akaka Falls:

“All species of gobies have a unique morphological feature: their adults have a peculiar fusion of pelvic fins to form a disc with a strong sucking power. Amphidromous gobies use their sucking disc to move upstream; the disc allows them to attach to stones and climb on vertical rock surfaces, and finally, to reach their home habitats even when they are located at high elevations above waterfalls.”