Marijuana in the Woods: Endangering Hikers and Killing Wildlife 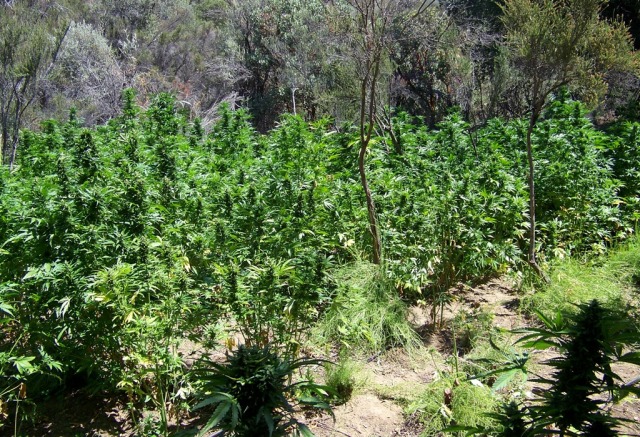 According to the Santa Barbara Sheriff’s Department, “large-scale marijuana cultivation is a serious and increasingly widespread problem on public lands in California, including the Los Padres National Forest.” In 2010, out of California’s 18 national forests, the Los Padres ranked fifth for the number of marijuana plants eradicated by law enforcement officers.(1)

I have come across numerous marijuana grow operations over the years. Too many to recall. Both inactive no longer used sites and actively growing plants. I’ve seen them in one form or another in Bear Canyon, Potrero John Creek and Godwin Canyon in Ventura County. In Santa Barbara County, I’ve come across several grow sites in the Montecito foothills, Cieneguitas Canyon, Goleta foothills below West Camino Cielo and in Lewis Canyon, to name just a few.

Choose any major canyon or flowing creek and there is a decent chance that it’s in current use or has been used previously to grow marijuana. Spend enough time off-trail in this part of the Golden State and a hiker is likely to stumble across the work of guerrilla growers at some point.

In times past, out of youthful naiveté, I was never concerned about the danger of a potential run-in with a grower. Over the last couple of years, however, my view of this issue has changed. Now I feel the creep of concern wash over me when out alone off-trail in the woods and I see the tell-tale signs of growers.

A Threat To Hikers

Whereas I once assumed that weed growing around these parts was the work of harmless potheads looking to grow their own smoke and make a few dollars, it is now clear that in many instances they are operated by Mexican drug cartels, and other ruthless characters who will not hesitate to turn my day into a living nightmare. News reports chronicle the finding of high power rifles and law enforcement officers being fired on when raiding grow sites.

I never carried a firearm a single time in my younger years, but I’ve now been forced to wrestle back and forth against a growing compulsion to carry a gun whenever I go for an off-trail hike. I would rather not. I have no interest in getting into a firefight and I have enough to carry without the added burden of lugging around a loaded pistol.

But the law does not provide protection, it punishes the perpetrator after the fact. Dialing 911, if by chance there is cell service, is a futile waste of time when I’m far away up some remote roadless canyon. Calling for help that takes hours to arrive is pointless when all I have are seconds to defend myself.

I am fed up dealing with the consequences of growers in the forests and open spaces I frequent. I don’t appreciate having to concern myself with the possibility of being shot at or maimed or killed by booby traps when I’m recreating. 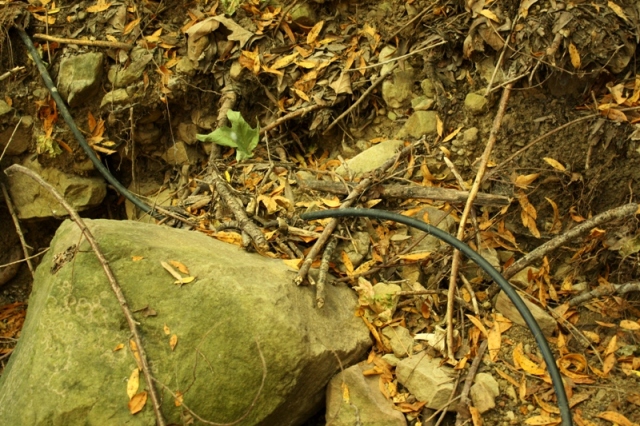 The tell-tale sign of a weed growing operation, black plastic irrigation tubing running through a canyon.

Consequences of Chemical Fertilizer in Riparian and Marine Environments

I’m disgusted and angered by the tons of trash and toxic chemicals left behind by growers. I recently found a couple of hundred pounds of chemical fertilizer left beside a tributary of Sespe Creek, which during winter rains will leach into the drainage and wash down stream threatening critical habitat for the endangered southern steelhead. The nitrates from the fertilizer can spur harmful algal blooms in creeks and rivers, which can lead to hypoxia or depleted levels of oxygen that can suffocate fish.

But it does not stop there. Eventually the fertilizer may reach the ocean where it works in a similar manner but with an added twist. The fertilizer fed algal blooms can release vast quantities of the neurotoxin domoic acid into the water, which is absorbed and concentrated in shellfish like clams and mussels.

Aside from the possibility of poisoning humans, these are favorite foods of southern sea otters, which are officially listed under the Endangered Species Act as “threatened.” The otters eat the poison laden shellfish and become sick or die. In addition, blue-green algae cause microcystin intoxication in sea otters, a deadly liver infection.

Does it stop there? Theoretically, no. Sea otters are a keystone species that play a vital role in the marine environment. They feed upon, and thus help check the population of, sea urchins which are voracious eaters of kelp. If sea otters disappear so does the kelp, as the urchin population explodes and devours entire kelp forests leaving behind barren reef.

Kelp forests hold one of the greatest concentrations of biodiversity in all the world’s oceans and support about one quarter of native marine life in local waters. The submarine forests provide essential habitat for over 800 organisms from the tiniest sea creatures to large game fish and mammals. As the otters go, so does the kelp and all other life that depends on it.

While it may be a stretch to link such wide ranging destruction to marijuana growers, it is possible with enough chemicals washing into local watersheds. More to the point, though, the environment is already under enough stress from various causes, including massive fertilizer runoff from the state’s intensive agriculture. Additional sources of loosed chemicals only serve to exacerbate existing problems.

A potrero in  the upper Santa Ynez River watershed of the Los Padres National Forest.

Consequences of Pesticides on Wildlife

Lush well-watered pot plants growing in the hot and dry Mediterranean climate of Southern California are extremely attractive to hungry and thirsty rodents. To combat this problem growers haul in and carelessly disperse large quantities of rodenticide.

The result is the indiscriminate, incidental death of countless other animals from owls and hawks to bobcats and mountain lions, who die of secondary poisoning from feeding upon rats and mice that have eaten the rodent bait.

The poisoning of carnivores like coyotes, bobcats and mountain lions from anticoagulant rat bait is well documented. According to the National Park Service, 80 percent of bobcats in the Ventura County area that were tested had some form of rat poison in their systems and their population has plummeted.(2) While this is largely attributed to common residential and commercial use of poisons, it illustrates the catastrophic impact resulting from such deadly chemicals.

It is also possible for still more species to die of tertiary poisoning. For example, a condor feeding upon a bobcat that died from eating poisoned rats. It is not out of the ordinary for an area around a grow zone to reek of death.

In 2010, over three million marijuana plants were eradicated from Los Padres National Forest alone. Consider how many pounds of chemical fertilizers, pesticides and herbicides were used to grow them and the impact it had on wildlife. And that is merely from grow zones that were discovered by police and it also does not include all other forestland outside officially designated national forests. 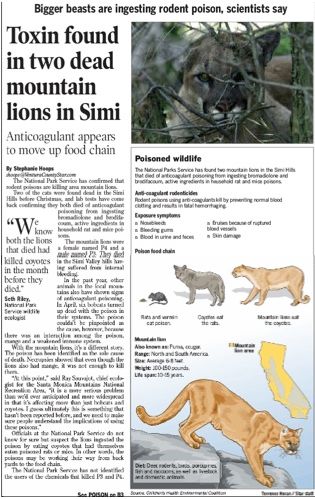 An article in the Ventura County Star newspaper detailing the tertiary poisoning of two mountain lions from rat poison. 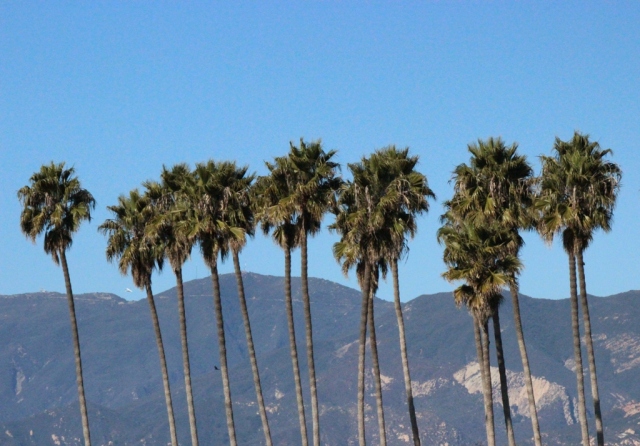 The Santa Ynez Mountains are a grower’s dream. Plants rooted on the sun-saturated south facing mountainside enjoy long hours of direct sunlight, intensified by the mirror-like reflection off the Pacific Ocean, and if growing on a slope get hit with direct sunlight from root to tip.

I take a libertarian position on the matter of marijuana possession and use. I find it utterly preposterous that the government has outlawed a plant. The issue for me is not marijuana, but how and where it’s grown. I draw the line when it comes to the careless, inconsiderate and destructive practices of guerrilla growers polluting my backyard and threatening my life and well being, just so they can make a buck or fill their stash box.

The individuals responsible, cut down the native vegetation, introduce toxic chemicals into these National Forest lands, harm the wildlife and divert natural water supplies into naturally arid landscapes. A major focus of these marijuana eradication operations is the removal of the chemicals, poisons and trash that were unlawfully introduced onto our National Forest lands.”

24 Responses to Marijuana in the Woods: Endangering Hikers and Killing Wildlife