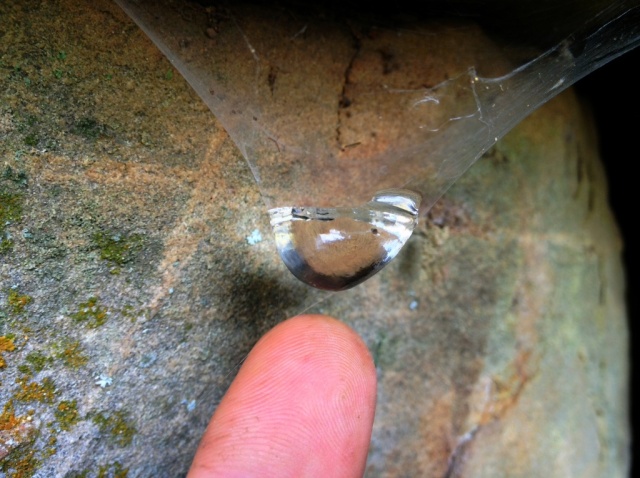 A drop of rainwater suspended in a spider web stuck to the underside of a boulder.

Prior to the recent few downpours last month in late February and early this March, it hadn’t rained in a long time. Just a smattering of precipitation had fallen here or there over the many months, but hardly enough to wet the ground in most places and everything was so dry from the ongoing drought that a day or so later, with a little sun and a light breeze, there was hardly a trace of moisture left.

Before February, as per the County’s official measure, it had been over a year since it had rained more than a single inch during the course of a day. I had started thinking it may become the season I remember ever after as the winter it didn’t rain.

Then it finally did rain: 2.47 inches on February 27th, 2.60 inches on the 28th, 1.16 inches on March 1st and 2.00 inches on the 2nd. The precipitation that fell during those several days amounted to almost half the total rainfall of the previous season.

Last season’s rainfall county-wide measured in at 46 percent of normal. With most of the wettest part of this season past the tally stands at just 43 percent of normal. Those recent four days of rain very well may end up being the vast overwhelming majority of all precipitation for the entire year! (As an aside, apart from the lack of rain, this winter in Santa Barbara has also been the warmest in five years according to University of California, Davis.)

“By tying its mating cycle to that of the rain, this beetle can remain underground for long periods of time in case of drought.”

Rain beetle larvae live underground for ten or more years before finally emerging as mature adults to mate. Male beetles fly low over the land, often while it’s raining, in search of females. As fancy looking as their finely, evolutionarily tailored body appears, once they emerge from the ground as an adult they never eat, as their mouthparts are not functional and they have no developed digestive system.

A decade of burrowing around as a grub underground eating roots, much to the frustration of fruit tree growers, only to emerge into the open air just long enough to get some and then die. The life of a bug.

I always wish I could get inside bugs and drive or fly them around like a big truck or an aircraft, like they had an air conditioned cab or a cockpit with plush captain’s chairs. By the looks of a rain beetle, I bet I could have some serious fun cruising around in them like Spaceman Spiff.