Fossil Falls, A Glacial Relic of the Pleistocene

David Stillman scrambling up familiar territory, through the gullet of Fossil Falls and over the slick, water polished basalt.

Standing in the arid Owens Valley of California, beside an ancient dry riverbed that can barely be discerned amid cragged lava flows and sandy flats, I strain my imaginative powers trying to picture a lush pluvial environment, wherein tree-lined streams lead down from the distant, icy Sierran peaks poking into the sky and feed a powerful, fast-flowing river.

The sign before me describes the richness of a riparian landscape that is the opposite of what exists around me. Men, women and children, I read, carry on life’s daily activities enjoying the natural wealth of a bountiful land of verdure and abundant animal life. I look away from the sign and see heat waves, barren mountain slopes, fields of dark volcanic rock and much bare dirt and sediment with only a meager speckling of native plants that can barely be called scrub brush. The environment here has radically changed since the times thousands of years ago when humans lived along the shores of this now non existent river.

Looking up the riverbed toward upper Fossil Falls.

Looking over the precipice of lower Fossil Falls.

Looking up the ancient Owens River toward the falls.

I’m at Fossil Falls, a pair of ancient waterfalls that have not flowed for at least 10,000 years. When lava oozed across the drainage channel the glacial Owens River carved its way through the volcanic rock creating a series of large falls. The basalt is slick and glassy, having been polished by the heavy sediment load carried by the turbulent prehistoric river. Rocks and boulders caught in vortices bored pits and deep round holes into the volcanic rock leaving behind a lithic sort of Swiss cheese formation, some holes large enough to crawl into.

Today there remains an extraordinary landscape of naturally sculpted, stark beauty. The traces of prehistoric humanity can still be seen in the form of millstone mortars, petroglyphs and even the rock rings that once served as foundations for dwellings. Obsidian flakes cast off from the crafting of tools are scattered all over the ground.

The following text is taken from the Bureau of Land Management:

AREA DESCRIPTION: Fed by the rains and snows of the last Ice Age, the Owens River once flowed from Owens Lake down through this narrow valley between the Coso and Sierra Nevada Mountain ranges. Several times during the last 100,000 years, the discharge from the Owens River has been great enough to form a vast interconnected system of lakes in what are now the arid basins of the Mojave Desert.

The rugged and primitive features of Fossil Falls are the product of volcanic activity. As recent as 20,000 years ago, volcanic eruptions poured lava into the Owens River channel. The erosional forces of the Owens River acted upon this volcanic rock, forming the polished and sculpted features that now can be seen at Fossil Falls.

EARLY CULTURE: Some 10,000 to 20,000 years ago the first human beings camped along the ancient rivers and lakes of the Mojave Desert. These prehistoric people harvested lakeshore resources and hunted large animals.

By 6000 BC, extreme aridity caused the last of these ancient rivers and lakes (including the Owens River) to disappear. The grasslands, marshes, and large mammals that had once flanked these lakes vanished. Prehistoric human populations may have partially abandoned low-lying desert areas in search of food and water in upland mountains areas.

WAY OF LIFE: Around 4000 BC, climatic conditions again shifted from the extreme aridity of the preceding period to the relatively moderate conditions that exist today. A cultural pattern was established that emphasized the use of a wide variety of desert plant foods that included both small and large mammals, reptiles, insects and waterfowl as well.

With only slight adjustments such as the additions of pottery and the bow and arrow, this way of life was still being practiced by the Little Lake Shoshone Indians at the time of the first European explorations of the Mojave Desert. Many of the archaeological sites at Fossil Falls are dated between 4000 BC and European contact in the 19th century. 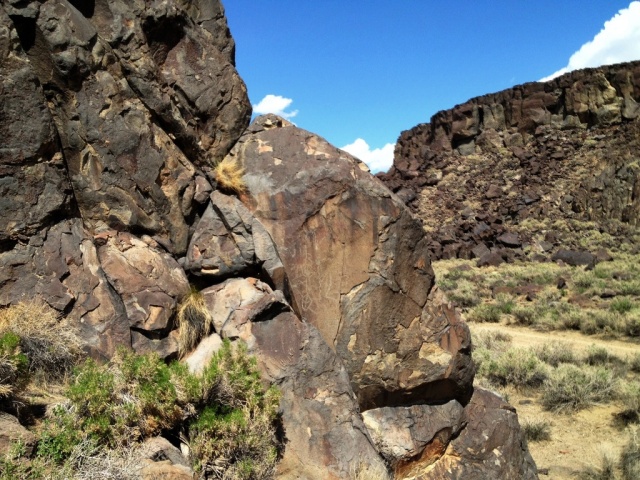 4 Responses to Fossil Falls, A Glacial Relic of the Pleistocene