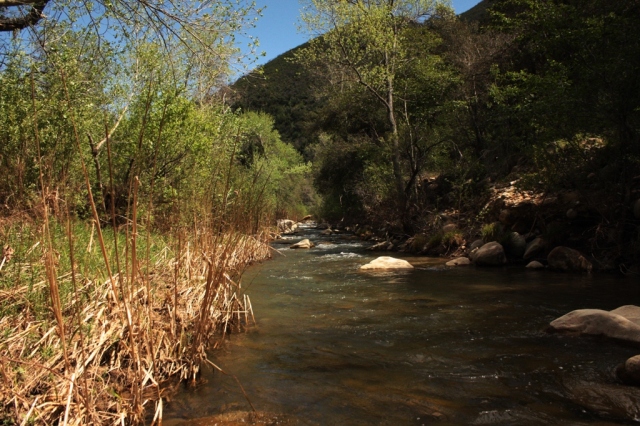 A tributary of the Santa Ynez River which once was the spawning grounds of thirty-inch steelhead.

Seventy years ago the Santa Ynez River in Santa Barbara County was known in California as “the most productive of all the little steelhead rivers of the south.” Bump into or know the right senior citizen and they can tell you about hooking loads of arm length sea-run rainbow trout in the Santa Ynez River, incredible tales one might wish were the fanciful imaginings of a dreamer, because to accept that it once really happened hammers home the devastating truth about just how much has been lost.

In the following excerpt from his book, Steelhead (1948), angler and author, Claude M. Kreider, artfully writes of his passion for and the thrill of steelhead fishing on the Santa Ynez River in what would later be seen to be the twilight years of the fishery’s heydays. A photo of Kreider hauling in a 29 inch, 10.25 pound steelhead from the Santa Ynez River can be seen on this blog at the following link: Native Steelhead of Yore. 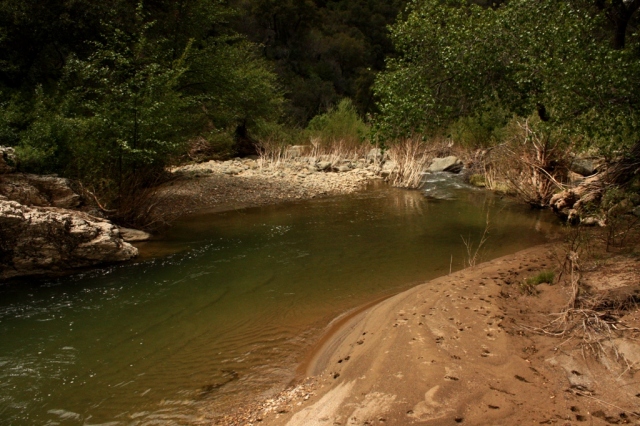 Immediately upon reaching the river we turned down the road which followed its shores through a wide farming valley toward the ocean. We saw a few hopeful anglers along the riverbank but went on to the beach, obsessed with the desire of steelhead coming in from the sea. A railroad trestle spanned a wide tidal lagoon from which the current slipped in a wide shallow channel down across the sand and into the breakers.

The tide was high, and we could occasionally see a great fish tossed up on the crest of the giant combers to be thrown up on the sand, where it struggled nobly through the receding waters to reach the thin apron of fresh water that indicated so surely that nature’s guidance had been true. The unfathomable mystery of it all was overpowering. I was enthralled, steelhead angler for life.

A few hopeful anglers and others with deadly grabhooks were trying for the struggling fish in the shallow water as they forged up toward the lagoon, and I turned away in disgust. So noble a fish deserves at least a chance to regain strength in the lagoon above and to be angled for by sportsman methods when it again can be a worthy antagonist and have a fair chance to pit its great strength and speed against light tackle. Happily, in later years fishing was prohibited in this shallow outlet of the river.

Standing midstream in the Santa Ynez River, a watercourse that flows only intermittently yet was exceptional habitat for huge runs of oceangoing rainbow trout.

Far back up the river and by now late in the afternoon, I stopped and assembled my tackle. There was no possibility of using the fly in the turbid water, so I reluctantly impaled a bait of bottled salmon roe on a No. 6 hook with two buckshot for weight to carry it down toward the bottom. A fairly stiffish fly rod of nine feet seemed to promise a good fight were a steelhead hooked and, at least, was the only possible concession to my preference in tackle and methods.

Just where to try for these great fish in those long opaque pools and churning riffles? This was surely a guessing game for the uninitiated. I could not know how far upstream the fish might have progressed, whether they traveled steadily or stopped to rest at favorable spots.

But the trout fisherman does not forget early training or the hard-earned knowledge of general stream craft. So I stopped at a long narrow run of deep water that was fed through a churning white-water chute. Those black swirls and the backwash looked decidedly fishy with indications of a deep pocket just out of the main current. 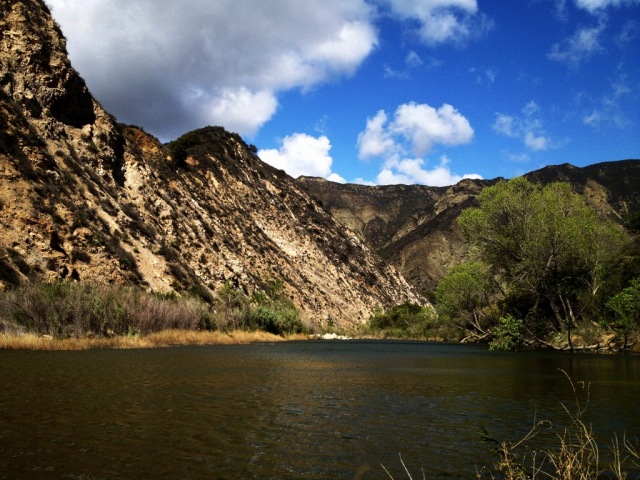 A placid length of the Santa Ynez River.

I placed my bait in a likely spot and after a few more casts felt a light nibble, as if a baby six-incher were taking it. A too slow strike brought up my bare hook. This was uninteresting, for even fair-sized rainbows of my experience had been always voraciously violent on the strike. So I tried again, and again came that gentle tug and my answering twitch of the rod tip. Instantly my rod arched sharply, and I was fast to a veritable submarine of a fish, my first steelhead!

At once this warrior shot far down the current, boring and charging with tremendous power. A great deal of line had melted from my large reel, which fortunately I had provided with ample extra backing line else this, my first great steelhead, would already have been gone.

But the pressure of the whipping rod at last slowed the fish, and it came out of the water in a tremendous flurry of spray to fall back with a mighty splash. My heart must of been racing, and I know my hands now trembled acutely as I manipulated rod and reel. Here, you see, in this little river of the farmlands fought the largest trout I had ever hooked. 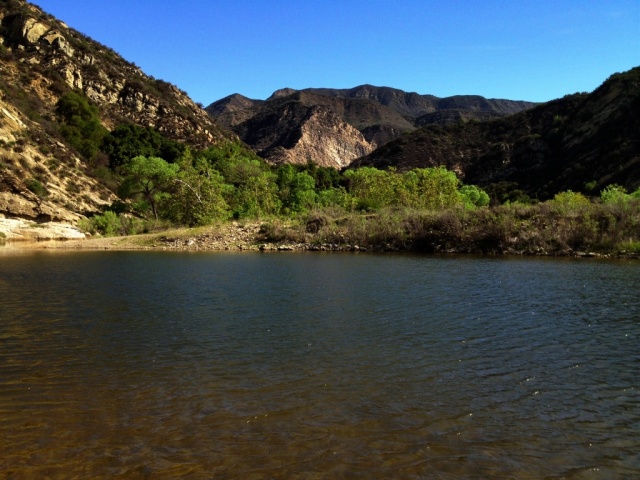 Morning serenity on the river.

My fish now charged back upstream, worked deep, surged under a mass of streamside drift—and was gone! Not much chance for another here, it seemed, but I lighted my pipe for solace and with renewed optimism tried again. And in that same magic, whirling series of eddies within a few minutes I was fast to another great steelhead.

This one ran straight down the river, as the other had done, placing a tremendous strain on my sharply arched fly rod, and so excited was I by now that I did not know whether to try and snub that wild battler or just let him go and try and keep up. Never in a fairly wide experience with fresh-water rainbows had I experienced such wonderful speed and power in a hooked fish.

I wondered, while stumbling down along the littered shore, if my ten-pound leader was strong enough, if that little No. 6 hook could have bitten deep enough to hold this monster fish. 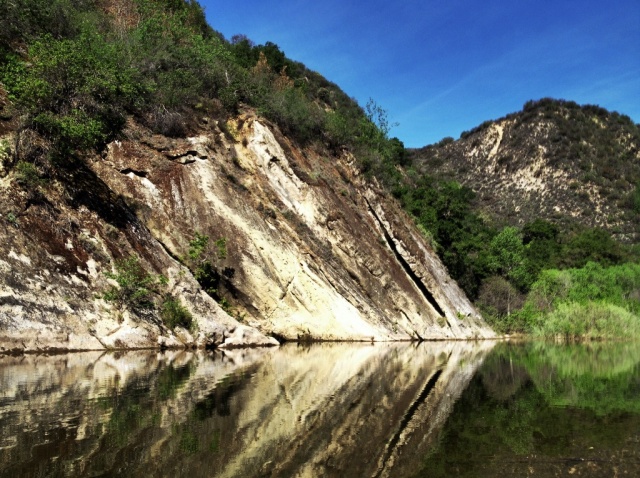 Mirror images on a deep pool along the Santa Ynez River.

I gradually gained some line at last by simply outrunning my steelhead, then it turned back upstream, necessitating speedy cranking of the fly reel, which retrieves line slowly at best. And now back at the head of the pool we fought the battle to a finish.

My fish was slowly coming in. Gently I submerged my large lake net in the water and slowly—oh, so slowly and carefully—drew my prize over it.

Back at the car in the gloom of the winter evening I weighed my beautiful fish, a silver-sided female with steel blue back which registered just 9 1/2 pounds. And my long suffering wife, who, I suspected, had had little faith in my winter fishing before, was properly congratulatory. 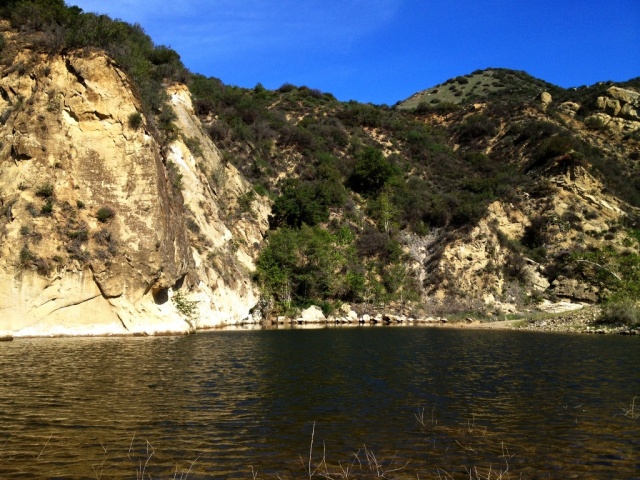 Native Steelhead of Yore on the Santa Ynez River