Chumash Rock Art, a Pool of Water and a Chipmunk

A Chumash pictograph with inset showing a recreation of the design.

A seasonal creek flows by this Indian rock art site in Santa Barbara County and there is a spring not far from the paintings. When flowing the creek cascades several feet over an exposed outcrop of bedrock and into a small pool near the painted alcove. On the face of the outcrop where the waterfall flows there is a cavity in the rock that catches and holds water for far longer than the pool below the falls.

I checked this natural tank in mid-July out of an interest in seeing, during the current severe drought, how long it will hold water through the summer. It was still holding a decent amount despite no rain in over three months, the last precipitation amounting in total to about one inch which fell on the first and second of April. As of August 8, the tank still held water, remarkably clean looking water, and was a magnet for honey bees seeking moisture.

I sat beside the small puddle watching polliwogs wiggle around. A week earlier I had scooped up and saved twenty or so of those same tadpoles from a tiny volume of water, nearly dried up, which was held in a cavity on the same rock, just above the puddle where they now swam.

I sat wondering if the longstanding puddle ever served as a precious source of stored water for the Chumash. There is the spring lower down the creek, but in such a dry landscape, during a record drought, any bit of water catches my attention and seems remarkable.

I had been sitting there for ten minutes or so when I suddenly noticed a chipmunk clinging precariously to the rock just above the waterline. It was wet and shaking and had his face pressed against the rock. It looked like it was going to fall into the water at any moment.

My camera flash caused it to do so and I watched it for a couple of seconds frantically trying to swim, fatigued, its puny body vertical in the water, barely able to keep its nose above the surface. It was unable to claw its way back up onto the rock despite its desperate bid for life and after bobbing there for a moment its head dipped below the waterline. I could see it wasn’t going to make it. 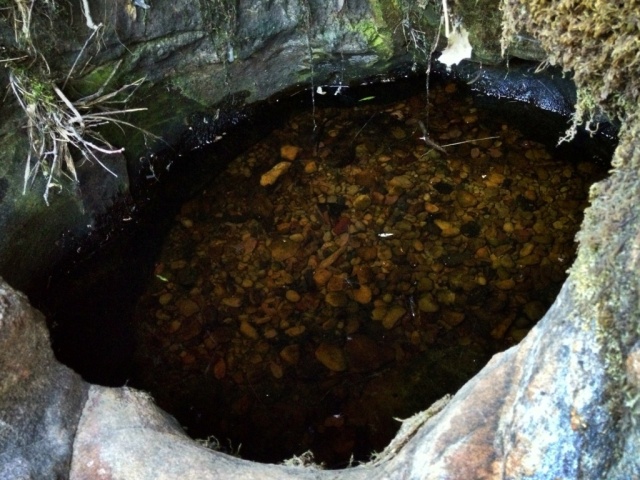 I jumped off the rock and snatched a stick from the ground and thrust it into the water. Should have seen how fast and how solidly the little thing grabbed the wood. I brought the stick out of the water and slowly set it beside me. The chipmunk just sat there clinging to it.

I reached into my pack to grab a few raw almonds, thinking to leave them there for it to nibble as I left, but realized I had taken out my trail snacks and left them in the car. It was getting close to sunset, and as the chipmunk sat there shivering, I wondered if it would live through the night or succumb to hypothermia in its wet and weakened condition.

In making an effort to carefully carry the chipmunk on the stick up to a patch of sunshine, he jumped off and scampered through the brush. He found his way up to the exposed bedrock shelves, which were still soaking up the day’s last remaining rays of direct sunlight.

As soon as he left the shadows and hit the sunny rock he froze and collapsed like a lizard on a hot stone on a cold day. I laid my palm flat on the stone beside me which had already fallen into the shadows and it was exceptionally warm to the touch. The heat radiating from the bedrock must have felt awesomely good to the poor little cold bugger, which had just spent who knows how many hours or maybe days trying to avoid drowning. 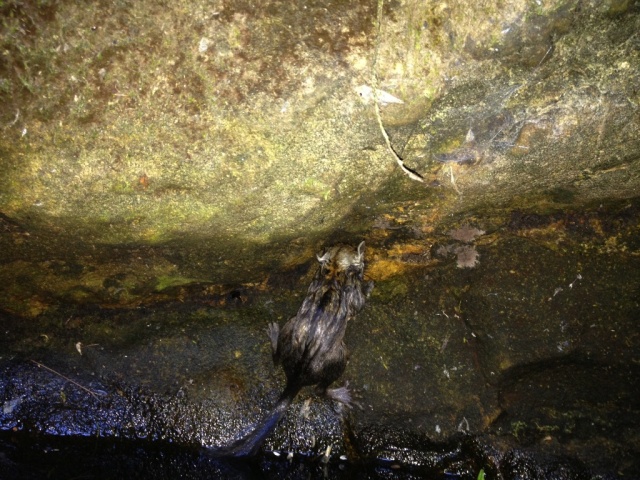 Clinging on for dear life.

The moment of rescue.

5 Responses to Chumash Rock Art, a Pool of Water and a Chipmunk