Ice Cans To Rockets, A New Stove For A New Century 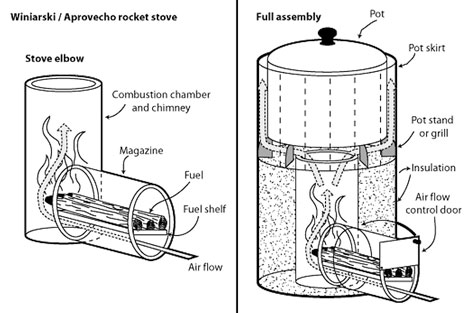 The rocket stove was developed by Dr. Larry Winiarski in the early 1980s. (A detailed explanation and design principles of the rocket stove: PDF)

Nearly one hundred years ago an enterprising butcher in southern California fabricated a stove from a steel box or “can” which was once commonly used to freeze water into blocks of ice before the days of widespread refrigeration.

The wood burning boxes became known as “ice can stoves.” They were distributed, circa the 1920s, throughout the lands which would later be known as Los Padres National Forest. (Blog post: The Ice Can Stove: A Brief History)

I don’t believe there is a substitute for today’s tiny backpacking stoves and small fuel canisters. They’re light and take up little space in a backpack and and don’t require the time and effort to find dry tinder, kindling and wood and stoke up a fire hot enough to do the job. They work with little effort virtually anywhere in all conditions.

But what if there was a backwoods onsite alternative reminiscent of the old ice can stoves, but vastly more efficient? A wood burning stove for the new century. A stove of this sort does exist and could be out there.

It’s the rocket stove. A miniature, highly efficient wood burning device specially designed to make use of small caliber branches and significantly less fuel when cooking. What otherwise would serve as little more than tinder and kindling in an ice can stove back in the day or an open flame campfire is all that’s needed to fuel a rocket stove. Cook full meals or boil water with nothing more than twigs.

The wood burns so hot and so thoroughly in the insulated combustion chamber that virtually no smoke is emitted and the volatile gases, which otherwise escape from a campfire or traditional stove and are lost and wasted, are burned up as well. Because of its exceptional efficiency it’s possible to avoid blackening the bottoms and sides of pots and pans.

It seems to me that rocket stoves could be installed throughout the forest at backcountry campsites much like the old-time upcycled ice cans had been a century ago. They could be crafted onsite using nearby rocks and sand to form the exterior body of the stove and the interior insulation surrounding the burn chamber.

The metal parts, light and relatively small, could easily be packed in. The mortar used to seal the exterior stone body of the stove would be the heaviest component to transport. Perhaps such a project might be worthy of Boy Scouts and Girl Scouts or other groups and volunteer associations.

Such a device would provide a tool with which backpackers could cook hot meals and drinks and purify water without need of the industrially produced propane-butane fuel canisters and stoves commonly used these days; gear that in its production, transport and sales releases a significant amount of pollution.

The rocket stoves would be fueled instead by a renewable and thus sustainable resource produced naturally at the site of use and of which there is no shortage in the forest, wood. The burning of wood in this manner is, arguably, carbon neutral or carbon lean. While burning fossil fuels like propane and butane releases into the atmosphere carbon that has been sequestered for millions of years, burning wood only releases the carbon which had been absorbed by the tree or bush during its short lifespan. 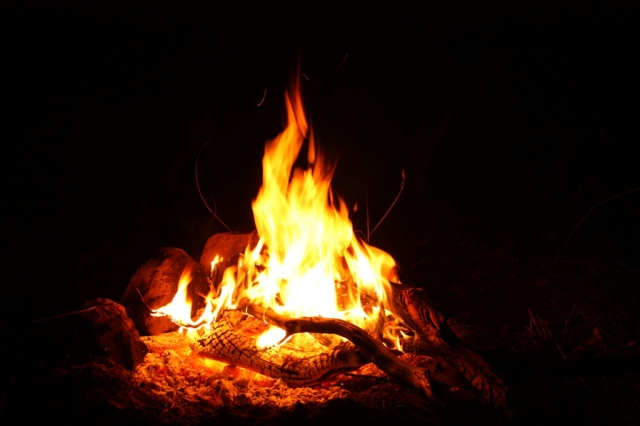 A rocket stove would have a few notable disadvantages, however. It would require more time to use than a pocket stove in that a camper would have to forage for wood fuel and work to kindle a fire rather than merely turn on the gas and spark a flame.

With winter rains such fuel might tend to be moist and less inflammable and more difficult to set alight. Perhaps the greatest problem would be that the use of such stoves would be prohibited during extended portions of the driest times of the year, in summer when official fire restrictions are in effect throughout the forest.

Yet it might be a worthwhile endeavor, if enough people would be willing to forgo a little time and convenience for sake of carrying a little less gear in their pack and reducing, if only a little, their share of pollution and trash.

6 Responses to Ice Cans To Rockets, A New Stove For A New Century