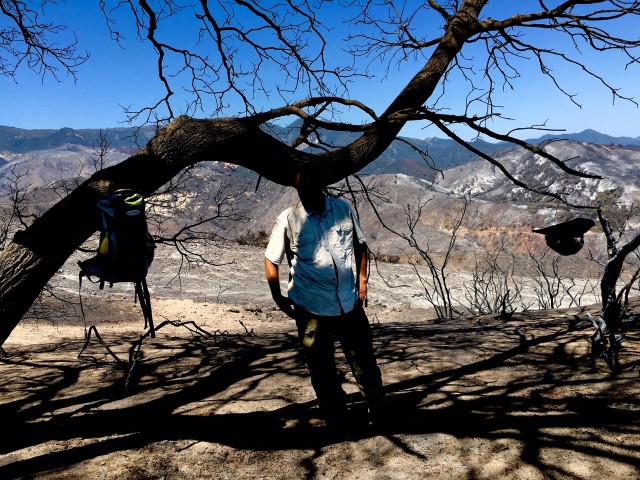 I take the kids to the zoo. It’s not a place I can appreciate any longer, but granny bought us a family membership. So we go.

The kids scamper through the prison camp, er, zoological garden with great delight. We pause at each cell, I mean cage. Wait, that doesn’t sound right either. What’s a politically correct euphemism for cage? Never mind. We stand peering in on the caged occupants of each cell, living specimens in a museum collection.

We meander our way over to the giraffe pen. The kids know the routine and ask to feed the giraffes. Fortunately there is a long line of people which provides a pretext to kindly deny the request. Instead we stand beside the railing and watch the spectacle.

A giraffe snatches lettuce leaves from people’s hands with its long and curving purple tongue, an eager crowd lined up waiting patiently for their brief moment of interaction with a large mammal.

The kids enjoy the scene, but I wonder if the line of people may reflect the ecological poverty of our lives. I feel that there are much deeper matters going on here than merely feeding giraffes.

A few weeks later I wander hills scorched by the Sherpa Fire, dusty and gritty and covered in soot and the black charcoal slash marks of burnt branches.

The land is desolate and deathly.

Little life appears to remain beyond a few patrons of death. Yellow jacket wasps gnaw scorched rodent carcasses and a kettle of turkey vultures circle and soar overhead. And, of course, the supposed survivors of even nuclear holocaust, the cockroaches.

A wet spot in the blackened and ashy dust tells of a deer nearby. I follow the tracks for some distance before losing interest. Deer are all I ever see, it seems.

As the body wanders so too the mind.

I think of how few wild animals I’ve seen over the course of my life. These experiences have been virtually nonexistent, most close encounters having been with caged animals or those in some way tethered to humanity. It’s a depressing thought. The burned wasteland before me reinforces a feeling of emptiness.

In “Feral: Rewilding the Land, Sea and Human Life,” George Monbiot writes of suffering from a “craving for a richer, rawer life” and that he sometimes feels as if he is “scratching at the walls of this life, hoping to find a way into a wider space beyond.”

The wider space he seeks is a wild, natural one. He concludes that he is “ecologically bored.” The boredom stems not from an entitled sense of expectation to always be entertained, but an existential need deeply rooted within the prehistoric soul of humanity.

In one passage illuminating this idea he writes of finding a freshly dead deer, which he throws across his shoulders to take home:

“As soon as I felt its warmth on my back, I wanted to roar. My skin flushed, my lungs filled with air. This, my body told me, was why I was here. This was what I was for. Civilization slid off as easily as a bath robe.”

This comes from an environmentalist that had long advocated veganism, not some crazed bloodthirsty trophy hunter. Monbiot is writing existentially in this excerpt. When he writes, “what I was for,” he means as a member of the species Homo sapiens and when he writes, “why I was here,” he means as an animal on Earth. He suggests that his feelings of sudden and intense emotion stemmed from ancient “genetic memories.”

In a column for the New York Times he further explains: “I accidentally unlocked a lumber room in the mind, in which vestigial faculties shaped by our evolutionary past are stored.”

Monbiot is describing a profound life experience; the moment when he felt the fullness of his humanity or humanness, as unlocked through a close encounter with a wild animal. It is key that the animal was wild, not the perverted concoction resulting from domestication. 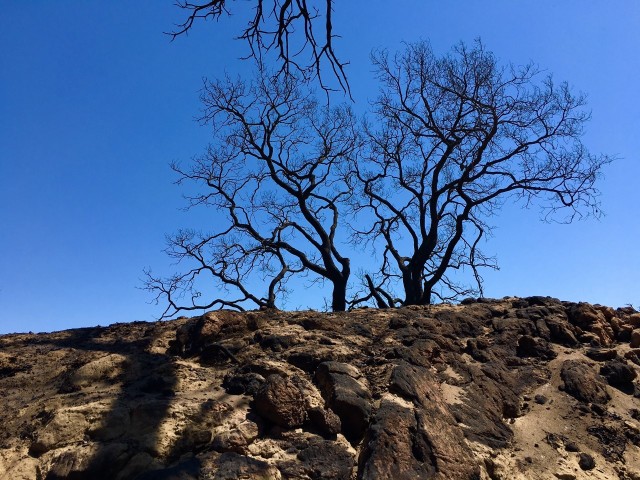 Ostrander: What do you feel is your responsibility to the animals that you raise on Polyface Farm?

Salatin: Our first responsibility is to try to figure out what kind of a habitat allows them to fully express their physiological distinctiveness.

-Interview excerpt from Yes! Magazine: Joel Salatin: How to Eat Animals and Respect Them, Too: Why this foodie farmer believes sustainable farming includes meat.

Joel Salatin, the rambunctious and heretical self-described “lunatic” farmer behind Polyface Farms, strives to provide animals under his care an opportunity to achieve their full potential as a species.

Salatin talks passionately about how his free range, open pasture chickens are allowed to “fully express their chickenness.” Of his pigs he says the same: “They’re fully allowed to express their pigness.”

His chickens peck and scratch their way through open air and grass fields, following cows and picking bugs from their manure, and mimicking, as best as possible, the ways of nature. The chickens do what chickens were born to do, so far as possible for a domestic animal living on a farm. The components that comprise their open pasture free range habitat—plants, insects and other animals—enable the birds to be birds.

What kind of habitat allows a human, the animal Homo sapiens, to fully express its physiological distinct humanness? Is it more likely that of the metropolitan hardscape devoid of wildlife or the natural realm of plants and animals found in wildlands?

One fact is certain: The advent and evolution of humanity did not occur in a city.

As my feet plod on through the ashy soil of the Los Padres National Forest my mind ponders existence and meaning. 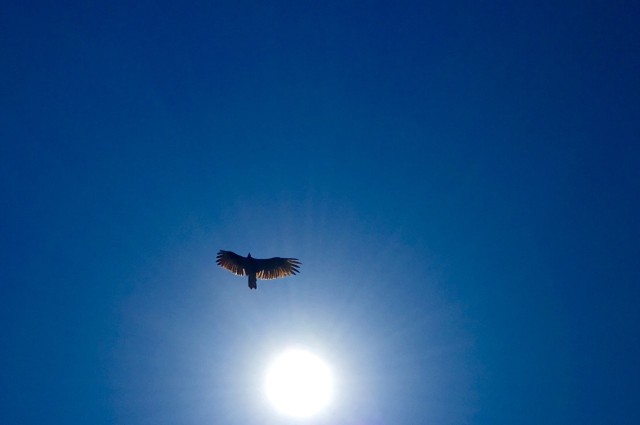 “Elephants, with horses and reindeer, tended and nurtured man’s rage for more than a million years. It takes all of the hunter’s intensity, effort and strength, wily intelligence, knowledge of natural history, and determined murderous force to stalk and kill an elephant in an open plain with hand weapons. From the elephant’s point of view, as from the man’s, the activity is beneficial. Who else except men will remove the bad seed? The lion and crocodile glean an infant elephant now and then, but there is no one else to sculpture the species, prune out the weaker of the giant forms, or to hone the elephant’s intelligence. How lovingly the two have been at it, treasuring each other, each raising the other to new levels of stratagem and majesty, polishing each other’s intellect for a million years.”

—Paul Shepard, “The Tender Carnivore and the Sacred Game,”

I think of how human nature might’ve been; hundreds of thousands of years of close contact with large animals. From the advent of our species we have, to vaguely mention just a little, gazed upon, pondered, learned from, befriended, mimicked, hunted and eaten animals. We have sheltered ourselves with their skins and bones, crafted tools, instruments and ornaments from their bodies and defended our lives from their attacks.

And then in the blink of an eye, in evolutionary terms, these animals and many more disappeared from human life. What little remained was further removed from humanity with the growth of civilization.

I wonder what happens when a component that so significantly shaped humanity is removed from the equation. 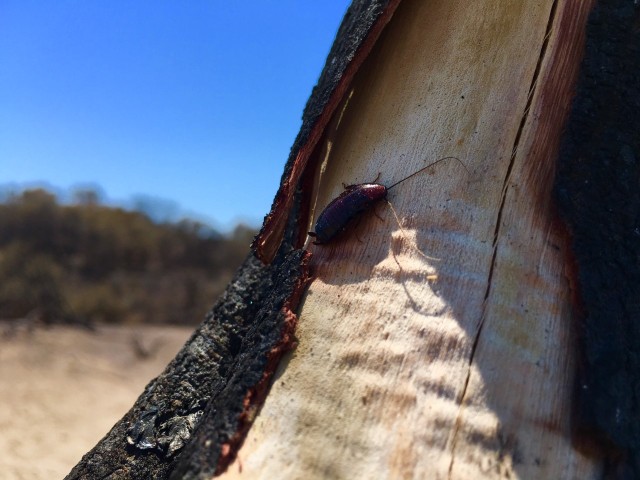 In “The Tender Carnivore and the Sacred Game,” Shepard writes, “The past, having shaped our species, holds clues to normal function.” He goes on to note, “Since modern forms were created in the past they depend on environments like those in which they were shaped.”

In “The Others: How Animals Made Us Human,” Paul Shepard writes of why he believes “the human species cannot be fully itself without these others,” the animals. “The human mind is the result of a long series of interactions with other animals,” he writes.

In “Thinking Animals: Animals and the Development of Human Intelligence,” Shepard argues that animals played a crucial role in the evolution of the human mind, and that during that long process an indelible mark was stamped onto our genetic code.

“There is a profound, inescapable need for animals that is in all people everywhere, an urgent requirement for which no substitute exists,” Shepard writes.

“It is no vague, romantic, or intangible yearning, no simple sop to our loneliness or nostalgia for Paradise. It is as hard and unavoidable as the compounds of our inner chemistry. It is universal, but poorly recognized.”

Here we may see a much earlier articulation of what the aforementioned Monbiot referred to as “genetic memories.”

“Zoos, pets and domestic animals give us personal satisfaction only because of the ecological poverty of our lives,” Shepard writes. “Animal movies, pets, zoos and toys serve as a crude substitute for an inborn need.”

I step through scorched, leafless branches beneath large oak trees. I plop down in the shade atop a sandstone boulder for a rest, thinking about the idea of ecological impoverishment, and an existential need that may be written into my DNA.

What must it be like when a wild African lion roars. To feel its terrible, deep and guttural voice resonate in my chest cavity. To feel the blast of its pungent hot breath. Maybe it’s a silly thought, but it’s remarkably appealing for some odd reason.

What must of life been like to witness bison on the American plains so thick and vast that the land seemed to flow like a river with their earthy dark bodies stretching to the horizon. To hear the low rumbling din of a million hooves hammering the earth like pistons and to feel the ground tremble under their wild power.

A mind wandering further down an imaginary path with example after example, I start feeling like I’ve never seen anything wild in my life.

I suddenly realize a deep “craving for a richer, rawer life.” I’m a starving man in desperate need of a full course meal, yet have only ever been allowed mere scraps and remnants of what little remains.

Then came the fox.

The fox stands in the shadows gazing at me. I stare back. The fox stretches, arching its back. We watch each other intently. His appearance is timely. His presence helping to soothe a dour mood.

Lamenting how little life experience I have had with wild animals, I was wandering the barren hills burdened with a mind plagued by a feeling of deprivation. The fox seems to have come to my rescue with a message of hope.

The fact that it’s a remarkable moment at all may speak to the depth of the deprivation in question. Nonetheless, the brief encounter, fleeting and but a mere trace, eases my mind.

How odd it is the fox happened across my path on this particular afternoon. Indeed, how odd it is. Then came the fox.

13 Responses to Gaviota Coast Gallavants: Then Came the Fox