Making a Mockery of a Wildlife Sanctuary 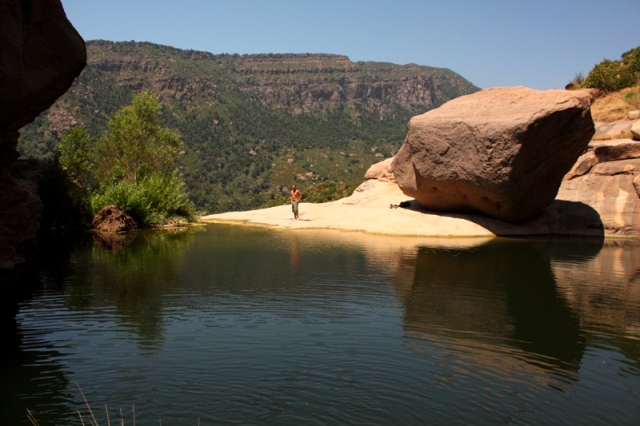 Yesterday I enjoyed some of the best my little corner of the planet has to offer. I surfed for a couple of hours and spent a number of other hours hiking the backcountry and swimming in a mountain stream. Ironically, it was the lesser visited backcountry that appeared the most abused, as opposed to the immediate coast that never stops crawling with people.

The unbelievable amount of trash strewn about the creek was rendered less shocking only because of the sight of a smoldering fire in one of the many makeshift campfire rings. Several charred logs had been left smoldering in the mid-July 85 degree heat, as light afternoon winds were kicking up.

“Are you the morons that left the fire smoldering back there,” I pressed, cursing under my breath as I approached three hikers leaving the scene. I realize that, perhaps, a more diplomatic approach may achieve better results. But I’m not one to sugar coat my words for sake of other people’s feelings, and I am not a missionary or a teacher trying to convert or educate the savages. Once lost to the dark side I’m not wasting my time trying to bring them back by talking sense to the senseless.

“Nah, but thanks for putting it out,” one of the two guys responded as the lady with them looked on. The other guy stood sucking wind, his shirt off bearing a flabby back that resembled the color of a cooked lobster. When we passed him earlier in the day it was pasty white.

Thanks for putting it out? I thought. You were just ******* standing there looking at it a minute ago! What the hell you thanking me for? We walked up on them as they were standing across the creek, on their way out, talking about all the smoke billowing into the air. They watched me climb down to go drown it out after seeing that they weren’t going to do it. Hence the guy’s thank you comment.

An hour prior, we had been standing on the rocks overlooking the same camp in disgust and disbelief at all the trash spread about the area including at least six plastic gallon water containers. Interestingly enough, I did not see any smoke and nothing caught my attention when surveying the place accept all the garbage.

Perhaps at that time the logs were still burning slightly, unnoticeably, and then had begun to flare up and smoke after we passed and the afternoon’s light winds kicked up. I don’t know if those people started the fire or not, but I do know they saw it smoking, and they were in the process of walking away.

As I climbed down to the gravel flat and walked over to use one of the gallon containers for water to soak the fire, a large pile of previously unseen garbage came into view. What I had seen at first was nothing compared to what was piled up under the rock shelf and out of sight from above. There was a pile, and I mean a pile of trash. On the rock face just above the garbage heap somebody had scratched “TRASH.”

There were aluminum cans, plastic water bottles, socks, dehydrated food pouches for backpacking, shredded plastic bags stuffed with still more unidentifiable trash and innumerable other indiscriminate items just to name a few of the things. There was so much trash that, with my small already fully loaded day pack, I had no room to pack or carry it all out. I had to leave the vast majority of it. I have never seen so much litter. It would take a couple of Hefty bags to haul it all out.

When we got back to the trailhead, the afternoon heat, although relatively mild for this time of year, was plenty enough to get the honey bees busy. An apiarist has set down a collection of bee boxes and there was a heavy flow of them flying through the parking area like bats out of a cave mouth at dusk. And we were off back home to the foggy coast.

This entry was posted in Uncategorized and tagged Tales. Bookmark the permalink.

4 Responses to Making a Mockery of a Wildlife Sanctuary