“California will be found to have more oil in its soil than all the whales in the Pacific Ocean. The oil is struggling to the surface at every available point and is running down the rivers for miles.”

A chemist and geologist, Silliman traveled to California in 1864 in search of oil. He had been sent on a private mission by Thomas A. Scott, who was then serving as President Lincoln’s Assistant Secretary of War, and who also founded the California Petroleum Company.

Archaeological evidence indicates humans first began using tar and oil from natural seeps in the Santa Barbara area around 5000 B.C. Portuguese explorer Juan Rodriguez Cabrillo, sailing under the Spanish Crown, witnessed Chumash Native Americans using asphaltum in 1542 to seal their wood plank canoes and subsequently used it himself on two of his ships. In 1772, the Spanish expedition led by Juan Bautista De Anza came across springs of asphaltum oozing out of the ground and flowing into the ocean.

Natural seeps in California had been known of and used for a long time before Silliman’s venture, but he was one of the very first Americans to explore the new state for oil. His trip was launched in response to the stories about seeps that had filtered east through the years. While in California Silliman stopped in Ventura County and called upon a man named George Gilbert. 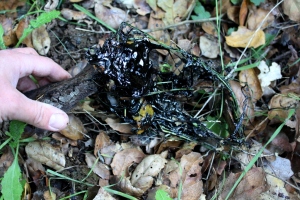 Fresh sticky oil seeping out of the ground right under the oak leaves.

In 1860, Gilbert noticed oil naturally draining out of the ground in the hills between Ventura and Ojai. Having experience in the whale oil refining industry, Gilbert wisely knew the black viscous substance oozing from the earth was a valuable commodity and set out collecting and processing it for market. Deposits of oil in the ground would help replace the living vats of oil swimming in the sea. While visiting Gilbert’s refinery, Silliman witnessed oil running into a nearby stream and it was that experience he was describing in the opening quotation at the top of this post.

Gilbert’s operation was located somewhere near Rancho Arnaz, which is not a very far walk from where the Sulfur Mountain site noted here is found. At the seep there is no trace of industry infrastructure or equipment that suggests it is the result of a well that was drilled and improperly capped, although that very well may be the case. The earth has been moved and mounded up somewhat around where the oil emerges from the ground, but that is about the only trace of prior activity at the site aside from barbed wire fencing.

The oil flows right down into the creek, which in the rainy season eventually dumps into the Ventura River. There are also a number of other seeps in the near vicinity along the banks of the creek and they all show fresh, sticky black oil. In other places there are hardened tar deposits.

The Sulfur Mountain location today is illustrative of the types of natural seepage that have historically flowed and still flow from the soils and seafloor of California. Numerous local place names reflect this characteristic like Coal Oil Point in Goleta, La Brea Creek on the west end of the San Rafael Wilderness and Oil Canyon near Summerland to name just a select few. 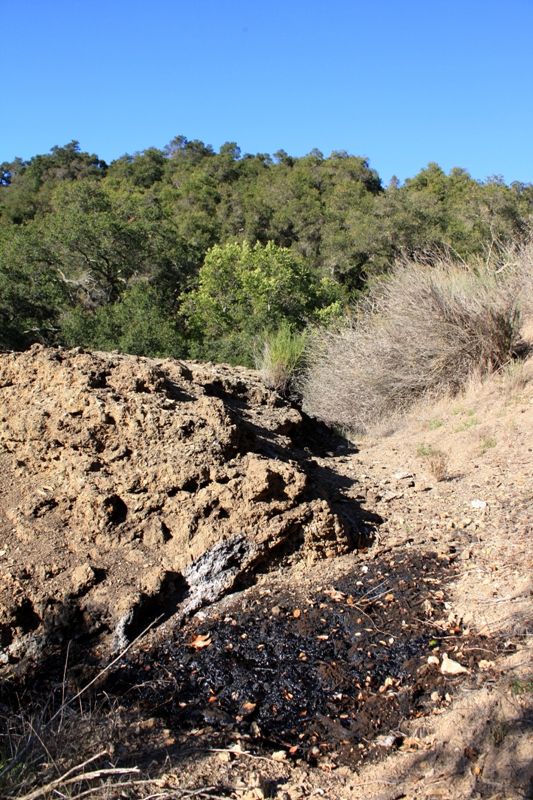 The source of the seep, just a small roundish spot of oil in the dirt. 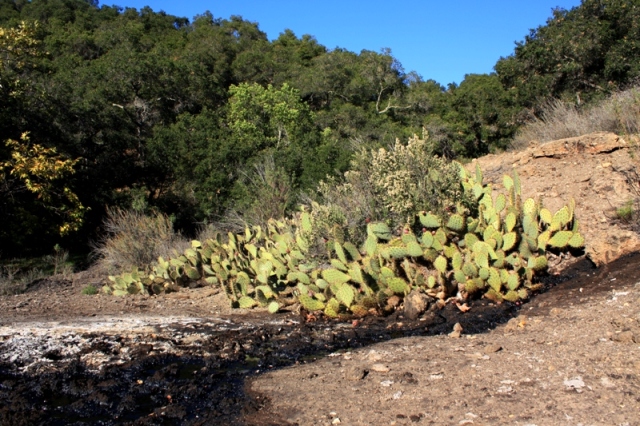 The oil originates just out of frame on the right and flows past this cactus and down onto the flats and into the creek. 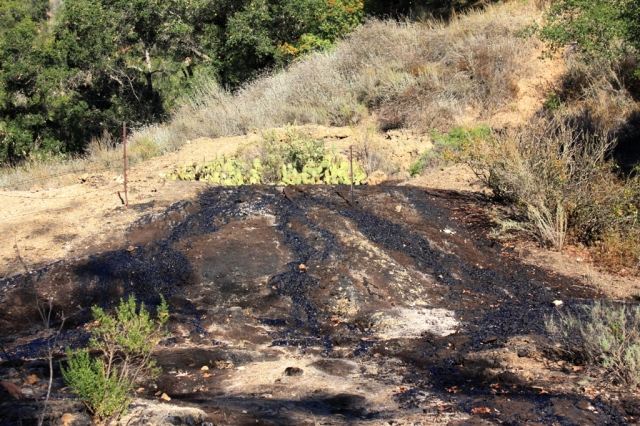 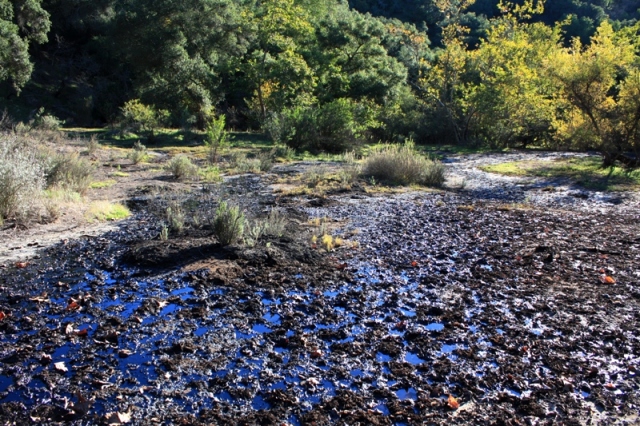 Oil headed toward the creek. Liquid, and freely flowing, it reflects blue from the clear skies overhead. This photo was taken in early fall prior to seasonal rains. What looks like mud is a result of the oil. 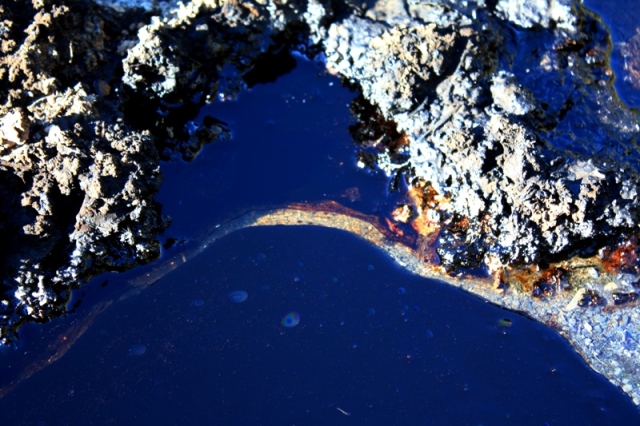 Crusty older tar deposits with a mix of water and oil flowing slowly down the slope. 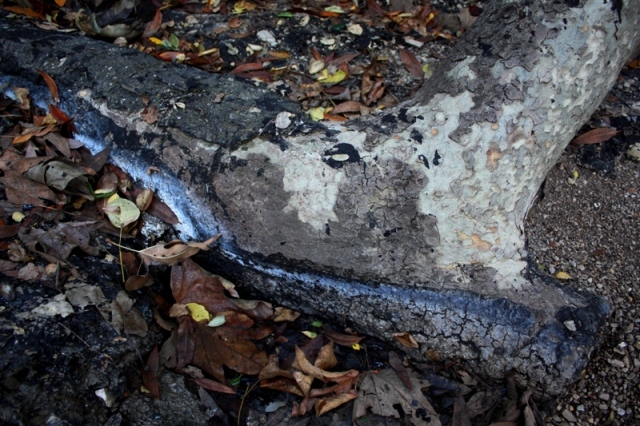 A sycamore tree that is rooted in the creek and coated with oil. 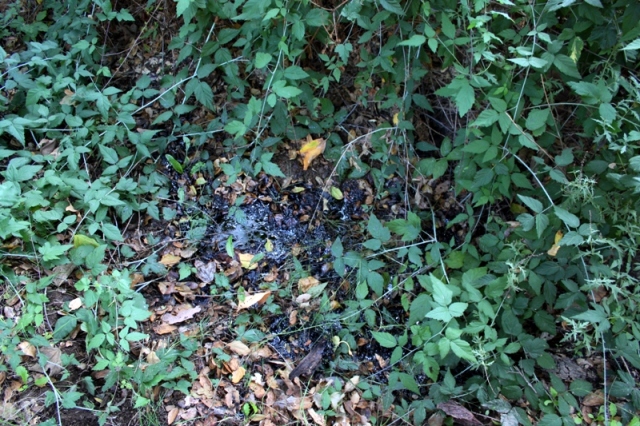 The seep is large enough that it can be seen on satellite imagery using Google.