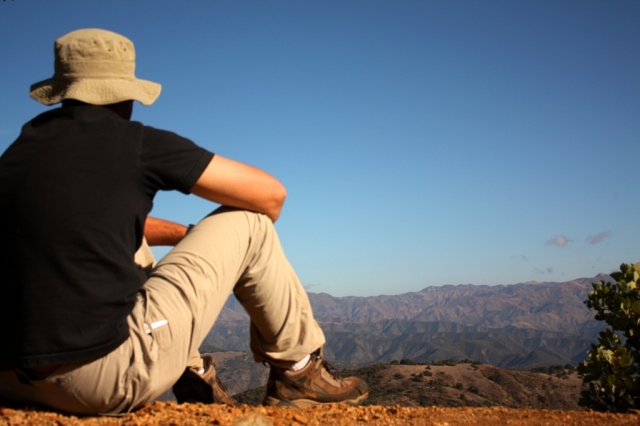 As it happened, nearly a year ago, I was perusing satellite imagery of the local backcountry as I often do. Once again the slim canyon west of P-Bar Flats Campground on Camuesa Road caught my eye. It looked like it had a tiny potrero on its lower end and I wanted to check it out. I had passed by the area innumerable times over the last two decades, but never stopped to take a looksee around.

Not long after scanning the imagery, I was reading a post by Craig R. Carey one day and, funnily enough, he mentioned the very canyon I had been scoping out. Thanks to the Red-Bearded Romper, that raconteur of Los Padres wilderness reconnoitering and recreation, I learned that the watershed in question is named Rose Canyon and that it used to contain a backpacking camp called Rowe’s Gulch. Well shizaam, Andy. I knew that canyon looked good, I thought. Apparently the USFS abandoned Rowe’s Gulch Camp during the 1960s.

And so it was after almost a year I headed out to get boots on the ground and finally take a gander at Rose Canyon. Sufficient time, I hoped, so as not to appear to be intentionally hornin’ in on Mr. Carey’s raison d’être. I marched down Cold Springs Trail North from East Camino Cielo Road and within about a half mile I crossed paths with two younger fellas heading out. I stepped aside to let them pass. “Cold last night, huh?” I asked. There was still a light dusting of snow on the higher peaks in the distance. “And wet. It rained pretty good,” the first guy said flatly. “But it was fun,” his partner added with a bit more pep as he went by. “It’s always good to get out,” I said.

I passed by Forbush Camp and on past Cottam Camp, across the Santa Ynez Riverbed and into the oaky defile of Rose Canyon. A few weeks earlier I had spent a night at Cottam in glorious weather with the sycamore leaves coloring the trees an orangy-yellow, but now the trees were completely bare limbed from the recent cold snap. It was midweek and nobody was around. Divide Peak gate had recently been closed thus limiting access by car or motorcycle and it had just rained about half an inch. Tudo bem!

Rose Canyon creek cuts a tight cobblestone and boulder-studded drainage through short mountains along its lower reaches before dumping into the Santa Ynez River. The hills part and open into a small chaparral covered valley at its upper end, where Rowe’s Gulch Camp was once located, and the creek turns into an arroyo-like stony flat bottomed wash. A remarkable stand of old-growth chaparral is bunched along the foot of the mountain on the southern side of the valley. Thick trunks bend skyward towering 12 or maybe 15 feet overhead, while under the shadowy canopy it’s open and clear enough to walk through with ease. It reminds me of the chaparral on the saddle between La Cumbre Peak and Cathedral Peak. When so much of the forest around these parts has been turned to ash from numerous wildfires, this type of old growth flora seems quite striking to me whereas in years past I took it for granted and was likely to pay it no attention. 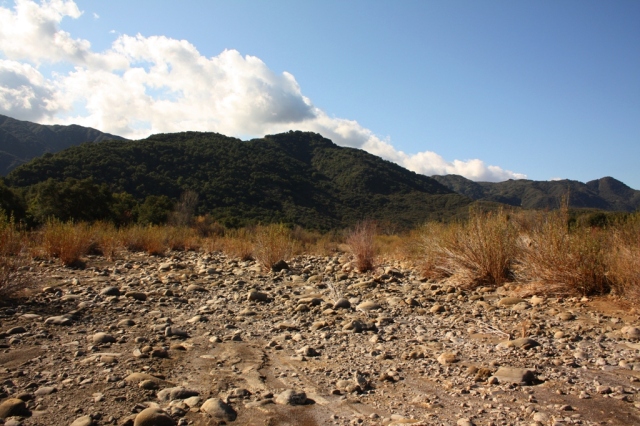 The mighty Santa Ynez River. . .bed. Hard to imagine this crusty dry rock field, prior to being dammed in multiple locations, was not long ago one of the greatest Southern Steelhead runs in California.

Interestingly, there is a faint trail leading alongside the creek for much of the way up the canyon. Somebody has walked it relatively recently, too. It is heavily overgrown in most places, but it has the square-bottomed look and width of a footpath even, curiously, in sections that run through areas of heavy brush overhang and sapling growth. That suggests the path has been well-walked over time and in existence for awhile. Despite Rowe’s Gulch Camp being abandoned for nearly a half century, could it be the remnants of the original trail?

It’s a route that, while nonexistent in many areas, is still much more of a path than anything the canyon currently seems to warrant. It actually resembles a well-beaten but unkempt trail to an infrequently used campsite, which seems odd to me in a dry canyon of relatively little attraction. In fact it looks just like the trail I described running through the defunct Pine Canyon Flats Camp. I know old Indian trails over stone still visibly exist, as on Hopper Mountain in Ventura County or Painted Rock in San Luis Obispo County, but perhaps routes through the woods and over soil linger far longer than I assumed.

If there remains any other vestiges of the old camp such as remnants of ice-can stoves or fire rings I didn’t see them, but I didn’t look for anything of the sort. I was there more to set eyes on the place and get the lay of the land in my mind rather than search for relics.

As the day wore on the cloud cover thickened. I hung around a bit and then kicked rocks down canyon back toward the trailhead. I didn’t want to leave the woods. And so having lingered around on the trail here and there on my way back finding any little excuse to loiter, I ended up hiking the last hour of my time in darkness. With dusk, fog filled the valleys and eventually the backcountry disappeared within its misty shroud before turning black. I had a headlamp, as I always carry on day hikes just in case, but didn’t bother to break it out. It’s been awhile since I really got out in the night and I was enjoying it. With the waning moon there was still plenty of light to guide my noctivagant return. 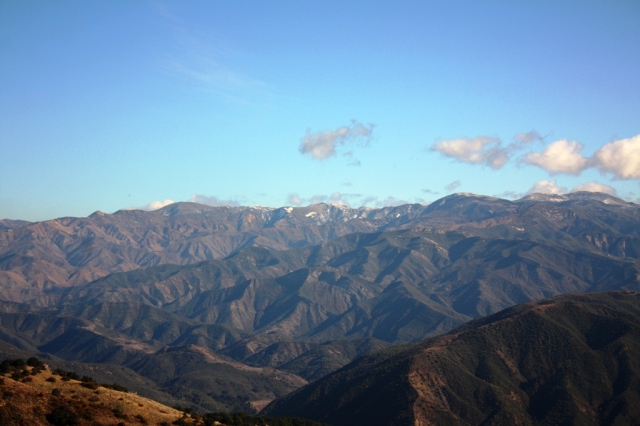 Rose Canyon runs along the lower left side of the frame in the distance just beyond the grassy hilltop in the foreground. 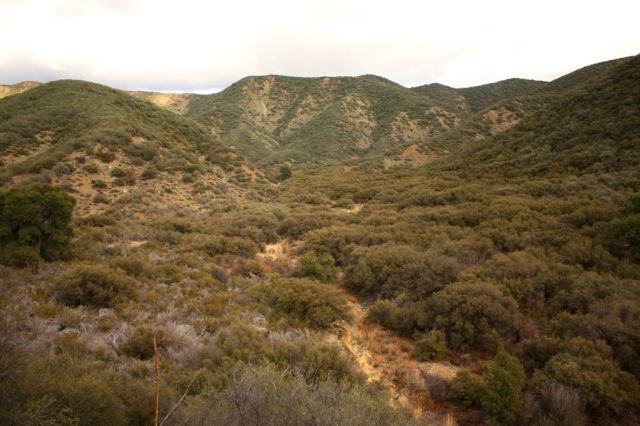 Looking upstream toward the upper reaches of Rose Canyon. As best I can tell, Rowe’s Gulch Camp was located somewhere in the vicinity of the oak tree in the distance. 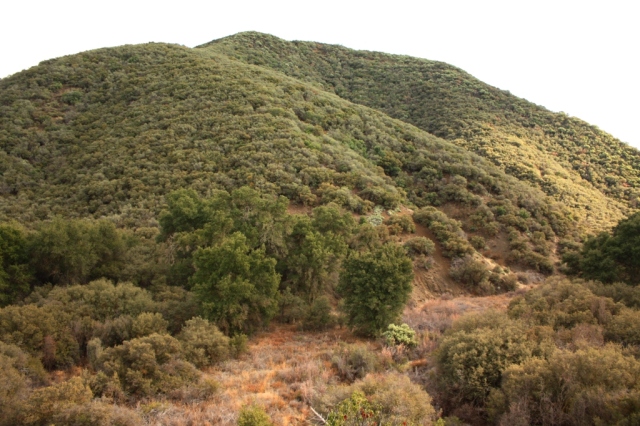 Looking rightward from the previous photo or downstream. The creekbed winds along the grassy flats and against the mountain.