The trail we hiked through California’s Dick Smith Wilderness.

David Stillman and I recently hiked the Deal Canyon/Rancho Nuevo Canyon trails. Five years after the Zaca Fire destroyed most of the forest, with sooty deadfall logs lying about and the earth bristling with the blackened skeletons of chaparral and dead trees, the wilderness feels like a weed-choked wasteland.

After a wildfire plant life rapidly returns. The bushes, scrub brush and chaparral, it all grows back relatively quickly, along with weeds galore. Of course, fire or not, the various sandstone outcrops lining canyon walls will always remain. But without towering big cone Douglas fir trees clinging to the rocky slopes, the characteristically stark Dick Smith Wilderness feels especially barren and empty. 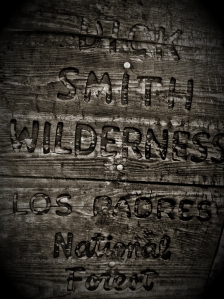 As I walked past pockets of dead trees and peered up at cragged mountainsides patchily covered in them, I was left to imagine what it all looked like when the blackened, leafless trunks were alive and green before the fire. I had not hiked either trail before, never seen the area.

Unlike oak trees that can endure and survive fire to sprout new growth from their branches or rootballs, conifers go up like torches and do not regrow. Throughout the hike I thought of how the tall timber will, best conditions allowing, take decades to regrow from seed. How it will never be the same in my lifetime. And how I never saw it all alive.

The majestic needle-leaved sentinels overlooking rocky, cave-riddled mountainsides adds an enchanting feel to the land. The trees in lower Rancho Nuevo Canyon survived the fire preserving the characteristic ambiance of this particular stretch of the canyon. And a patch of forest surrounding Mine Camp remains in otherwise burned out hills. In much of the wilderness, however, the alluring character the conifers added to the land went up in smoke.

I took along my trusty iPhone for a camera and played around with it using different settings and apps to capture some images from the hike. 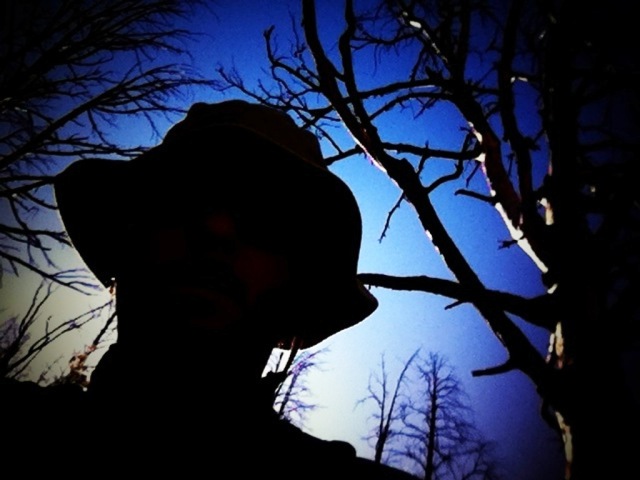 Black trees and blue skies in the Dick Smith Wilderness. 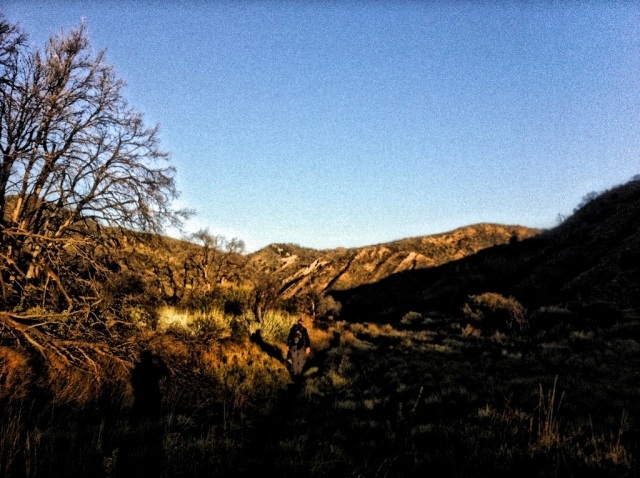 The slant of early morning light along the Deal Connector Trail. 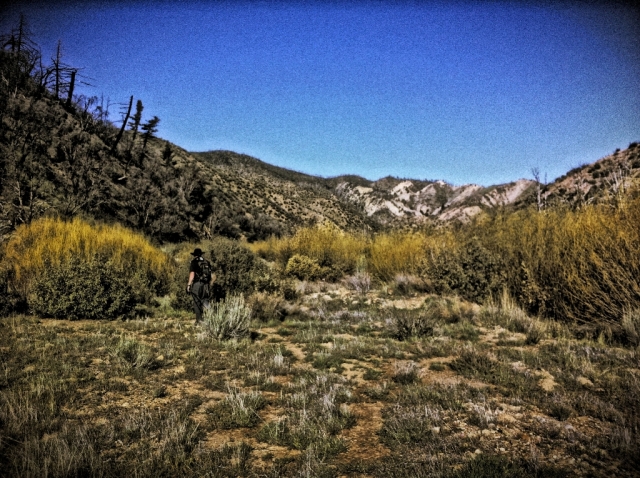 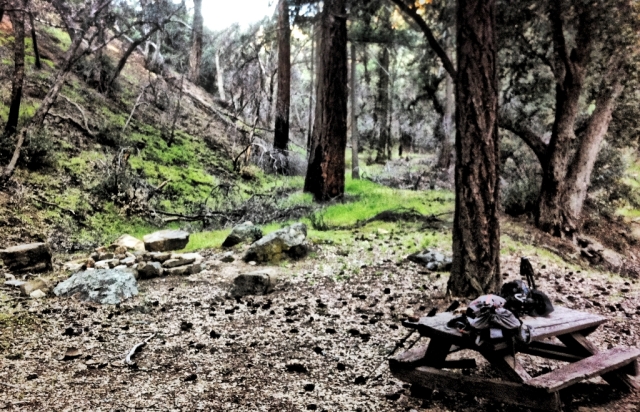 The red dot marks the location of Mine Camp. 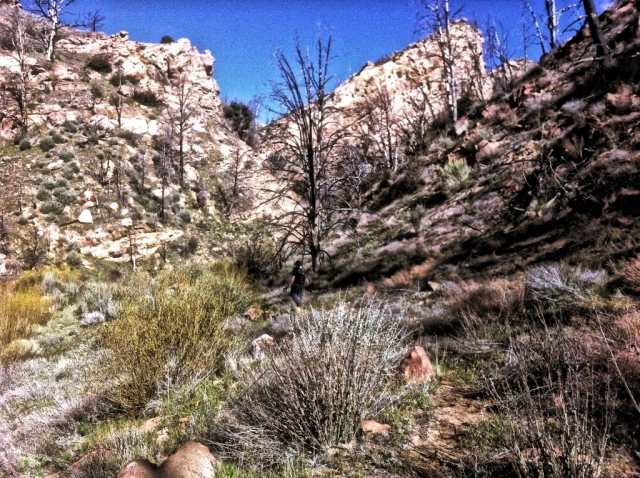 Stillman walking down what is perhaps the best section of the Deal Canyon Trail, as also shown in the next two photos below. 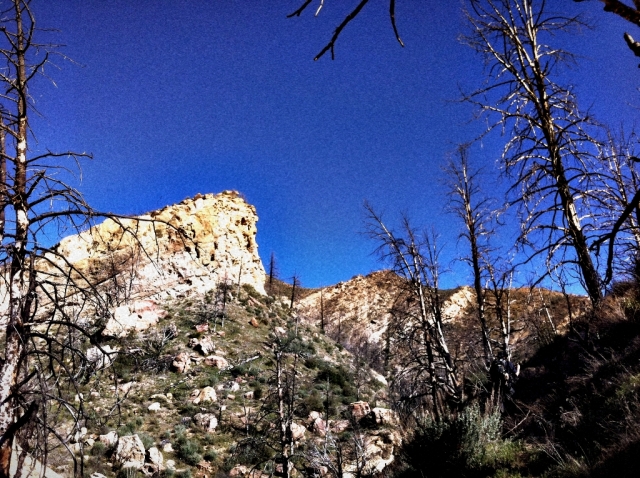 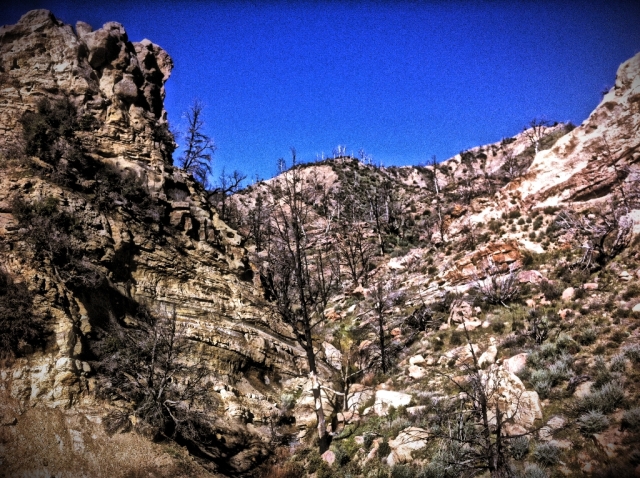 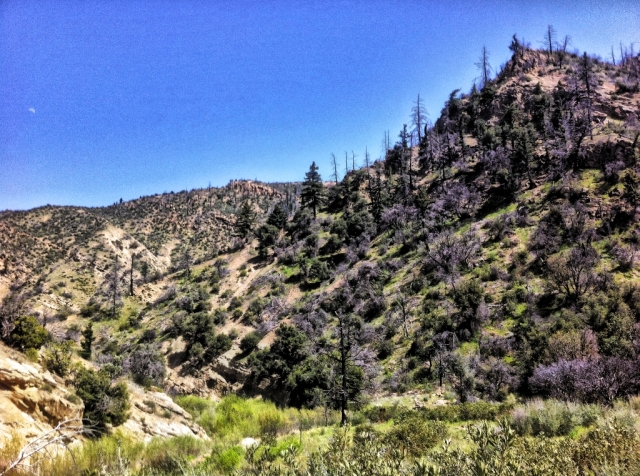 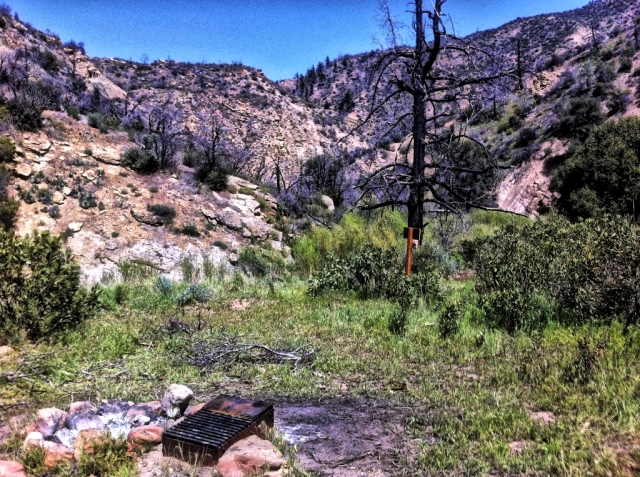 The red dot notes the location of Deal Junction Camp. 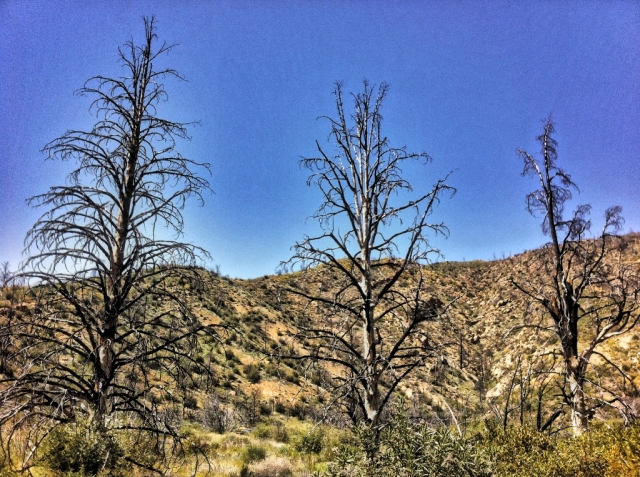 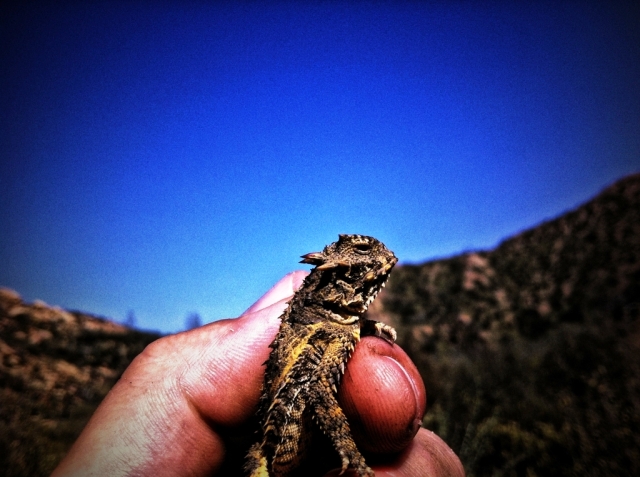 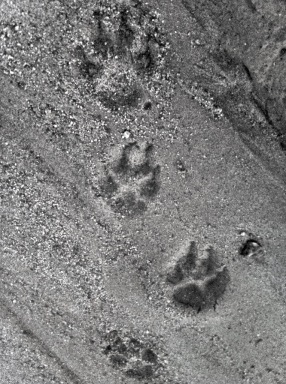 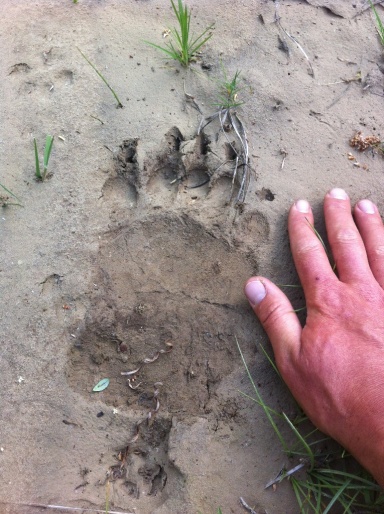 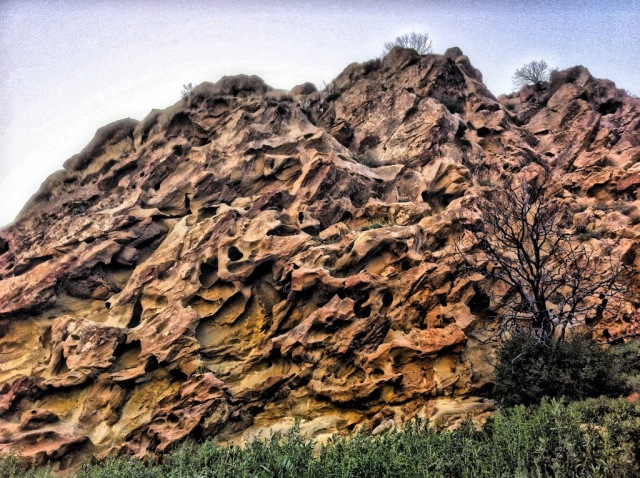 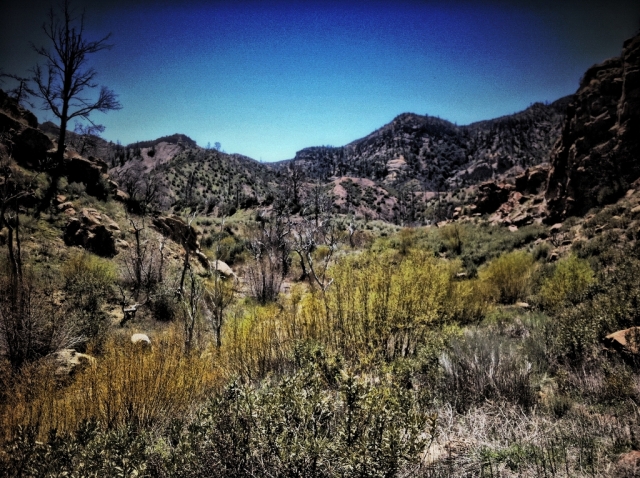 Looking upstream at Upper Rancho Nuevo Camp. The camp is located in the midground just left of center. 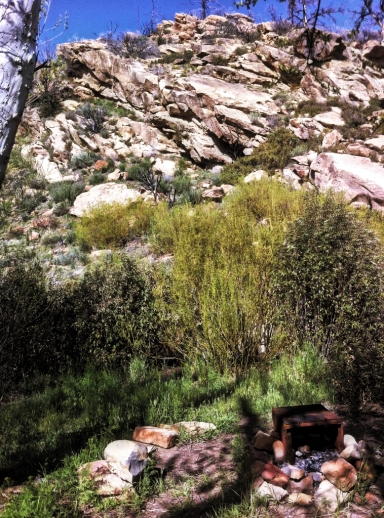 Looking downstream over Upper Rancho Nuevo Camp, which is located about center frame under the burnt trees at the foot of the rocky ridge on the right. 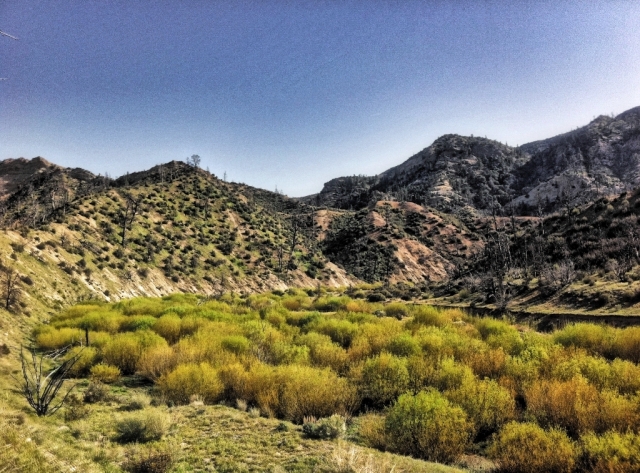 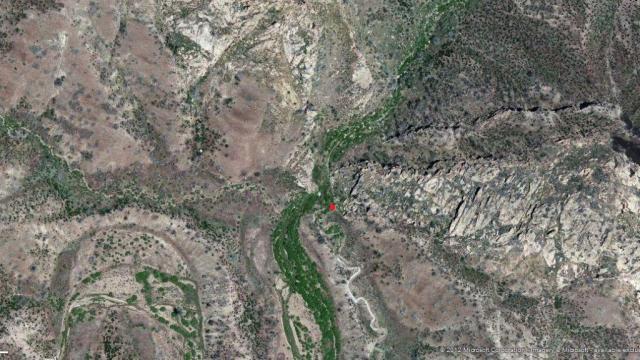 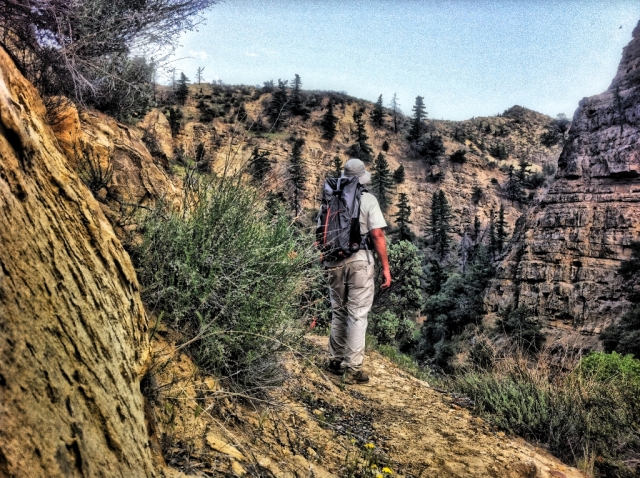 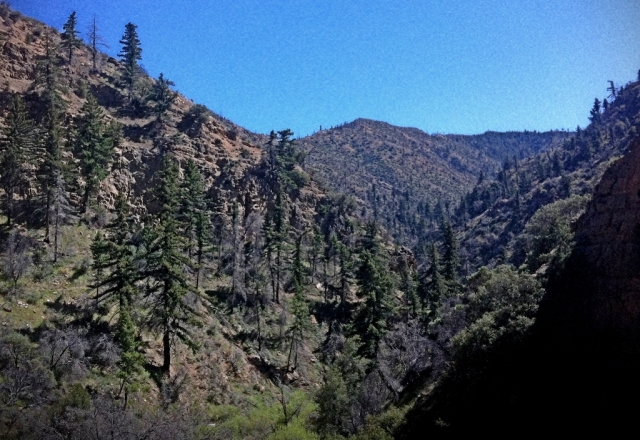 Another view of lower Rancho Nuevo Canyon from the trail, which is faintly visible leading from left to right through the pines. 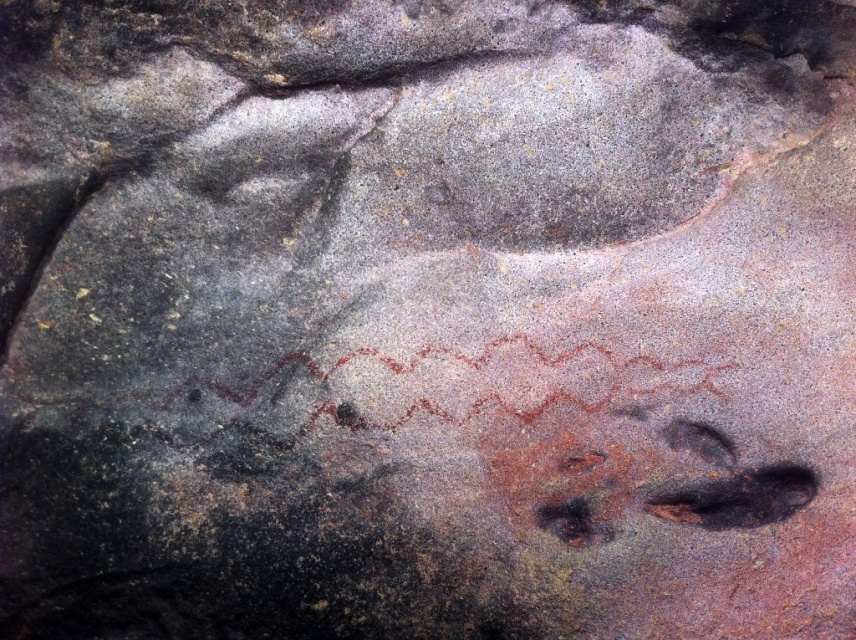