Gladiator Games of Bulls and Bears: Sport of Roping Grizzlies (1911)

This post is the fourth and final entry in a series: 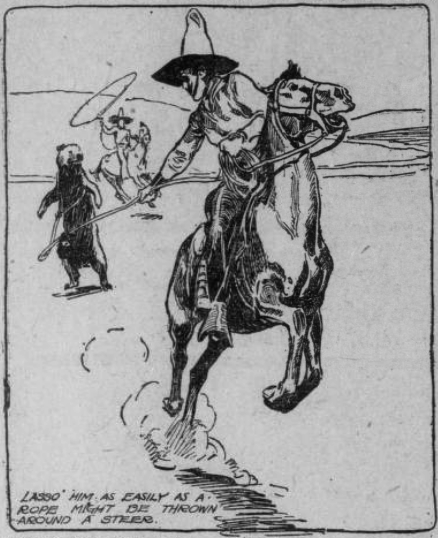 “Once in the ring at Ventura a mighty grizzly lassoed and brought captive into Ventura but three days before, started lopping toward a lean, wiry Spanish bull that was pawing up the dust in the corner of the arena. In the flash of a second the bull charged; the bear rose on its hind feet so that a man would have seemed a pygmy beside it. Never had there been so brutal and thrilling a spectacle in Spanish California.”

The following article appeared in the San Francisco Call on January 15, 1911.

The upper Ojai valley lies between the oak clad flanks of Sulphur mountain and the bare gray cliffs that line the sides of the Topa Topa range in their dizzy ascent of a sheer 3,000 feet. At this time of the year the scouts of coming pigeon flocks are taking note of the supply of feed, a filmy blue haze floats down the Ojai and, in the early dawn before the wind in the trees, the shrill of the locust and the innumerable voices of the forest have come in with the new day, one may hear the tinkle of the belled cattle on the distant slopes of Sulphur mountain and the faint, bleating bark of the wild foxes. Now and then, indeed, there may come the shrill whining yell of a mountain lion, calling like a child in agony.

Once the upper Ojai was the most famous hunting ground in all Ventura county. There, in the early days of California, came both Indians and white men in quest of game. Here, too, came the four footed hunters, mountain lions, that followed the wandering bands of deer and huge grizzly bears that would knock down a heifer on the range as easily as a cat destroys the mouse with which it has been pawing.

In the ’60s and as late as the early ’70s grizzly bears were a common sight in the mountains of Ventura county. They alone of the all wild creatures became ever bold enough to contest the country with mankind, a fact which rendered these huge creatures an easy prey, not to bullets, for a grizzly may charge a mile or more and destroy his assailants even if shot in a dozen vital places, but to the handiest devices employed by the Spanish vaqueros (cow punchers), the lasso.

Because grizzly bears could be easily lassoed there were held in old Ventura town in the early days some of the strangest battles ever known—fights between huge grizzly bears, huge steer killers that never had been weakened by captivity, and the lithe, thick necked Spanish bulls, sharp of horn, quick of foot, always ready for a fight and with a charge like that of a catapult.

In the fight between the bulls and the bears Bruin usually came off second beat. Although a grizzly can easily knock down the greatest steer when he approaches him by a flank attack on the range, he would generally be unable to resist the furious charge of the bull in the arena. The old Spanish bull was ready to fight at the drop of the hat. He had a thick arched neck, sharp pointed horns, was light and quick of foot and could turn a corner as sharp as a cotton tail rabbit. When the bull would be loosened into the arena–Woof! Up would go its tail, down would go its head, and like a flash it would charge the bear with an impact that could not be resisted.

In its attack in the arena the bull exhibited greater cunning than the bear and a less disregard of consequences. The old time Spanish bull had a way of starting his charge from the side. His first few steps would be sideways and this would completely baffle the bear, which would almost always anticipate a frontal attack and plan to break the bull’s neck with a pat of the paw as the bull charged past. Once in the ring at Ventura a mighty grizzly lassoed and brought captive into Ventura but three days before, started lopping toward a lean, wiry Spanish bull that was pawing up the dust in the corner of the arena. In the flash of a second the bull charged; the bear rose on its hind feet so that a man would have seemed a pygmy beside it. Never had there been so brutal and thrilling a spectacle in Spanish California. In an instant the bull struck the bear knocking it several feet backwards. There was a confused struggling mass. Then the dust cleared. The bull lay dying, the bear was fatally gored and afterwards shot and sold by a butcher. This was an exception.

Usually a bull and a grizzly would not engage in the fight with equal vigor. The Spanish bulls were as wild almost as the bears themselves, and sometimes both would hang around the edges of the arena, so disturbed by the sight of the crowds that each for the moment was forgetful of the sight of the traditional enemy.

In the upper Ojai lives Thomas Clark, a wealthy old timer and widely known, who came there in 1868 and has lived in the same spot ever since. It was from Mr. Clark that the writer gleaned this story. Clark is as hale as a well seasoned oak. When he came to the upper Ojai the sight of a grizzly was a common one to him, and his young wife thought no more of a deer loping down the mountain slopes than would a city girl who sees a sparrow.

Clark was a companion of former United States senator Thomas R. Bard. Many a time in the old days the two young men tramped through the mountains making surveys, and so it happened that the pioneer came to know the grizzly as one knows his neighbors. In his first years in Ojai Clark found that the grizzly regarded man sometimes with complete indifference, sometimes with hostility and but rarely with fear. When a bear did slink out of sight it was generally because the great animal regarded discretion as the better part of valor. Once Clark saw three grizzlies, a huge male, a she bear and a half grown bear, plan the killing of a great steer. The killing took place in full daylight on an open plain, and the bears paid no attention to Clark, who stood in the open about 150 yards away. The cattle were grazing in an open space, and a few moments before the attack was made Clark saw the bears slowly shuffling up a narrow arroyo. All at once the three bears separated. In less than half a minute a bear rolled out of the fringe of willows that ran down like a point in the little plain. The bear was doubled up and bounded along like a football rolling toward the cattle, which, instead of fleeing, pricked up their ears and slowly approached the amazing spectacle. Suddenly at angles from either side of the plain the two other bears rushed forth, and almost before one could tell what had happened the larger of the two bears had reached the great steer that, engaged in the engrossing diversions of the bears, was unprepared for the attack, and with a paw heavy as lead and soft as velvet had felled the steer to the earth.

In five minutes since Clark had first seen the grizzlies they had devoured a large part of the steer.

Clark had traveled to the Ojai from Sonora and Marin counties. In Marin county he had seen the tracks of old “Club Foot,” a giant grizzly for which bounties from $500 to $2,500 were offered in different California counties. In Ventura county he again met with old Club Foot’s tracks. The huge bear traveled at night and wandered from Sonoma and Mendocino counties as far south as San Bernardino. Always he crossed the upper Ojai at the same point, and it was said he bore a hundred bullets. Once Clark met a hunter with a pack of hounds who was on the trail of Club Foot. He had followed the bear from Santa Cruz county, he said, but had been unable to come up with the bear. Near Los Angeles the hounds had run into Club Foot and were all killed by the huge bear, but the trapper got a new pack of dogs and, says Mr. Clark, he finally killed old Club Foot in the San Bernardino mountains and obtained the reward.

The carcass of Club Foot dressed more than that of the average steer. For years his coming and going had been recorded by the print of a huge misshapen paw, once caught in a trap. 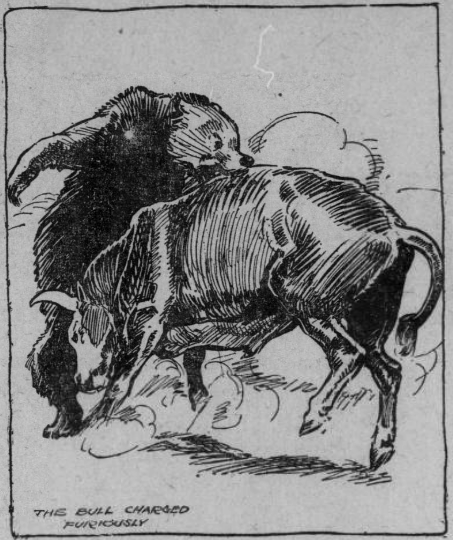 But back to the fight between the bulls and bears.

Bull and bear fights have been held by the Spanish people since the first Latin races went to the Pyrenees. The grizzly of California is bulkier, more powerful and desperate than the brown bears of Europe. It usually took four men to lasso a grizzly, and the vaqueros of the Ventura range were equal to the job. The west never had better cowboys than the Spanish or Mexican cow hands in early California days.

They were daring, certain and dextrous, and so it happened that the vaqueros would ride out from Ventura to the upper Ojai long before morning and would have reached the stamping grounds of Old Ephriam when the first dawn came. Almost always, says Tom Clark, they would get a bear. Usually the vaqueros separated, riding on ridges and overlooking the surrounding country and the deep brush covered arroyos. When bruin was sighted shrill yells would proclaim that the quarry had been seen. Not much lassoing could be done in the brushy spaces, although the vaqueros were amazingly expert in getting through the brush. The slim little cow ponies needed room to get away. But in any ordinary country, brush or no brush, the vaquero would ride up within throwing distance of the grizzly and lasso him as easily as a rope might be thrown around a steer. When the rope was first thrown over the bear’s neck, or around one of its legs it would be no more to the great creature than a fly. Usually Old Ephraim would charge at the horseman, who would ride sideways, keeping the rope taut. Finally the bear would stand on his hind legs and slowly coil in the rope with his paws, pulling both horse and man toward him, this, of course, would be only possible if the bear could get some purchase on the ground. Not one nor even two vaqueros on horseback would be a match for a grizzly bear, because old bruin generally had more pulling power than a pony on a brushy hillside, and because, too, the country would not always permit two horsemen to pull from different directions. But after the first noose had settled over bruin’s head a second would usually come whizzing and soon the big bear would find itself held taut from three or four angles by as many vaqueros.

After that it would only be the work of a few moments to truss the great bear up, load him on a wagon and take him to Ventura, where for the amusement of the crowd who would gather on a holiday afternoon, he would be pitted against a Spanish bull.