A smidgeon of Piedra Blanca.

“Civilization has a relatively precarious hold on us and there is an undoubted attraction in a life of absolute freedom once it has been tasted. The ‘call o’ the wild’ is in the blood of many of us and finds its safety valve in adventure.”

—Percy Fawcett, legendary British explorer of the Amazon who vanished without a trace in the “green hell” of the jungle in 1925 never to be heard from or seen again.

After confirming a plan with Stillman to hike up to Pine Mountain Lodge Camp and descend Piedra Blanca Creek, I spent the next week dreading it. How easy it would be to not wake up when it’s dark, to not haul my butt up three thousand feet of mountain in six miles only to turn around and hike down the mountain, without a trail, over unknown terrain.

But the self-imposed forced march is always inevitable. There is something deeply ingrained in me that, sooner or later, always wins out and compels the body to follow the order of the mind. One week I’ll be stumbling back to the trailhead thoroughly exhausted with aching muscles, repeatedly wondering why I do this to myself, while also thinking that at least now I’ve had my fill for awhile. Yet, by the next week my mental half is already Jonesing to get out and punish my physical half some more.

As ridiculous as it is to compare anything I’ve done or ever will do to the adventures, in the true sense of the word, of Percy Fawcett, I suspect I am routinely driven into the woods on long and sometimes grueling hikes by a strain of pathology similar to what propelled him into the jungle time and again. 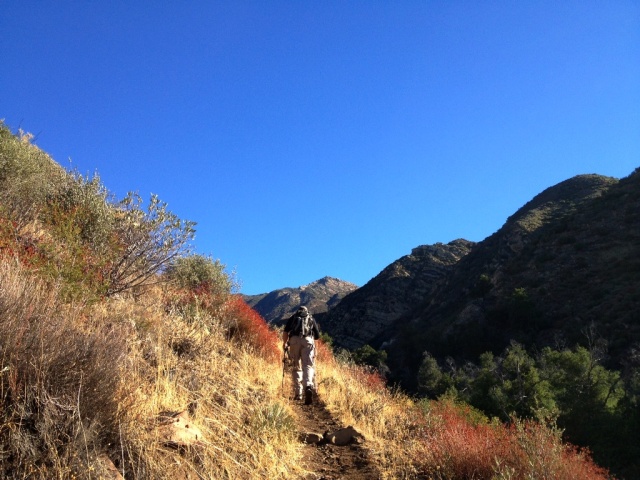 Piedra Blanca Creek emerges from a crease in the mountaintop, just above Pine Mountain Lodge Camp (PML), a thin brook winding through the rocky high conifer forest alongside the backpacking camps. Neither of us had laid eyes upon the upper length of this creek aside from its headwaters around the campsites.

A short distance below PML prime was a stretch of the unknown. There was even the potential for a chance at encountering some degree of relative adventure. What was there? Waterfalls or caves and incredible sandstone outcrops? Endearing creekside flats perfect for camping but that are never visited? Remnants of historic Americana? Traces of prehistoric Native Americana? It was the lure of the unknown and an unanswered question of how it might proceed. It was tempting. And irresistible. 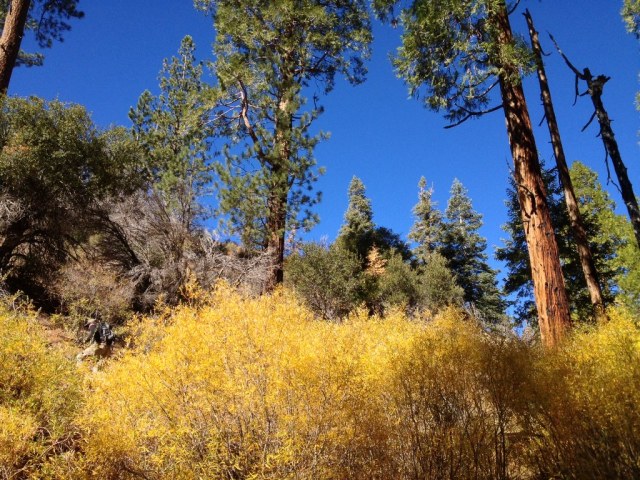 Fall color in the Sespe Wilderness.

We knew there was no official trail. I was operating on the premise that there wasn’t likely much to see in the upper reaches of Piedra Blanca Creek; little that might set it apart from the other creeks in the neighborhood; nothing that would attract the average hiker.

Despite not thinking I was going to find the extraordinary, I nonetheless felt compelled to put in the strenuous work required to survey the land on foot myself, never satisfied sitting at home scanning through other people’s photos and brief captions via the Internet. Even if I had heard that there was nothing remarkable to see, I’d still have gone. I can’t help it. And much that might be said to be ordinary or unremarkable by most people usually hold a greater degree of value to me. 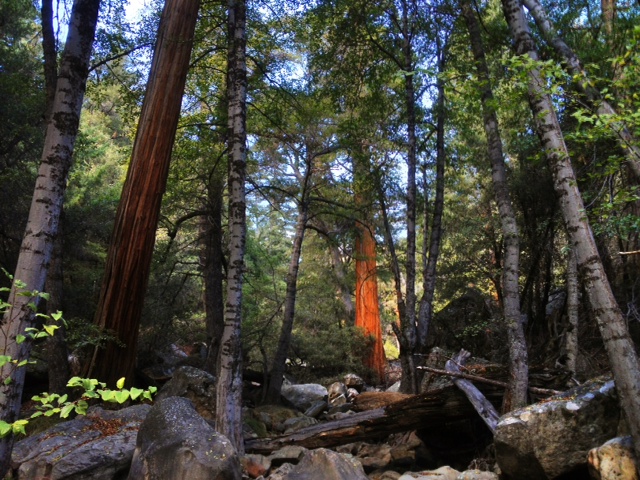 Hoping boulders down the creek, I turned for a view of my backtrail just as a beam of sunlight shot through a gap in the clouds illuminating a massive old-growth cedar and bringing out its characteristic brilliant red hue. 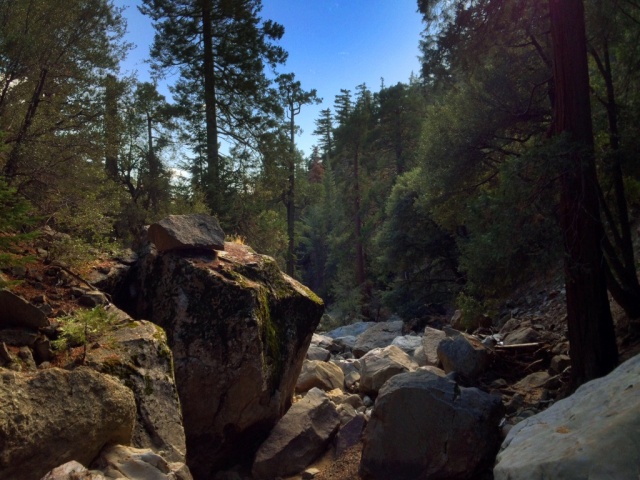 The gnarled fingers of a giant cedar growing midstream.

This was my first hike of autumn and what a glorious day for it, just following the first rainfall of the season. So long had it been dry. The sky was a brilliant blue, but daubed here and there with just the right touch of white clouds, sometimes puffy, sometimes torn and wispy, to add character and depth to the crystalline air, which was freshly washed and filled with an invigorating mélange of earthy and herbal fragrances, newly moistened soil and damp chaparral.

We walked up on a large black bear, which we may have come face to face with had our timing been less than a minute different. We had been downwind from it and sufficiently quiet enough that it might have told its friends the same tale as I have here, that it unknowingly walked right up on two humans.

I had heard the crack of some bending branches or bushes, but had dismissed it as a deer. When we passed around a boulder blocking our view we saw it traipsing away only to pause once up the slope and out of the creek and give us a good stare down. I didn’t much like the way it looked at us.

We came across a remarkable amphitheater-shaped outcrop or grotto over which the creek flows. Beneath the overhang it was felted over in dense dark green moss and embellished with delicate fern fronds poking from the cracks in the sandstone.

The woods through which the creek flows exude a primeval ambiance. A keen eye, however, may spy telltale signs of previous human passing. But just a couple, and only minute and subtle traces. It’s wild up there. Remote. Shadowy and mysterious with a tinge of creepiness. Big timber. Big boulders. Big beasts. It is legitimate big mountain terrain and wildness quite unlike what might commonly be thought of as typical forest found so close to Ojai and Ventura. 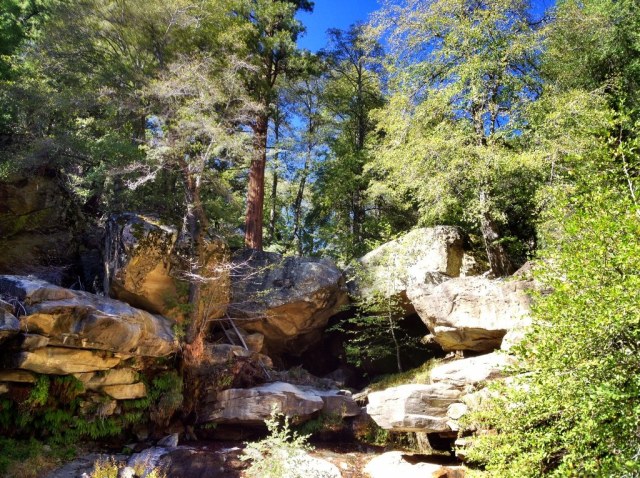 And then, leaving the open tall timber, and falling lower in elevation, we entered into the range of chaparral and the creek suddenly became choked with dense brush and brambles. I went from standing erect and easily hoping boulders while scanning the surrounding conifer-clad slopes, to crouching, scrambling and crawling under a frustratingly thick tangle of overgrowth spread across the creek like a sieve straining the runoff of flotsam during winter storms.

Getting stabbed, poked, and sliced. Incessantly impeded and pestered. And unable to see much more than what was passing within a short distance before me. When possible I’d stand craning my neck straining to see where in the canyon we might be, and then sulk in contempt at how much farther we had to fight our way through the nightmarish tentacles of brush.

Approaching a dry waterfall just prior to entering the unpleasantly brushy section of creek.

We finally broke through onto the official trail once again. That is always a refreshing feeling, to set foot onto a wide-open, well-packed trail that requires so much less physical effort and seemingly zero mental attention, after barging through woody and wiry mountain weeds constantly searching for the path of least resistance.

While I had satisfied my curiosity in experiencing firsthand what that stretch of the wilderness was made up of, the craving for yet more of the same, always coursing through my interior, would soon yet again make itself known. It’s insatiable.